HIDE AND SEEK (IN IRELAND)

The Beloved and I just returned from a week in Ireland.  Our itinerary included University College Cork and Dalkey (a suburb of Dublin where Harriet O’Donovan Sheehy, Maeve Binchy, Bono, Van Morrison, and other notables live).   And the sun shone for all but one day.

When I first visited Ireland, continuing my work on the short-story writer Frank O’Connor, I didn’t expect to find jazz.  In fact, in those pre-iPod days, I brought pounds of CDs, trying to prevent the deprivation that I was sure would befall me.  But jazz kept on popping up to surprise me.  I heard CDs by guitarists Louis Stewart and Hugh Buckley, and was invited to jam sessions featuring Toddy’s Hot Stompers and other congenial assemblages.

So I shouldn’t have been surprised this time when I stumbled onto my favorite art form.

But I was.  People who love this music are forever lamenting dwindling audiences, the closing of clubs, the names in the obituary pages . . . . with very good reason.  And the sweet ubiquity of jazz in my childhood — Louis and Duke on television, Jimmy McPartland playing a free concert in a Long Island park, Bobby Hackett on the radio — is surely nostalgia rather than current reality.  These days, I can expect to hear Ben Webster as dinner music only if I’ve put his CDs on while the chicken is roasting. 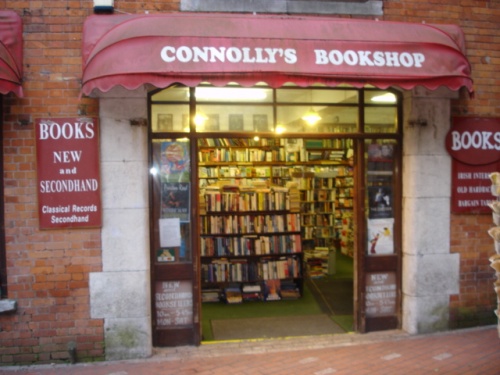 And yet . . . . there was Denise Connolly’s fascinating Cork bookshop.  It was a sweet, enlightened disorder of books of all kinds, opera records, and more.  But what caught my attention was the music coming out of Ms. Connolly’s mini stereo system: Django Reinhardt and Stephane Grappelly playing “Limehouse Blues,” then “I’ve Had My Moments,” and more — vintage 1937.  When I told her how delighted I was by her soundtrack, she smiled and said that, yes, Django, Lionel Hampton, and Thelonious Monk were her favorites.  Visit Connolly’s Bookshop, not only for the jazz, but the books!

And the HMV store on Grafton Street has sections devoted not only to Louis and Duke, but also to Bix Beiderbecke and Humphrey Lyttelton. 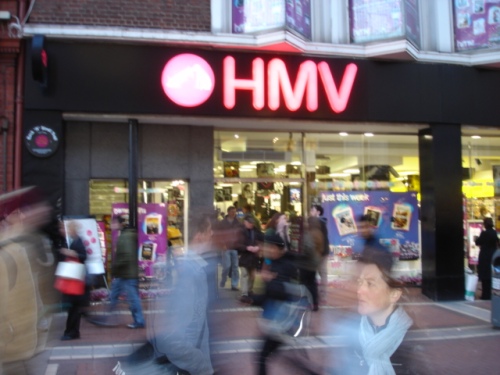 It did my heart good.  Just when I thought jazz had gone into hiding, it poked its head out of the shadows and gave me a big wink.

Posted in The Things We Love

“There are eight million stories in the Naked City. This is one of them.” That was the introductory voice-over I remember from the fabled television show depicting New York City’s urban grittiness. I don’t know how many stories there are as I write this in July 2008, but here is my story — one man’s nearly obsessive quest to soak up all the choice live jazz possible before leaving New York for a long pastoral summer vacation. The score at the moment is (approximately) four Kellsos, two Asheries, two Aldens, one Hendricks, and so on. Tally up the totals at your own peril.

On Sunday, June 29, I took my position at THE EAR INN (326 Spring Street), knowing that the Earregulars would swing out in inimitable fashion, and a quartet of Jon-Erik Kellso, Dan Block, Howard Alden, and Frank Tate devoted themselves to some surprising music: a rousing “Ring Dem Bells,” “When I Take My Sugar To Tea,” then, joined by the brilliant alto / flute player Andy Farber, who leads his own seventeen-piece band at Birdland on Sundays, they stretched out on “Russian Lullaby” and “Sometimes I’m Happy,” before ending with a jam session on “Honeysuckle Rose,” made even more brilliant by violinist Craig Eastman, Frank Tate’s talented cousin.

The music was stirring, the camaraderie was happy: I got to meet and talk with the owners of an upscale Australian chocolate company (www.chocolategrove.com), Will and Dianne Muddyman, in town to show off their products at the Jacob Javits Center. They are a lovely couple, funny and well-informed: we were trading names of Australian jazz heroes in spirited fashion.

On Tuesday, July 1, I made my way to ROTH’S WESTSIDE STEAKHOUSE (630 Columbus Avenue at 93rd Street) to hear the weekly duet — in this case, pianist Ehud Asherie and Howard Alden. Listening to their inspired teamwork, I thought often of the 1941 “Waiting for Benny” warmup session captured by Columbia’s engineers that brought together Charlie Christian and Johnny Guarneri, Alden’s single-string lines perfectly complementing Asherie’s stride and walking tenths. Their repertoire was magically wide-ranging, moving without strain from Waller’s “Viper’s Drag” and “I’m Crazy ‘Bout My Baby” to Monk’s “Ruby My Dear,” Morton’s “Shreveport Stomp” and “King Porter Stomp” with all their strains properly attended to, as well as a Fred Astaire cluster of “Change Partners” and “I Won’t Dance.” Barbara Rosene (high-class local talent) sat in and sang a pretty, yearning “I’m Confessin’,” and the duo offered a delightful Brazilian contrapuntal song, “Lamentos,” which was new to me (Ehud said it was a choros, although whether I am using the term correctly I have no idea).

Here, too, the pleasure was personal as well as gustatory (he steaks are excellent at Roth’s): I met the genial owner Marc Roth, a committed-to-the-point-of-piety jazz fan who donates his time and energies to the Jazz Foundation of America. It was a real pleasure to meet a club owner who sees good music as integral to his business.

Two days later, I visited Ehud and Jon-Erik again, this time for a Thursday duet session at SMALLS (183 Tenth Street at Seventh Avenue South) with the compact room filled more than usual, which pleased me greatly. As I climbed downstairs, they were floating through a truly slow “Keepin’ Out of Mischief Now.” The tempo made that song (often turned into a quick-step) into a wistful love ballad. But their next tune, a “Whispering” that kept turning into “Groovin’ High,” was just as rewarding, and I noted that these two players have been more intuitively connected each time I’ve heard them — two like-minded improvisers turning into a team reminiscent of Hackett and McKenna, Braff and Hyman. It was a most rewarding hour.

Oh — and the personal angle? When I walked in, I heard a pleased voice (in an accent that wasn’t Queens) say my name, and I turned around to see a beaming Will and Dianne at the bar. We had an even more lively chat afterwards — with hopes for a more leisurely encounter in the future.

We didn’t hear any live jazz on July 4 — but since Louis thought that day was his birthday, it has the status of a sacred day.

On Saturday, July 5, the Beloved and I went to the JAZZ STANDARD (116 East 27th Street) to catch the early show of what was billed as “Lambert, Hendricks, and Ross Redux,” featuring one of the elders of the tribe, Jon Hendricks — now eighty-six, dapper and bouncing in a yellow blazer — his daughter Aria, and the anchor of the trio, Kevin Burke Fitzgerald. At eighty-six, Hendricks manages vocal calisthenics with the skill and wit of a man one-third his age. He led the trio rather than keeping up with it. Aria has a lovely, supple vocal instrument and a dynamic stage presence; Fitzgerald not only sang his parts wonderfully but stopped the show twice, hilariously impersonating a muted brass player, then an arco bass soloist — magical impersonations, theatrical as well as musical. He’s a true star and he deserves to be widely known.

Sunday, July 6, was a Kellso-and-friends doubleheader. I found my way to a new spot in the Broadway restaurant district, the sympathetically-named BOURBON STREET (346 West 46th Street), where the band was scheduled for their first brunch appearance (12-4). All the omens and portents were good: the restaurant is a huge space, two floors with high ceilings, marble floors, and a wrought-iron balcony. This isn’t simple decoration: the band was positioned on the second floor, playing without amplification, and their sound was brilliantly resonant, the room “live” the way such places used to be. The quartet was an uptown version of Kellso’s gifted crew, with Dan Block on clarinet and tenor, John Gill on banjo, guitar, and vocals, and Kelly Friesen on bass. And I got to sit with Doug Pomeroy, renowned audio engineer and deep-dyed jazz listener, so that we could trade inside stories.

Musically, it was one of those extra-special occasions where the jazz was quiet but rose to new heights on every song, from a hymnlike “Old Fashioned Love,” to a floating “I Can’t Believe That You’re In Love With Me,” and intense explorations of “Wabash Blues” and “Apex Blues.” Jon-Erik and Dan are profound soloists and deeply attuned team players, filling gaps, finishing each other’s sentences. Kelly Friesen nimbly managed to bring together the great slap-bass he learned from Milt Hinton and witty bebop references. John Gill provided his own recogniable pulse, wonderful chord voicings — and his own Bing Crosby-inspired versions of “When You’re Smiling,” “an uptempo “Pretty Baby,” “Sweethearts on Parade,” and — for a socko finish, “When Irish Eyes Are Smiling.” The Irish connection? One of the owners, Brian Connell, hails from Blanchardstown, a Dublin suburb, and we traded local lore. I hope that the place prospers as a site for live jazz: the acoustics are wonderful, the food delicious, the staff cheerful.

After a brief interval devoted to non-jazz realities, I drove downtown to The Ear Inn for a hail-and-farewell* Sunday night with The Earregulars — Jon-Erik, trombone marvel Harvey Tibbs, bassist Pat O’Leary, and guitarist Chris Flory — joined for the second set by Dan Block, on his third gig of the day. If the mood at Bourbon Street had been distinctly New Orleanian, this band had its heart firmly set in late-swing-early-bop (think 1946 Savoy, Keynote). Perhaps without any hidden egocentrism, they chose songs for the second set that had their first word in common: “I Never Knew,” “I Want A Little Girl,” “I Would Do Most Anything For You,” a heartfelt “I Only Have Eyes For You,” featruing Dan, Chris, and Pat, and “I Want To Be Happy.” A closing “C Jam Blues” broke the pattern but was a delicious slow-rocking exploration. I got to chat with Jackie Kellso and the young trombonist Emily Asher (known for her work with the ensemble “Mighty Aphrodite,” which lives up to its billing) — another pleasure.

I don’t know if I could keep up this pace on a regular basis — occasionally my eyes threatened to close of their own accord, and I did go outside and stand on the street between sets to gulp some air — but my jazz marathon was richly rewarding.

Never fear, though, loyal readers: I will be posting on this blog wherever I go.

*I was doing the farewelling: happily for New Yorkers, that band will continue even when I’m not there.  Reassuring, that.

Posted in Ideal Places, Jazz Titans, The Heroes Among Us, The Things We Love