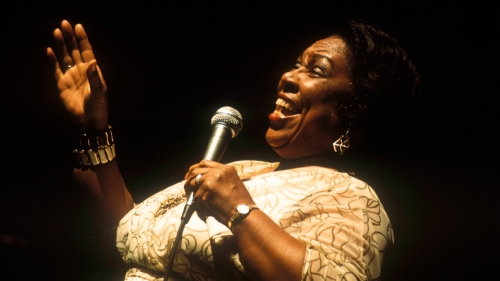 I saw and heard Helen Humes in person only once, in 1975, but she made a lasting impression.  When Ed Polcer was leading the band at the last “Eddie Condon’s,” marvelous players and singers were invited to get up on the narrow bandstand and astonish us.  I was there because Ruby Braff was leading the group; Helen came up and sang IF I COULD BE WITH YOU and ON THE SUNNY SIDE OF THE STREET, and I have a clear memory of her beautiful smile, heartfelt delivery, and warm voice.

At the early peak of the Swing Era, John Hammond had yet another one of his good ideas: to feature Harry James (then in his first year as a star of the Goodman band) with a small group drawn from the Basie band.  There was a clear rapport, and these under-acknowledged records stand alongside the more heralded Wilson-Holiday sessions.  Helen had recorded a decade earlier, but she was then perceived as a classic blues singer, and those records show only one side of her considerable talent.  In these 1936-38 sides, we hear what made her memorable.  (On YouTube, you can hear the other sides from the James sessions.)

On January 5, 1938, the same group reassembled, with Vernon Brown replacing Eddie Durham, and Helen sang IT’S THE DREAMER IN ME:

Other aspects of these recordings (of the two glorious sessions) are memorable: the warm sounds of Harry and Herschel, the beautiful distractions of Jess Stacy at the piano, joined by Walter Page and Jo Jones . . . but at this remove, Helen wins my heart — her deep sincerity, her vibrato, the way she delivers two love songs with complete conviction, even at the faster tempo of the first.  She’s been overshadowed for decades, but what a great artist she is.  In a few minutes, she invites us to live her dreams.

Posted in "Thanks A Million", Bliss!, Generosities, Irreplaceable, It's All True, Jazz Titans, Pay Attention!, Swing You Cats!, The Real Thing, The Things We Love