Again, rambling through eBay — very soothing especially if one doesn’t feel compelled to spend money — I found this wonderful artifact:

This was near the end of Annette’s career, so there are no commercial recordings of her performing the song.  However, it was popular enough that three are available to us on that lopsided cosmic jukebox called YouTube.  And the eBay seller took pictures of all the pages — so you can, as they used to say, try this out on your piano.  Here’s an early version (late November 1934) well-played dance music by Don Bestor with Joy Lynne singing:

Howard seems to be influenced by another popular pianist-singer.  Who could it be?  But first, more sheet music. 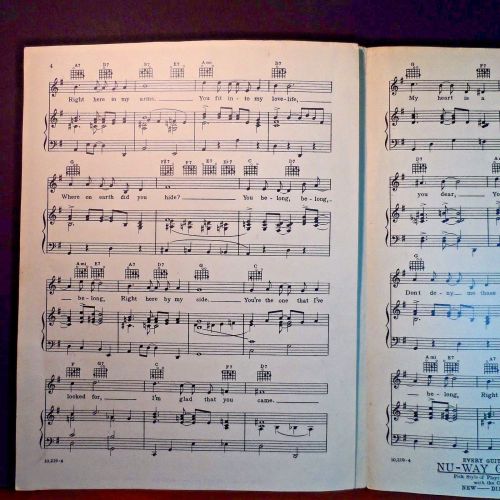 then, the Master, in dewy form, with the Blessed Bill Coleman of Paris, Kentucky, alongside Gene Sedric, Charlie Turner, Al Casey, and Harry Dial — one of the best early Waller dates:

and, for the finale: 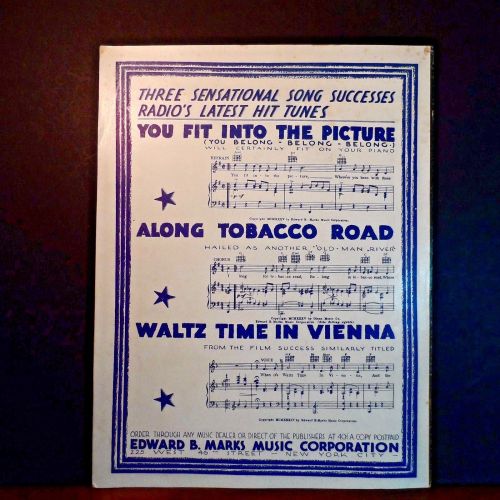 I don’t covet a time machine, but it is sweet to dream of a time and place where this was the popular music one would hear from one’s radio.

THE MANY LIVES OF “DINAH LOU”

“DINAH LOU,” music by Rube Bloom and lyrics by Ted Koehler, from the 29th COTTON CLUB PARADE, perhaps would have gotten less attention and affection if it had not been the subject of several memorable recordings.

A footnote: the song was composed several years earlier, and recorded by Red Nichols (leading an expert but little-known post-Pennies Chicago band) at the end of 1932: I hope to share that disc in a future posting. 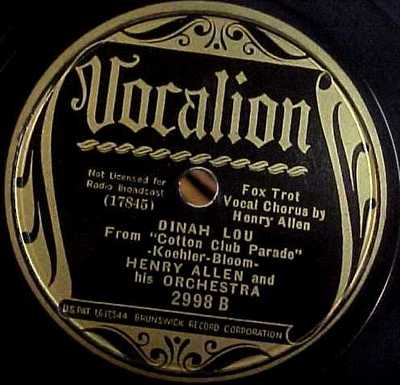 The first version I encountered was Red Allen’s, from July 19, 1935, with Henry “Red” Allen, J.C. Higginbotham, Albert Nicholas, Cecil Scott, Horace Henderson, Lawrence Lucie, Elmer James, Kaiser Marshall.  Notably, it was the first of four songs recorded at that session — a warm-up, perhaps, for the delightful Frolick that is ROLL ALONG, PRAIRIE MOON.  I think you can hear what captivated me years ago: a good song and lots of very satisfying, individualistic melodic improvisation: much art packed into a small package:

On August 1, Chuck Richards sang it with the Mills Blue Rhythm Band — Red was in the band, but sang on the Bloom-Koehler TRUCKIN’.  However, he takes a soaring solo — more in a Louis mode than his usual way — with marvelous interludes from Billy Kyle, J. C. Higginbotham, and Buster Bailey.  Richards was a competent balladeer, but to me the real star here is the band, with a very lovely reed section:

On January 20, 1936, Ivie Anderson sang it with the Duke Ellington Orchestra (three takes, of which two survive).  I don’t know which of these two was recorded first, but I’ve distinguished them by sound and length.  Talk about wonderful instrumental voices — in addition to Ivie, whom no one’s equalled.

The motive behind this leisurely long satisfying performance may have been nothing more complex than “Let’s stretch out and keep taking solos,” but it works so splendidly: hearing this is like watching two marvelous tennis players volley for hours with the ball always in the air.  It feels very much like a magical return to a late-Thirties Basie aesthetic, with none of the usual patterns of an opening ensemble giving way, after the horn solos, to rhythm section solos.

Will anyone adopt DINAH LOU as a good tune to improvise on in this century?

Posted in "Thanks A Million", Bliss!, Generosities, Irreplaceable, It's All True, Jazz Titans, Pay Attention!, Swing You Cats!, That Was Fun!, The Real Thing, The Things We Love, Wow!

And are you free to join me uptown — Thursday night into Friday morning — for some remarkable hot jazz? 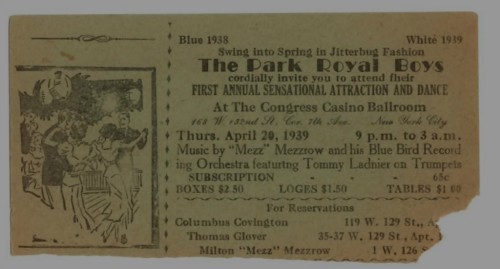 It’s not every day you get to hear Milton “Mezz” Mezzrow and his Blue Bird Recording Orchestra featuring Tommy Ladnier on Trumpets, is it?  I have never been to a Sensational Attraction and Dance, myself.

Here’s the official invitation if a newspaper clipping seems too gauche: 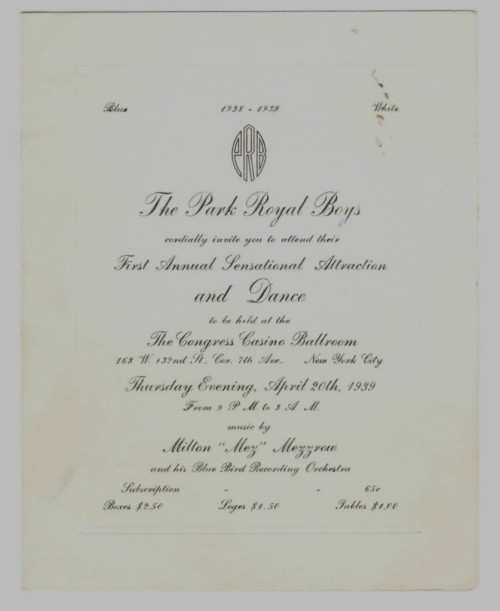 I want to know who else was in the band.  Teddy Bunn, Elmer James, Manzie Johnson, James P. Johnson, Wellman Braud, Zutty Singleton . . . .?  And who knew that Mezz was living at 126th Street and Fifth Avenue at the time.  Tommy Ladnier, alas, would be dead on June 4.

Who were the Park Royal Boys?  And when did the Congress Casino Ballroom become an office building or an apartment complex?

Thanks to David J. Weiner, sleuth extraordinaire, for this eBay find!

Posted in "Thanks A Million", Awful Sad, Hotter Than That, Ideal Places, Irreplaceable, Jazz Titans, Swing You Cats!, The Real Thing, The Things We Love

Last week, the Beloved and I were in a highly-recommended multi-dealer antique store in Sebastopol, California, picking up this, commenting on that.  Happily we don’t “need” to buy everything, so we aren’t faced with housefuls of antiques.

A dull brown folder about the size of a ten-disc 78 record album caught my eye.  It contained more than a hundred matchbook covers glued to black scrapbook pages.

Its owner, I am guessing, had been a traveling salesman or the like in the late Thirties and early Forties — a cosmopolitan fellow, eating fried chicken in Utah, having drinks in Buffalo.  Some of the matchbooks were clearly early World War Two, urging the holder to do something that would take a whack at Hitler.

Many of the covers featured mildly naughty illustrations: the one at top wasn’t the most enticing, but it did stop me in my survey.  It wasn’t just the scantily clad young woman or the pun on Roosevelt’s New Deal, but I remembered the “Harlem Uproar House,” paradoxically located seventy-five blocks south in midtown, as a place with serious jazz connections.

Late in 1937, Milton “Mezz” Mezzrow, a man with large dreams, rehearsed and led a mixed jazz band — Caucasian and African-American players, which he modestly called the DISCIPLES OF SWING.  I don’t  have my copy of REALLY THE BLUES nearby, but I recall the band had Frank Newton, Sidney deParis, Zutty Singleton, Gene Sedric, George Lugg, Willie “the Lion” Smith, Elmer James, and perhaps Happy Caldwell in its ranks.  But the world — even the sophisticated Broadway audience — was unwilling to countenance black and white playing together, and swastikas painted on the club ended the engagement in a week.  (It’s painful to recall, but New York was full of such sentiment: the potato farms on Long Island made room for meetings of the German-American Bund, and “America First” was part of the current dialogue.)

I wanted to offer JAZZ LIVES readers their own “nude deal,” and some online research was enlightening.  When you went to the Harlem Uproar House, there was a minimum charge of $1.00 after 10:00 PM; the drink menu started at fifty cents and went up to ten dollars for a quart of champagne.  A shrimp cocktail was fifty cents; broiled Maine lobster $1.50.

This wooden postcard obviously dates from the same time as the matchbook: 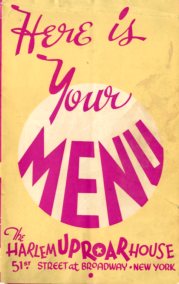 I note that the blue image suggests that the club offers A NEW DEAL IN NIGHT LIFE, a more well-behaved advertisement suggesting that you and your girl could go there and swing out — especially if she is so beautifully dressed.  Did NEW DEAL replace NUDE DEAL, or the reverse?  My fashion-conscious readers can tell me the name of her outfit; the dance historians among my readers can no doubt identify the swing dance they are doing.

Aside from imagining how Mezz’s band sounded and wishing for a menu with 1937 prices, this is where my research came to an end.  More information, anyone?  and if anyone has any airchecks of the Disciples of Swing, those wouldn’t do us any harm, would they?  Although I have dark imaginings that Mezz took most of the solo space or at least he played along with the other improvisers, as was his habit.  Oh well.  Anyone who even envisioned a band with Frank Newton and Zutty Singleton in it can be forgiven a great deal.

Posted in "Thanks A Million", Ideal Places, Mmmmmmmmmmmmm!, Pay Attention!, Swing You Cats!, The Real Thing, The Things We Love