Now you know the truth — none of this New Orleans mythology.  Jazz came here to Tiffin (south of Toledo) as the performance below shows. 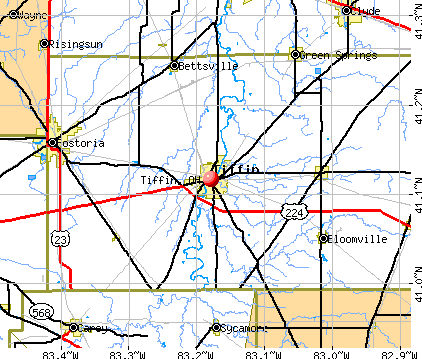 The exultant event you will see and hear took place thirty years ago, in July 1989, and was recorded by Bob and Ruth Byler — before digital video, but the music roars through, sweet, hot, and expert.  (Bob left us in April 2018 at 87; Ruth had died earlier.)  While I was still hiding a cassette recorder in an airline bag, hoping to go undetected at concerts, Bob was capturing hours and hours of live music on video.  Here is the 2016 post I wrote about Bob’s archive. 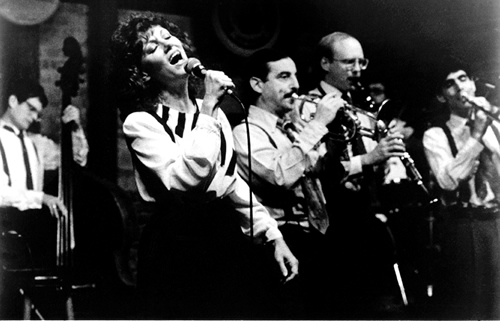 Banu Gibson and the New Orleans Hot Jazz Orchestra (properly titled) offer what I can only describe as a hustling lyricism — free-wheeling improvisations within carefully-worked-out routines, with a glorious sense of Show, even comedy (“Show ’em how it comes apart!”), as well as a marvelous intuitive synergy between the horns and the rhythm section.  And Banu is so full of lovely energy that she never seems to stand still: her voice a caress a la Connee Boswell or a roof-raising shout, as the song dictates — full of power but also exquisitely controlled.  Singers could learn so much from watching her perform, and the same is true for players.

This concert is a complete lesson in “how to put on a show,” and how to pace a program.  Although the repertoire was far from new in 1989, not a note seems tired or formulaic (and the arrangements are both lovely and exceptionally well-played, often suggesting a 1936 swing band).

In case the players are not familiar to you (and how could this be?): Banu sings, plays guitar or banjo on the instrumentals; Charlie Fardella, cornet; David Sager, trombone, vocal on SOME OF THESE DAYS and MAKIN’ FRIENDS; Tom Fischer, clarinet, tenor saxophone, vocal on I WOULD DO ANYTHING FOR YOU; David Boeddinghaus, piano; James Singleton, string bass; Hal Smith, drums.  They are perfectly splendid.

The songs are DOWN IN HONKY TONK TOWN / THE WANG WANG BLUES / MAHOGANY HALL STOMP (instrumental) / TIN ROOF BLUES / HELLO, LOLA (instrumental) / I’VE GOT WHAT IT TAKES / MUDDY WATER / SOME OF THESE DAYS (vocal Sager) / I’M GOING TO CHARLESTON BACK TO CHARLESTON / CAKE WALKIN’ BABIES FROM HOME / intermission / TRUCKIN’ / I MUST HAVE THAT MAN / I WOULD DO ANYTHING FOR  YOU (vocal Fischer) / MAKIN’ FRIENDS (vocal Sager) / WHAT A LITTLE MOONLIGHT CAN DO / WHY DON’T YOU DO RIGHT? / I GOT RHYTHM //

I haven’t explicated all the delightful surprises — you can find them for yourselves, such as Banu’s duets with Fardella, and the exuberant solo work — but so much of the energy of this performance comes from Ms. Gibson herself, with the vocal power of a young Merman and the joyous energies of, let us say, Gwen Verdon.  She captivated the audience then and does so now.

The video isn’t a sophisticated multi-camera shoot; the audio is occasionally slightly hard to hear; the video has the slight murkiness of digitally-recovered VHS tape — but this is precious.  And since I’ve had the pleasure of meeting and hearing in person every one of the stars on this stage with the exception of Charlie Fardella, whom I’ve only encountered on disc, I can say that this is a glorious record of the talent still at work in New Orleans and elsewhere.

I don’t know what the Tiffin audience members said when the powerful applause died down, perhaps, “That was a very nice show.  Let’s buy one of her records?” but now, thirty years later, this video record of a concert seems a precious gift to us all.  Thanks to everyone on the stage, to Bob and Ruth Byler, but especially to David Sager, who set this post in motion.

Mark Cantor, jazz film scholar, is one of those rare beings animated by knowledge and generosity in equal portions.  I’ve never met him in person, but I’ve been delighted by what he knows about jazz and popular musicians of the last century in their often uncredited film appearances . . . and by his willingness to share, not only data but the films themselves.  Evidence of the latter can be found right here on his YouTube channel.

On Saturday, March 23, 2013, at 8 PM, Mark will be offering another one of his famous jazz film programs — this one so rich with material it has a double title: STOMPIN’ AT THE SAVOY / SWING, SWING, SWING.  Mark’s films will concentrate on the great bands and singers who either performed at Harlem’s famed Savoy Ballroom or who should have: Louis, Ella, Chick, the Savoy Sultans, Erskine Hawkins, Basie, Duke, BG, Bob Chester, and some rarities that can’t be seen elsewhere.  The place is the Jewish Community Center of San Francisco’s Kanbar Hall, 3200 California St., San Francisco, CA 94118 (415-292-1233).  For ticket information, click here or here.

The Beloved and I will be there, smiling at the screen and at Mark.  Come join us!

Just in case you’ve never heard of Mark, and wonder whether his collection is worth a trip from your apartment, I present here two of his (annotated) short films that I love.  Neither will be on the March 23 bill, which is all the more reason to share them here.

THE CAPITOLIANS (directed by Walt Roesner, 1928) — a must-see for anyone who likes spectacle or hot jazz / dance music or both:

Posted in "Thanks A Million", Bliss!, Generosities, Hotter Than That, Ideal Places, Irreplaceable, Jazz Titans, Pay Attention!, Swing You Cats!, The Heroes Among Us, The Real Thing, The Things We Love, Wow! 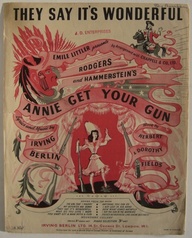 This beautiful Irving Berlin love-ballad was first sung by Ethel Merman (and her male partner, Ray Middleton) in ANNIE GET YOUR GUN (1946) — and it has been treated lovingly by all manner of singers and instrumentalists — Sinatra and Ruby Braff, Johnny Hartman and John Coltrane, Doris Day, Sonny Stitt, Jimmy Scott . . .

I think that “wonderful” used to mean worthy of our amazed admiration, full of wondrous things.  It seems an appropriate description for the music at The Ear Inn every Sunday night from 8 – 11 PM.

Posted in "Thanks A Million", Bliss!, Generosities, Ideal Places, Irreplaceable, Jazz Titans, Pay Attention!, Swing You Cats!, The Heroes Among Us, The Real Thing, The Things We Love