Thanks to my sharp-eyed friend Andrew Jon Sammut*, I am now in possession of this Ancient Writ, the inexpensive pages a beguiling yellow. Its owner loved, used, and admired it: as the creases and fingermarks on the back show.

It allows us another way to experience — perhaps at a distance — the legerdemain of Pee Wee Russell.

Those of us who revere certain musicians know enough to be mildly suspicious of these folios.  The more idiosyncratic a musician’s style, the less likely it could be reproduced as a series of notes on paper.  Also, the  “method books” that propose to be presenting solos performed by our heroes are often untrustworthy.  Did Dave Tough or Cliff Edwards ever sit down to create the books that bear their imprimatur?

Apparently many famous “name” musicians were paid to come to a  studio to record one-chorus solos on songs owned / published by Feist.  The recorded solos were then transcribed and clarinet players (for instance) could have something they could read, study, copy, emulate. Some of this information is hypothesis; some of it is supported by the issuing, years ago (on one of Bozy White’s SHOESTRING vinyl records) of choruses recorded by Bunny Berigan for just this purpose.  The pioneers in such endeavors were Red Nichols and Louis Armstrong.

This folio is not dated, but the one-page introduction refers to Pee Wee’s work with Eddie Condon, Bobby Hackett, and Bud Freeman, so I would place it no earlier than 1938 and perhaps more into the very early Forties. Whether it was connected to Charles Peterson’s famous photograph of Russell in LIFE I cannot say, but he surely was enjoying sufficient fame — as the antidote to Goodman and Shaw, perhaps? — to be awarded such an honor.

I am struck by how very uncomfortable Russell looks in his photograph: needing a haircut (or is it the shadow of the bright flashbulb?) and without a mustache. Perhaps the recordings were done in the morning, which might make any jazz musician look haunted, despairing:

And the main event: 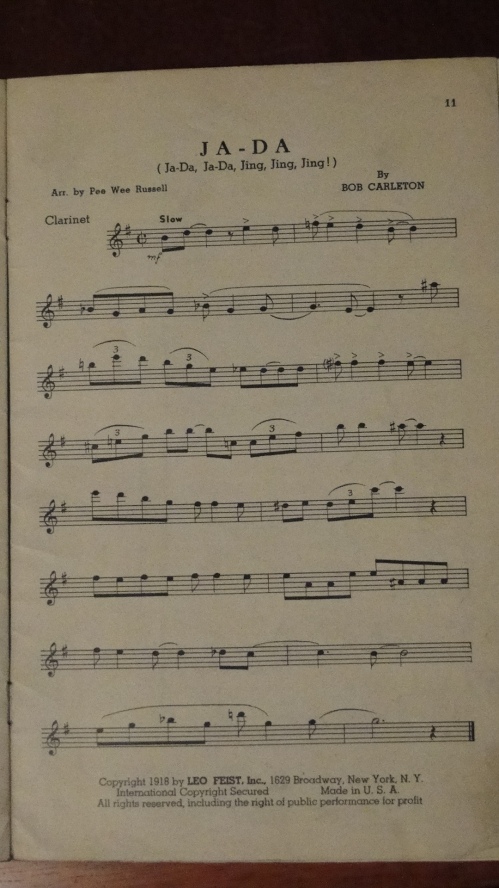 I haven’t had the time even to try that on the piano, but it strikes me as quite simple — for the student clarinetist — one of those muttering-around-the-melody first choruses Russell loved so.  How would the transcriber have notated the growls and surreal arching sounds that Pee Wee made?  (Think of SERENADE TO A SHYLOCK, for example.) I don’t know, and perhaps it is best that the attempt was not made.

Here’s something that would elude all but the most subtle transcriber, Pee Wee’s solo (beginning at 1:30) on the 1936 Louis Prima CROSS PATCH, a marvel of sound:

To return to the All-Star Series of Modern Rhythm Choruses (ask for that at your local music shop in one breath!) I think it plausible that after Charles Ellsworth Russell recorded ten one-chorus solos, and was given (let us hope) fifty dollars at least in cash, he never thought of his morning in the studios again. But we, now, have another little sliver of Russell to consider into the twenty-first century.

I plan to pack this book with my clarinet — which I used to play quite amateurishly and now perhaps will sound even worse — to take to California. Whether my squeaks and moans will be my own or Russellian, I can’t say. But perhaps I can be inspired by his courage.

*Andrew wrote his own marvelous post on the Feist folio created by Buster Bailey here. As you’ll see, my effort above is what jazz critics would call “derivative” and “imitative”; I call it homage to an inspiring friend who is on the same path. And this post is for Stan Zenkov, another inspirer!

Posted in "Thanks A Million", Bliss!, Generosities, Irreplaceable, It's A Mystery, It's All True, Jazz Titans, Jazz Worth Reading, Pay Attention!, Swing You Cats!, That Was Fun!, The Heroes Among Us, The Real Thing, The Things We Love, Wow!