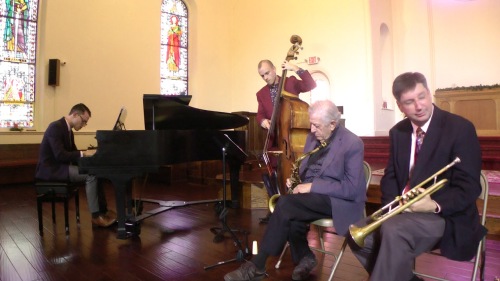 Everyone’s bliss is different.  But for me, one version is being close to and recording a small group of creative musicians playing splendidly, listening attentively to one another in a quiet space in front of a rapt audience.  It’s bliss when it happens, and also because it happens so rarely. 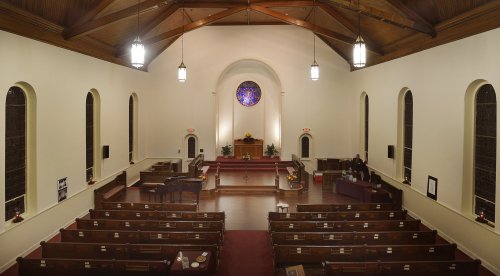 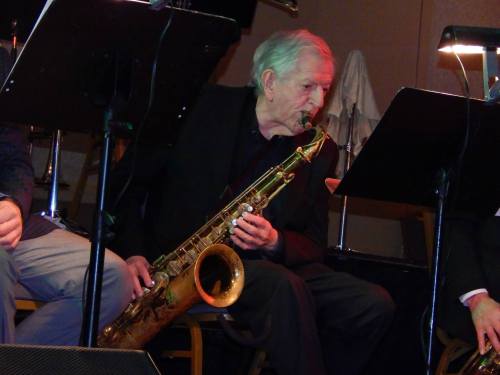 They began with I’LL ALWAYS BE IN LOVE WITH YOU, which although it did not begin life as a swinging tune, Count Basie made it so — as do they:

What followed continued to make me and the rest of the audience happy, but if this quartet had decided that enough was enough with this single performance, I would have been satisfied.  Slightly mystified, but smiling.  But I am thrilled they continued.

The lovely MY IDEAL (check out the lyrics if you don’t know them):

Danny picked up his new / old Eb alto horn for MOOD INDIGO.  Wait until the end, after the last notes, for his musicological commentary and a patented Tobias comic flourish:

Danny’s own HOW’S IT GO? — based on chord changes that were part of the common language when there was one:

Get up, stretch, find some snacks, and the second half will be posted shortly. I bless these four creators and thank them as well.  Thanks also to Bob and Helen Kull, for making the 1867 Sanctuary a shrine for wonderful art.  This post is for John Scurry, John Herr, Sam Taylor, Melissa Gilstrap, and R1, of course.

NPR wasn’t there.  PBS was off covering something else.  Too bad for them.

But last Sunday night, The EarRegulars offered a master class at The Ear Inn.  Anyone could attend.

Their subject?  Duke Ellington called it “bouncing buoyancy,” his definition for the irresistible levitation that swinging jazz could produce.  I call it floating — the deep mastery of rhythm, line, and invention that one hears in Louis, Lester, Benny Carter, Jack Teagarden, Jo Jones, Teddy Wilson, Sidney Catlett, and on and on.

The audience at The Ear Inn (326 Spring Street in Soho, New York City) may not have known what they were hearing, but I am sure it was absorbed osmotically into their very cells.

And who are these masters, teaching by example?  The co-founders of The EarRegulars, Jon-Erik Kellso and Matt Munisteri, on trumpet and guitar, joined by bassist Neal Miner and someone I’d only heard about, tenor saxophonist Alex Hoffman, a young man who’s already playing splendidly.  (Look him up at http://www.alexhoffman.com.)

Later in the evening a whole reed section dropped by, one by one: Andy Faber, tenor; Dan Block, alto; Pete Martinez, clarinet.

Here are a few highlights.  Check yourself to find that you’re still touching the chair seat:

I THOUGHT ABOUT YOU, that pretty rhythm ballad — most of us know it as “I TOOK A TRIP ON A TRAIN,” and so on:

MY WALKING STICK is a wonderful minor-rock with the best pedigree — an Irving Berlin song recorded once by Louis Armstrong and the Mills Brothers, then, forty years later, by Ruby Braff and Ellis Larkins.  This version is the twenty-first century’s delightful continuation, with Professor Kellso walking with his plunger mute:

Another pretty song that rarely gets played is UNDER A BLANKET OF BLUE — the ballad Frank Chace loved.  I know it from versions by Louis, Hawkins, and Connee Boswell, not a meek triumvirate:

Caffeine always helps focus and energize, as does this version of TEA FOR TWO, with Andy Farber joining in.  I don’t quite understand the initial standing-up-and-sitting-down, but perhaps it was The EarRegulars Remember Jimmie Lunceford:

How about some blues?  Better yet, how about a greasy Gene Ammons blues?  Here’s RED TOP, Dan Block leaping in (top right).  Matt Munisteri’s dark excavations made me think of Tiny Grimes, but Matt goes beyond the Master here:

And here’s the rocking conclusion:

Finally, those singers and players who take on HOW AM I TO KNOW often do it at the Billie Holiday Commodore tempo, stretching out the long notes.  But it works even better as a medium-tempo romper: Pete Martinez, seated on a barstool to my left, adds his particular tart flavorings:

And the final tasty minute and twenty-six seconds: