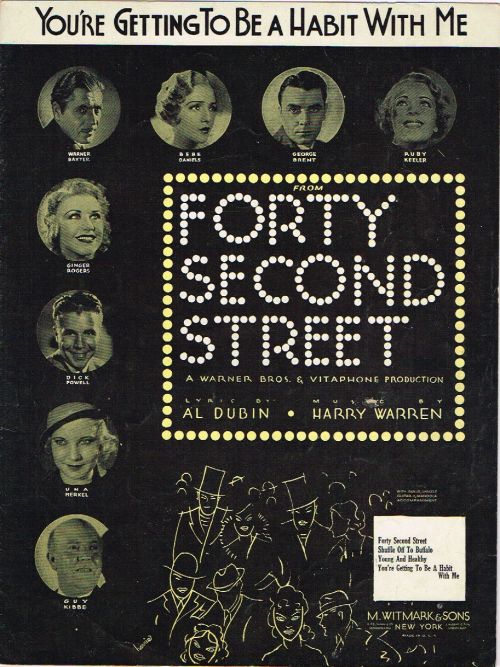 Medical literature warns us about any kind of addiction — from potato chips to more dangerous seductions.  But what about romance?  Doctors Rebecca Kilgore, John Sheridan, Jon Burr, and John Von Ohlen let us know, gently, that being addicted to someone isn’t such a problem (decades before “stalking” entered the list of criminal offenses) using the words of Al Dubin and the music of Harry Warren to explain it all:

Sadly, LULLABY OF BROADWAY, the biography of Al Dubin written by his daughter Patricia, candidly depicts him as addicted to food, drink, gambling, and eventually morphine, dead at 53.  But this light-hearted love song was written when Dubin’s pleasures still allowed him (with Harry Warren) to create one memorable song after another.

This performance is from a set at the 2011 jazz party, Jazz at Chautauqua, which has delightfully morphed, and moved west to Cleveland, to become the current Cleveland Classic Jazz Party — with some of the same performers, this year from September 14-17, 2017.  I’ve been there every year since 2004, and if that counts as an obsession, it’s one I love.

And the medical news is that Rebecca Kilgore’s singing has been proven addictive, but with only salutary effects on the hearer.

My friend Rich Liebman asked me about this now-departed piece of New York archaeology: a record shop in the Forty-Second Street subway station.  He remembers going there in 1959 or 1960 and that the store had a great selection of jazz records.

I couldn’t remember the name, but I have a strong visual memory of being there almost fifteen years later, and purchasing one record only — ROY’S GOT RHYTHM, an Emarcy compilation of Roy Eldridge sides recorded in Scandinavia in 1951.  I also remember that it was dark, predictably, and that all the plastic sleeves covering the records were dirty . . . my hands were unsavory after a good long browse.

Can any JAZZ LIVES reader supply more definite details?  Was the stand (long and narrow, in the fashion of record stores with browsers) called SUBWAY RECORDS or am I, once again, making things up?  Or RECORD MART?

Research!  (I couldn’t find an online image that was sufficiently subterranean to fit: you will have to imagine . . . and then go scrub your hands vigorously.)

Posted in Irreplaceable, It's A Mystery, Pay Attention!, Swing You Cats!, The Real Thing