I read in the December 2008 issue of Jersey Jazz that Dave Tough died sixty years ago on December 6,

1948. Because so many of my musical and spiritual heroes are dead, my devotion to jazz always threatens to turn into sad necrology, but Tough deserves a few words and a few pictures.

I won’t dwell on his near-scholarly intellectualism (rare among jazz musicians in those days) and his deeply self-destructive alcoholism, his frustrations.   William P. Gottlieb’s famous photograph of Tough, working away at his practice pad in the basement of Eddie Condon’s, is on the right.

Rather, I think of a brief list of brilliant recorded moments.  There’s Tough’s luminous, shape-changing drumming all through the 1940 Bud Freeman and his Famous Chicagoans session (most notably available on the Mosaic Classic Condon Mob Sessions), where he shifts from splashing cymbal work to brilliant use of the hi-hat and bass drum, propelling soloists.

It would be difficult to delineate, let alone reproduce, what Tough does so naturally through “Forty-Seventh and State” or “Prince of Wails,” his sound captured with extraordinary clarity in Liederkrantz Hall.  But as marvelous as the horn soloists are, and the under-acknowledged pianist Dave Bowman, I find myself listening to what Dave is playing (and, by implication, choosing not to play) throughout those records.

Two years earlier, although he was reputedly in bad physical shape, he levitated another Bud Freeman date, this one for Commodore, where his wandering, unpredictable work on the jam blues”Tappin’ the Commodore Till” has yet to be equalled.  On that record, Tough comes through as a blindfolded genius, ready to tap on or against anything in the studio, testing the pure sounds he might get out of the equipment around him.  Again, the soloists — Freeman, Bobby Hackett, PeeWee Russell, Dave Matthews, Jess Stacy — are wondrous, but I am distracted in the best way by Tough’s gloriously weird, urging counterpoint.

I was lucky enough to find a Commodore 78 of that — in the days when such artifacts were more easily available — and it ornaments my office wall, a talisman of artistic individuality.

I think also of Tough’s solo –he was repelled by the idea of soloing and did it only under duress — on “Just You, Just Me,” which closes off a Charlie Ventura concert in 1947 — music once available on a Norgran lp and most recently on a Verve set collecting Jazz at the Philharmonic music from the Forties.  Again, Tough explores pure sound as well as rhythm: the solo is even more unusual because it sounds so much like Sidney Catlett, who also played that night.  I suspect that Dave sat down at Sidney’s drums: two kings trading courtesies.

Tough also shines all through a little-known and rarely-reissued 1946 Brad Gowans session for RCA Victor, where Gowans leads his “New York Nine,” featuring his own arrangements loosened up by solos by Billy Butterfield, among others.

Dave was usually happiest in small jamming groups — although concert bills show that he appeared at Eddie Condon’s Forties concerts, he does not appear on any of the famous half-hour broadcasts.  With all respect to George Wettling and Joe Grauso, that’s a real pity.  But the one film clip of Tough has him, all too briefly, amid a 1946 Condon group recorded at the club.  Wild Bill Davison, Tony Parenti, Gowans, Gene Schroeder, and Jack Lesberg are visible, roaring through the end of “Farewell Blues,” in a “March of Time” newsreel called “Nightclub Boom.”

The clip used to be available on YouTube, but it seems to have vanished.  Can any readers help me find a copy to post here?

Here, however, is a Gjon Mili photograph — new to me — taken from LIFE in 1945, showing Condon, Schroeder, Davison, Freeman, Bob Casey on bass, and Tough at the downtown Eddie Condon’s. 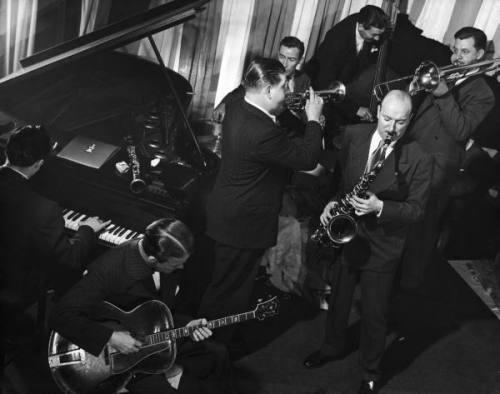 An assiduous listener can find many more glowing surprises in Tough’s work with the big bands of Tommy Dorsey (as well as his sometimes hilarious work with the Clambake Seven), with Bunny Berigan, with Goodman (as well as sessions with the Trio, Quartet, and Sextet), with Artie Shaw (there is a priceless, driving airshot of “There’ll Be Some Changes Made” where Tough pushes the band and soloist Hot Lips Page as hard as a drummer could push); finally, there is Tough’s work with Woody Herman’s First Herd, where he is again well-recorded by the Columbia engineers.

He made only one four-tune session under his own name, and (perhaps typically) it doesn’t show him off all that well.  And there has never, to my knowledge, been a record or compact disc simply devoted to him.  What a shame!

I am sure he would have splendidly fit into the “Mainstream” jazz that prevailed a decade after his death, once “Bop” and “Dixieland” had stopped baring their fangs at each other.

Was Tough someone who said all that he had to say in his brief span of time?  Can we mourn him without thinking gratefully of what he did leave for us?  But like Lips Page, Catlett, Frankie Newton, Charlie Christian, Jimmy Blanton and a dozen others, he left too soon.  I miss them all.

P.S.  In Tom Pletcher’s liner notes to an exquisite Jazz Oracle CD devoted to the music and life of his father, Stew Pletcher, he points out that his father — who knew and played alongside Tough — said that Tough hated being called “Davey.”  Even when Edythe Wright did it at the beginning of “At the Codfish Ball,” no doubt. 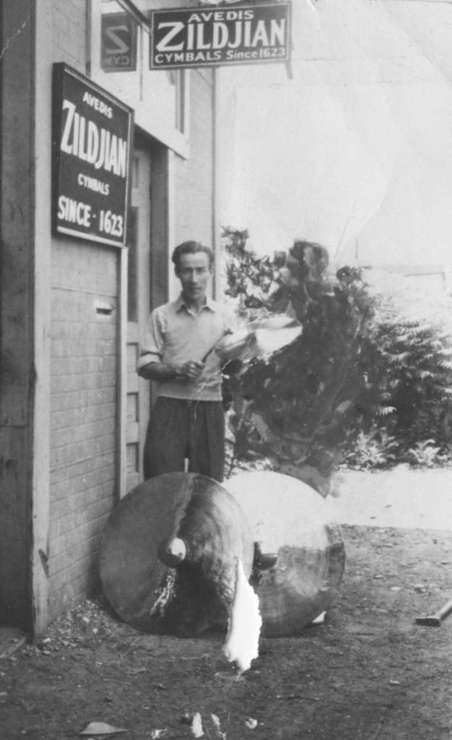