“I ALWAYS BEGIN WITH THE EYES”: MAGDA BOREYSZA’S GLITTERING IMPROVISATIONS

I am neither an art connoisseur or collector, but recently, I have had the wonderful luck of being able to follow three artists, directly or tangentially connected to jazz, whom I also personally admire.  There’s John Scurry and Ivana Falconi Allen.  To that inspiring warm company I now add Magda Boreysza.

I first took note of Magda’s work this summer when I saw this poster, had an immediate fierce infatuation with it, bought two, and spoke with her in cyberspace.  This post is my idea, although many of the words are hers.

She is a three-dimensional jazz improviser, inventing worlds we hadn’t thought of before, populated with immaculately drawn and vividly imagined creatures.  Her scope is ever-expanding: she’s not primarily a “jazz artist,” but those two works — depicted here — were my entryway into her universes. 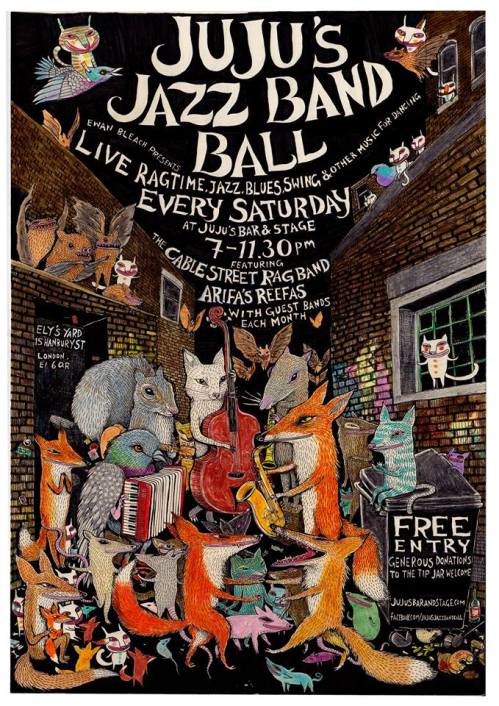 I think of my pictures as stories, and I always start with a character. As I draw, the character tells me what else is happening in the story/picture. I always begin with the eyes. They reveal who the character will be. All my imagery comes from the same world, where the boundaries between human and animal are blurry.

All my work is drawing-based, but I work in different mediums. I self-publish comics, I make painted ceramic masks, I’m a printmaker, and I also make regular drawings, which I sell as reproductions. I found I would rather draw my own ideas rather than working to someone else’s specifications. But from time to time, I will make an album cover or a poster for my musician friends.

Juju’s Jazz Band Ball is an event organized by my friend Ewan Bleach, of the Cable Street Rag Band. He asked me to create a poster, and we agreed that it should feature foxes and other feral animals found in the streets of London. I imagined their wild party, their jazz dance, and I tried to capture that energy as well as a typical alley in the Brick Lane area of London. The animal musicians are based on the band members.

I was born in Poland but mostly grew up in the south of Sweden, before moving to Scotland and eventually to New Orleans. I’m married to a jazz musician, Robin Rapuzzi, who plays washboard and drums in Tuba Skinny. Because of this, I’m immersed in the world of music, and I have myself started playing, mainly the bass drum and some auxiliary percussion. 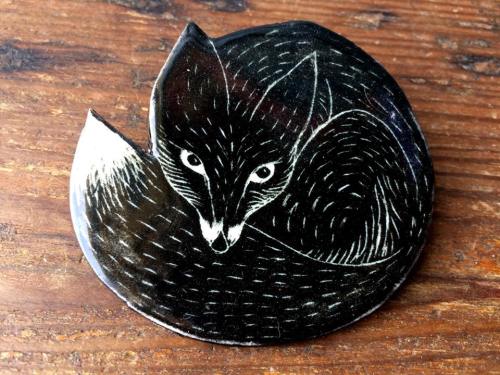 At the Edinburgh College of Art, in Scotland, I specialized in traditional animation techniques, and I made a hand-drawn film for my Master’s — A Game of String, available to stream http://foxandcomet.com/post/113892897077/a-game-of-string-hand-drawn-animation-2010.

As for the Frog & Henry poster, I just wanted to make a silly image, and I was inspired by old cartoons, where objects are sentient. 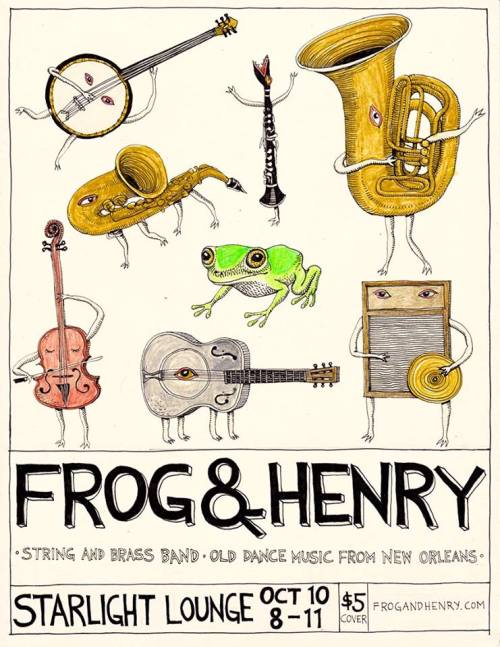 Here is Magda’s Facebook page. You can see more of her work here, and more importantly, you can buy it here.  Her imagination is spacious, sometimes dark and luminous at the same time, and she invites us in.

Posted in "Thanks A Million", Bliss!, Generosities, Ideal Places, It's A Mystery, It's All True, Pay Attention!, Swing You Cats!, That Was Fun!, The Heroes Among Us, The Real Thing, The Things We Love, Wow!