ROSE ROOM, by Art Hickman and Harry Williams, has a special place in the hearts of jazz fans.  It’s a lovely pastoral song from either 1917 or 1918, but several things raise it above the level of the ordinary pre-Twenties pop hit. 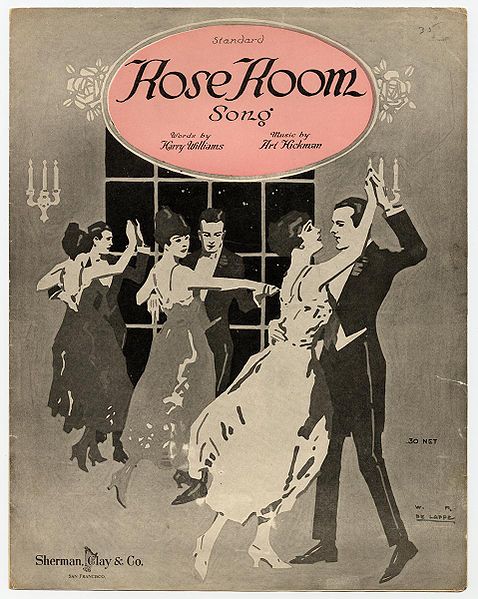 One is that it is famous as the song Benny Goodman called when that interloper Charlie Christian was sneaked up on the bandstand by the meddlesome but inspired John Hammond.  Legend has it that Goodman thought — not a nice thought — that Charlie wouldn’t know the song or would find the chord changes difficult and either be embarrassed or sneak off the stand in disgrace.  Of course, Charlie had no trouble and he played rings around everyone on the stand.  The rest is too-brief history.

Two is that it is the harmonic basis for Ellington’s IN A MELLOTONE.

Three is that it is one of those songs that reveals itself in different, beautiful ways whenever the tempo is changed.  I’ve heard it played as a romp, a saunter (the 1943 Commodore version with Max Kaminsky, Benny Morton, Pee Wee Russell, Joe Bushkin, Eddie Condon, Bob Casey, and Sidney Catlett), and as a yearning love ballad (J. Walter Hawkes, in this century, in live performance).

And four is that there is a Louis Armstrong and his All-Stars concert recorded in Vancouver in 1951.  For whatever reason, Louis was (atypically) not onstage when the concert was supposed to begin, so Barney Bigard, Jack Teagarden, Earl Hines, Arvell Shaw, and Cozy Cole just jammed ROSE ROOM for a start — an easy hot performance.  Were I Ricky Riccardi of THE WONDERFUL WORLD OF LOUIS ARMSTRONG, http://dippermouth.blogspot.com/, I could share it with you right now, but alas . . . you’ll have to imagine it.

But all that is prose.  How about some music?

Last Sunday, the mighty EarRegulars, the reigning kings of small-band swing who appear at The Ear Inn (326 Spring Street, 8-11 PM on Sundays — except this next week, Feb. 6, because of some large-scale sporting event whose name eludes me) took on ROSE ROOM late in the first set.

The EarRegulars were charter members, co-founders Jon-Erik Kellso, trumpet (in a rousing Eldridge mood); Matt Munisteri, guitar; Neal Miner, bass; and the newcomer to The Ear Inn — but not to New York jazz! — tenor saxophonist Tad Shull, who has a laid-back, coasting behind the beat, relaxed Websterian approach that’s very refreshing.  Here’s what they played (with hints of Webster’s DID YOU CALL HER TODAY in the encouraging conversation between Jon-Erik and Tad at the end):

The Ear Inn is dark, but it was sunny Roseland for ten minutes!

REMEMBER: ALL MONEY GOES TO THE MUSICIANS!  SO PLEASE CLICK ON THE LINK BELOW!