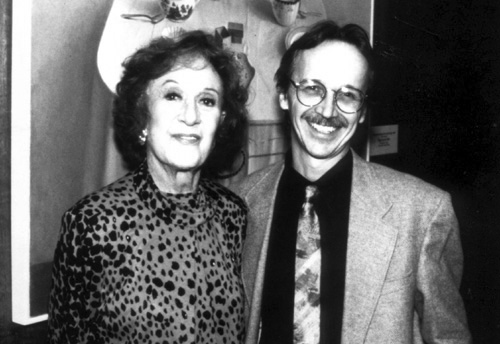 A the end of the preceding century, while many of us were standing at Tower Records, considering which CD to buy, Monk Rowe — musician and scholar — was busy doing good work in the land of jazz.

Monk is a modest fellow, so he will probably protest all this praise aimed at him and say, “It’s not me . . . it’s the Filius Jazz Archive at Hamilton College,” but he will have to put up with the adulation for the time being.  Monk’s ongoing gift to is a series of video interviews done with jazz artists and luminaries from 1995 on.  More than 300 interviews have been conducted, and they are appearing — almost daily — on the Archive’s YouTube channel.  Most of the interviews run an hour, which is a wonderful visit with people you and I haven’t had the opportunity for such sustained conversations with.

I confess that I have been slow in alerting JAZZ LIVES’ readers to this magic toybox, because I feared for the collective health.  The interviews are wonderfully informative in a low-key, friendly way — Rowe does not obsess over musicological details but is interested in letting the artist speak — and they are devilishly addictive.  I’ve lost hours in front of the computer because of them, so don’t say I didn’t warn you.

And the interview subjects often are people who have not been fussed over in public — at all or in such gratifying ways.  Here are a dozen names: Manny Albam, Eddie Bert, Bill Charlap, Benny Waters, Keith Ingham, Jackie Cain and Roy Kral, Sherrie Maricle, Stanley Kay, Grover Mitchell, Rossano Sportiello, Ron Carter — and those interviews have been posted on YouTube in the past month.  Let that sink in.

Here’s Monk himself — in under two minutes — introducing the channel.  You can see how low-key and amiably focused he is.  He mentions the book that he co-authored, drawn from the interviews: I’ve written about it here.

Monk talks to Tom Baker — someone we miss seriously — in 1997: it amuses me that this interview was recorded in a corner of the Hotel Athenaeum at Chautauqua, New York — the fabled home of Jazz at Chautauqua:

and the illustrious Marty Grosz in 1995:

Kenny Davern, Part One, in conversation with Dr. Michael Woods:

Set aside a few weeks: this is much more rewarding than several semesters deep in the Jazz Studies curriculum, I assure you.  And I haven’t even included Helen and Stanley Dance, Vi Redd, Ruth Brown, Jean Bach, Jerry Jerome, Chubby and Duffy Jackson, Ralph Sutton, Bob Wilber, Joe Wilder, Sweets Edison . . . . that you can do for yourself.

Posted in "Thanks A Million", Bliss!, Generosities, Irreplaceable, It's All True, Jazz Titans, Pay Attention!, Swing You Cats!, That Was Fun!, The Heroes Among Us, The Real Thing, The Things We Love