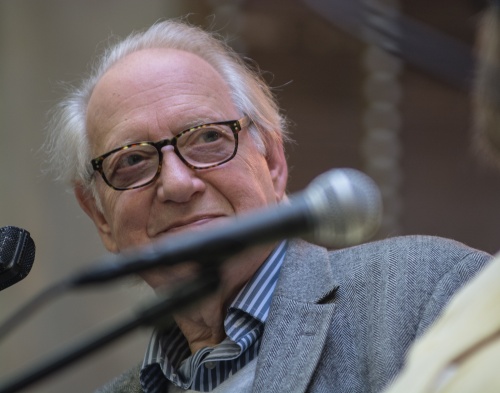 On this wintry day — the blizzard outside my New York window looked like bits of ripped-up tissues falling from the skies — what could be more warming than thirty-five minutes with Dan Morgenstern telling tales of his Chicago days, including the story of Gene Ammons’ release from jail?  And Dan reminds us that jazz “is a communal music,” and tells tales of King Kolax and jazz on television as well:

Thank you, Dan, for warming not only this day but any other day you’re on the scene.

Notice that the group is — as they used to call it — “mixed.”  Condon not only played the right changes and set good tempos; he never cared what his musicians looked like as long as they could play.

And solo features for Hot Lips Page and James P. Johnson?  Be still, my heart.

Ella is the much-loved daughter of Ricky (THE WONDERFUL WORLD OF LOUIS ARMSTRONG) and Margaret Riccardi, but their attentive jazz parenting isn’t limited only to those people deep into swing.  Parents and grandparents, take note!

Posted in "Thanks A Million", Ideal Places, Mmmmmmmmmmmmm!, Pay Attention!, Swing You Cats!, The Heroes Among Us, The Real Thing, The Things We Love

This YouTube gem is taken from an appearance (on French television?) in 1980 by the Concord All-Stars: Warren Vache, Jr., on cornet and flugelhorn; Scott Hamilton, tenor; Dave McKenna, piano; Cal Collins, guitar; Michael Moore, bass; Jake Hanna, drums.  Their TEA FOR TWO turns into a late-swing line by Coleman Hawkins (its name eludes me — is it BEAN SOUP or BEAN STALKIN’?).  What impresses me here is how young everyone once was.  The living members of this combo (McKenna and Collins having left us) are still sustaining us, fortunately.

A new YouTube find is this 1962 clip of the wondrous Joe Sullivan playing Fats Waller’s SQUEEZE ME — on Ralph J. Gleason’s JAZZ CASUAL program.  Many of Sullivan’s recordings from the Fifties onward find him at too-fast tempos: this one is marvelously even-tempered.  I am reminded that an early Sullivan original was called JUST STROLLING, which is what he seems to be doing here.  Until, of course, one watches closely and marvels at the combination of down-home textures and deep subtlety.

Posted in "Thanks A Million", Jazz Titans, Pay Attention!, The Real Thing, The Things We Love

Stride is such a triumph of instinct and athleticism that it always amazes me.  Here’s a rare clip of the American pianist Joe Turner (not to be confused with Big Joe Turner) — who appeared in 1931 as one half of a duo backing the singer Adelaide Hall.  The other pianist?  A kid from Ohio named Tatum.

I love what I call Jazz Manglish — so James P.’s title, an admonitory KEEP OFF THE GRASS, is transformed here into KEEPING OUT OF THE GRASS, which is gentler and more descriptive, but hardly the same thing.  We know what it means, though.  And it seems as if stride demands a cigar — think of the Lion and James P. — although Fats got by with cigarettes.  But he was Fats, of course.

Posted in "Thanks A Million", Swing You Cats!, The Real Thing, The Things We Love