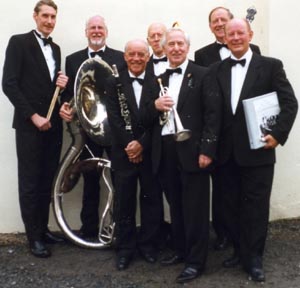 I came very late to this particular party, but happily the party still rocks on in cyberspace.  Let me explain.  The searing yet also lyrical cornet player, singer, and bandleader Ben Cohen moved to another neighborhood in 2002, when he was 73.  I didn’t take notice of his work until last year, when I heard him on a record featuring the late clarinetist Pierre Atlan, which also starred Humphrey Lyttelton — but one side of the disc was a 1987 session showcasing Ben, whose KNEE DROPS astonished me with its hot fluency and mastery.  I regret that I can’t share this music, but the record is on eBay, like so much else (including two CDs featuring Ben, posthumously). 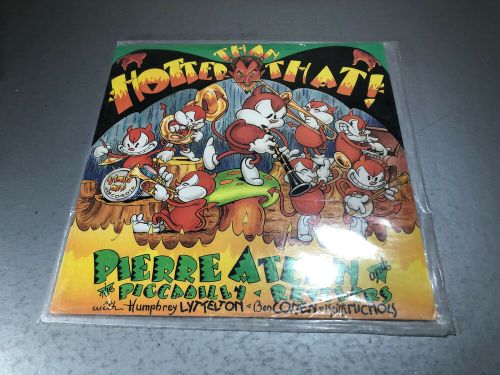 I contented myself with playing the record many times, then browsing through my shelves, where I found him appearing with Jean Francois Bonnel and Wally Fawkes, among other luminaries.  I looked in Tom Lord’s discography and found that Ben had recorded widely from 1950 to 2000, a very long time to be in one’s prime.

And there the matter would have remained, were it not for the gracious fellow who calls himself JazzVideoMike on YouTube — the link will lead you to his channel, where you will find yourself enchanted.  In real life, he answers to Mike Stevens.

I asked Mike to tell me something of his involvement with Ben, and Mike graciously wrote:

Ben Cohen played in Brian White’s Magna Jazz Band for many years right up to his passing. The Magna played weekly and from about 1990 I went weekly and got to know Ben. I started videoing jazz when I went to the French Quarter Festival in 1995 and bought my first camcorder on Canal Street. I then started going to the Bude and Keswick UK jazz festivals and making videos whenever possible, which I have continued right up to now.

I met Ben at these festivals and found that his style of playing with his Hot 5 & 7 was much more to my taste than his style with the Magna band. His early Louis style playing caused quite a stir, and admiration from many musicians. After 2000 Ben suffered several strokes, but he refused to stop playing and it was a more serious stroke which eventually brought him down.

Ben was a lovely man and greatly admired by many. [Sarah Spencer, below, says that Kenny Davern loved Ben.]  Brian White still says he was the best trumpeter he ever had in his bands. Ben and Alex Revell were the front line along with Chris Barber in his amateur band before Chris made it a full time professional band. Ben was an engineer with his own business and remained a part time musician throughout his career. Alex was a also a noted engineer and designer, and they played together again in Ben’s Hot 5 & 7. Jon Penn was the pianist, and Nick Ward the drummer, both now at Whitley Bay every year.

And here is Mike’s splendid video (let us praise the man behind the camera!) of a ninety-minute plus live session at the Bude Jazz Festival:

Now for a rare treat – a new Ben Cohen Hot Five Seven concert never before published – Launched in 1993, Ben’s Hot Five caused an immediate sensation at the Bude festival that year, since when they have starred at major festivals all over the country. 1994 saw the launch of an even more exciting Hot Seven. Ben Cohen, hailed by Humphrey Lyttleton as today’s finest trumpeter in the “early Louis” style, leads Alex Revell (clarinet), Mick Clift (trombone), Jon Penn (piano), Geoff Over (banjo), and they are joined in the Hot Seven by Terry McGarth (sousaphone), and Nick Ward (drums) with special guest Norman Field (reeds).

Ben Cohen is one of the legendary backroom boys of British Traditional Jazz. He first came to notice in Chris Barber’s amateur band in 1950. He based his style on that of early Louis Armstrong and over the years developed a reputation as a powerful lead player in any band he was in. He stuck religiously to playing the cornet rather than the trumpet and was only ever semi-professional throughout his career. Ben was a popular figure on the UK Jazz scene and for many years led his Armstrong inspired Hot 5.

The band is marvelous.  But I keep returning to Ben, who is — in the words of his friend and bandmate Sarah Spencer — “hot as heck.”

I am sorry that I never got to hear him in person, and — even more — tell him how much his music moves me.  But here is evidence of gorgeous nimble heat in the best Louis manner.  Thank you, Ben Cohen.

Posted in "Thanks A Million", Awful Sad, Bliss!, Generosities, Hotter Than That, Irreplaceable, It's All True, Jazz Titans, Jazz Worth Reading, Pay Attention!, Swing You Cats!, That Was Fun!, The Heroes Among Us, The Real Thing, The Things We Love, Wow!

Poor Blanche DuBois always depended on the kindness of strangers; in the jazz community, the kind strangers become friends in a few hours.

I lamented the loss of a set devoted to Jelly Roll Morton’s clarinet trios, and starring Matthias (clarinet), Keith (piano), and Nick (drums) until I noticed someone named “JazzVideoMike” had posted the whole thing on YouTube.  I emailed him, and he most generously gave permission to repost it here.

“JVM” turns out to be Michael Stevens, a recently retired chartered accountant (CPA over here) who has been devoted to hot jazz for a long time — about fifty years it appears.  Although he’s been to New Orleans, you’ll find him most often at the Keswick, Bude, Whitley Bay, and Upton jazz festivals. You can see more of the results by clicking JazzVideoMike

but here is the Morton set, all twenty-nine minutes plus of it: