“SPREADIN’ RHYTHM AROUND”: JONATHAN STOUT AND HIS CAMPUS FIVE 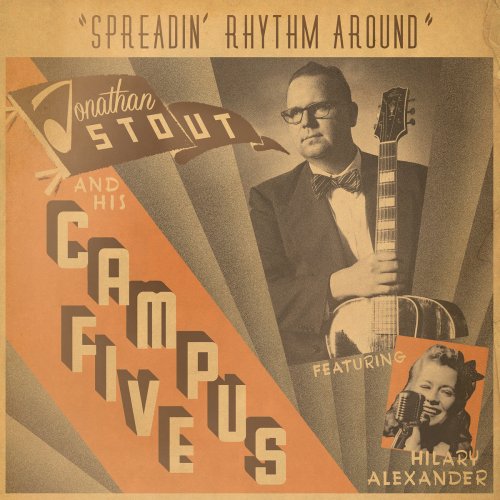 I did my own private Blindfold Test, and played a track from this new CD for a very severe jazz friend who prides himself on his love of authenticity, and he said, “Well, they’ve GOT IT!” which is how I feel about Jonathan Stout and his Campus Five.

Here’s a sample of how they sounded in 2016 at the Lindy Blossom Weekend:

The first piece of good news is that this group knows how to swing.  Perhaps “knows” is the wrong word, because I never believe that genuine swing feeling could be learned in a classroom.  They FEEL it, which is immediately apparent. Second, although some of the repertoire will be familiar, this isn’t a CD devoted to recreating the fabled discs in better fidelity; the group understands the great recorded artifacts but uses them as jumping-off places to stretch out, to offer their own creations.

I hear traces of the Goodman Trio on LIMEHOUSE BLUES, the 1937 Basie band on HONEYSUCKLE ROSE; Don Byas and Buck Clayton drop by here and there; as do Louis and Astaire; NAUGHTY SWEETIE owes some of its conception to Jimmie Noone, as SUNDAY does to Lester . . . but these versions are expressions of the blended personalities that make up a working band, and are thus precious for us in this century.

Jonathan’s two originals, MILL HOUSE STOMP and DANCE OF THE LINDY BLOSSOMS, work on their own as compositions with their own rhythmic energy. The former bridges the late Hampton Victors and 2 AM at Minton’s; the latter suggests EVENIN’, in mood more than chord changes. 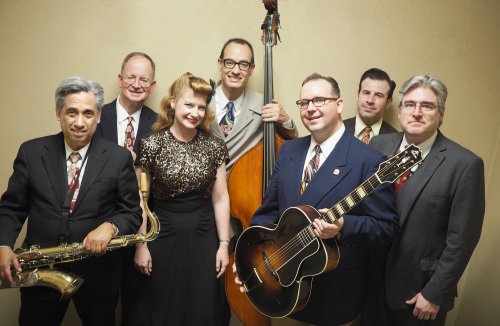 Those familiar with the “modern swing dance scene,” however you define it, will recognize the musicians as energized and reliable: the leader on guitar; Jim Ziegler, trumpet; Albert Alva, tenor saxophone and clarinet (both of the horn players bringing a variety of selves to the project — but often I thought of Emmett Berry and Illinois Jacquet, players I am grateful to hear evoked — and a rhythm team of Chris Dawson (yes!) piano; Wally Hersom, string bass; Josh Collazo, drums.  Jim takes the vocal on CHEEK TO CHEEK, sincerely but with a light heart, and several of the other songs are charmingly sung by Hilary Alexander, who has an engaging primness and delicacy while swinging along.  “Special guests” for a few numbers are the splendid Bryan Shaw, trumpet; Marquis W. Howell, string bass.

The individual soloists are a pleasure: everyone has the right feeling, but I’d just like to single out the leader, because his guitar work is so much the uplifting center of this band.  Stout has obviously studied his Charlie Christian but his solos in that context sound whole, rather than a series of patented-Charlie-phrases learned from transcriptions strung together for thirty-two bars.  His chord work (in the ensemble) evokes Reuss, McDonough, and VanEps in marvelous ways — glimpses of a near-vanished swing landscape in 2017.

And here they are in 2017, once again at the Lindy Blossom Weekend:

When I had heard the CD once again this morning, for purposes of writing this post with the evidence in my ears, I put it on for a second and third time, with no diminution of pleasure.  Later, I’ll play it in my car with the windows open, to osmotically spread joy as I drive.  Look for a man in a Toyota: he’ll be smiling and nodding rhythmically, although both hands on the wheel in approved position.  Rhythm, as they say, will be spread.  Around.

UNDECIDED — by Charlie Shavers — evokes a certain ambivalence.  “What do you want to call this tune, Charlie?” “UNDECIDED” comes back in a telegram — or so the story goes.  I remember Bobby Hackett, Vic Dickenson, Dave McKenna, Jack Lesberg, and Cliff Leeman playing it in such a manner that you knew there was no dithering at all.

Here’s a more current example: Jonathan Stout and the Campus Five, with guest Casey MacGill on guitar and scat vocal; Jim Ziegler on trumpet; Albert Alva on tenor saxophone; Chris Dawson on piano; Wally Hersom on string bass; Josh Collazo on drums; Jonathan himself on guitars.  It was recorded just a few days ago — January 4, 2013, at Rusty’s Rhythm Club – a weekly swing dance at an Elks Lodge in Playa del Rey, California.  Rusty’s also has live music on the first Fiday of the month: details here.

I like music that knows its own mind.  Even though the video is somewhat informal, it’s a gift to have it.  To see more of Jonathan’s bands, you need only visit here.

Posted in "Thanks A Million", Bliss!, Generosities, Hotter Than That, Pay Attention!, Swing You Cats!, That Was Fun!, The Heroes Among Us, The Real Thing, The Things We Love, Wow!

A friend sent me links to two YouTube videos I wouldn’t have otherwise found — posted by “swingscenevideos”: what they have in common is the presence of Jonathan Stout and that they both swing mightily in their own fashion.

Jonathan Stout leads a small hot group called the Campus Five — and he’s posted half-hour shows on YouTube, beautifully recorded and presented, on the “famouspictures” channel.  Here’s a more informal combo performing THERE’LL BE SOME CHANGES MADE led by Western Swing guitarist and singer Dave Stuckey — featuring Corey Gemme on cornet, Dan Barrett on valve trombone, Chris Dawson on piano, Wally Hersom on bass, and Jonathan on drums rather than his customary guitar.  (Fine drumming, there!)

While I’m asleep on the East Coast, these scenes are going on out West, which is very reassuring.