IT’S SAVORY! (THE SWING TREASURE CHEST OPENS FOR US.)

JAZZ LIVES, like its creator, is a little eccentric (I write those words with pride): I don’t always rush to cover what everyone else is covering.  But in the past few days, I’ve met several people, one a brilliant young musician, unaware of the riches made available by the National Jazz Museum in Harlem, the Bill Savory Collection in two volumes with more to come . . . so I write these lines as a Swing Public Service. 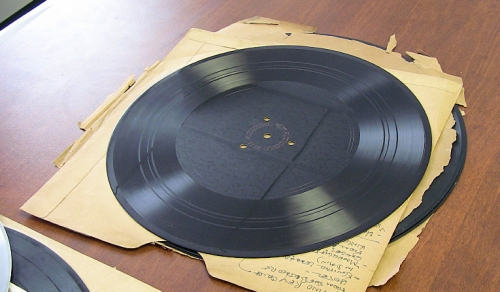 Here’s Loren Schoenberg, the guiding genius of all things Savory, on NPR, just a few days ago on November 6, 2016.

Let me backtrack a bit.  Some years back, the “Savory collection” was mythic and tantalizing.  Jazz fans had heard of Bill Savory, an audio engineer and Benny Goodman devotee, who had recorded hours of live material off the air in the late Thirties.  The evidence existed tangibly in a collection of BG airshots issued by Columbia Records to follow up on the incredible success of the 1938 Carnegie Hall Jazz Concert.  Some years back, the indefatigable Loren unearthed the collection.  I knew, step by painstaking step, of the heroic work that the peerless sound engineer and disc restorer Doug Pomeroy was doing in his Brooklyn studio.

Collectors were anxious to hear the Savory treasures: some made the trek uptown to the National Jazz Museum in Harlem to do auditory research. Excerpts were shared in news stories.  But we wondered about the legalities (dealing with the estates of the musicians) and the eventual price to us. Recently, we learned that at least part of the Savory material was to be issued digitally through iTunes.

Like many listeners of a certain age, I grew up with music being available tangibly.  I went to Sam Goody or King Karol and bought discs.  Others I borrowed and taped.  So the notion of, say, a Coleman Hawkins performance that I could hear only through my computer was mildly eerie.  But some of the downloaded music can be burned to homegrown CD — with a reasonably easy learning curve — and once downloaded, they won’t go away even if your computer suddenly starts to emit purple smoke.  If all of this is off-putting, one can buy a $25 iTunes gift card at the local supermarket or chain store; one can enlist someone under 30 to do the dance; one can hear treasures, most in gorgeous sound, never heard before.  And the price is more than reasonable: each of the two volumes costs less than a CD.

On the subject of money: as always, enterprises like this stand or fall on our willingness to join in.  I’m  not saying that anyone should starve the children, but this music is terribly inexpensive.  In speaking to some collectors, I found it wryly hilarious that more than one person said, “Oh, I only bought ____ tracks,” when I, being an elder, stifled my response that this was self-defeating.

In 1976, if you had said to me, “Michael, would you like to hear a jam session with Herschel Evans, Lionel Hampton, Dave Matthews, Charlie Shavers, Milt Hinton, Cozy Cole, and Howard Smith?  Give me six dollars,” I would have been removing bills from my wallet even though I was earning a pittance in academia.

I also note that some jazz fans have commented on Facebook that they are enthusiastic in theory but waiting to purchase the volume that will contain their favorite band.  If you don’t find something to admire here and now, I wonder about you.

Doug Pomeroy’s remastering of these precious discs is marvelous.  The immediacy of the sound is both intense and immense, especially for those of us used to “airshots” recorded by some amateur Angel of Hot with the microphone up to the speaker of the radio console . . . then playing the disc a hundred times. Savory had an actual recording studio and could record the radio signal directly. On a few tracks, there is some gentle static, I believe caused by a lightning storm, but it’s atmospheric rather than distracting.

Here’s a detailed essay on Savory and his collection.

Having learned how to navigate iTunes, I have been listening to the first volume for the last few days.  The second volume, sixty-two minutes of incredible live material in vibrant sound of the Count Basie Orchestra 1938-40 featuring Lester Young (also Herschel Evans, Buck Clayton, Jimmy Rushing) has proven too intense for me: I started to play the whole set and then found myself overcome, as if I’d tried to eat a whole chocolate cake in a sitting.  I can see that I will spread out this disc over a week or more of intermittent listening, and then more weeks to come.

A very literate San Francisco guitarist, Nick Rossi (you should know him!) has written, at my request, a short appreciation of a Herschel Evans solo from the first volume — to be published here shortly.

The first volume starts off with a triumph — a monumental performance, tossed off casually by Coleman Hawkins.  BODY AND SOUL, nearly six minutes (twice the length of the legendary Bluebird 78), followed by BASIN STREET BLUES, not something I’d associate with Hawkins, but it’s spectacular — also a leisurely performance.  Two Ella Fitzgerald performances remind us of how girlish she sounded at the start: irreplaceable and tenderly exuberant.  Next, a series of Fats Waller effusions live from the Yacht Club on Fifty-Second Street (now probably obliterated to make space for a chain pharmacy) where Fats is wonderfully ebullient, although the standouts for me are I HAVEN’T CHANGED A THING and YOU MUST HAVE BEEN A BEAUTIFUL BABY — the latter a new song at the time.  There’s a spirited reading of HEAT WAVE by Carl Kress and Dick McDonough (amazing as a team) and one of CHINA BOY by the Emilio Caceres Trio featuring Emilio on violin and brother Ernie on reeds.  And that jam session.

Jam sessions, when considered coolly decades later, tend to be lopsided affairs: someone rushes or drags, the tempo is too fast.  But this jam session offers us the poignant evidence of one of our great lost heroes, Herschel Evans, not long before his death.  He isn’t at full power, but he sounds entirely like himself — and the choruses here expand his recorded discography by a substantial amount.

The second volume offers what I noted above, but it bears repeating in boldface — sixty-two minutes of Lester Young and the Count Basie band in glorious sound — with more unfettered leisurely improvisation (how happy the band sounds to be playing for dancers and to have escaped the constraints of the recording studio).  I’ve only heard three tracks: a jam session on ROSETTA, a very fast I AIN’T GOT NOBODY with a Jimmy Rushing vocal, and one other.

Words fail me, and that is not my usual reaction.  I don’t think the rhythm section ever sounded so good, Freddie Green’s guitar so luminous.  My friends tell me that Lester is astonishing throughout (this I would not argue) but that there are also clarinet solos.  And in a complete loss of self-control, I found the superb full chorus for Vic Dickenson on I NEVER KNEW. Let joy be unconfined.

Here is the most expansive description of both sets, with sound samples.

I’ll stop now, because readers have already gotten the point or have stopped reading.  But please do visit the Savory Collection sites.  And I suggest that the perfect holiday gift for yourself is acquiring both volumes.  I don’t endorse a major corporation here, and I have been Apple-averse for as long as I can remember, but when the reward is Lester, Jimmy Rushing, Buck, Sweets, Jo Jones, Herschel, Hamp, Ella, Fats, Hawk, Vernon Brown, Milt, etc., I can conquer my innate distrust.  And so can you.