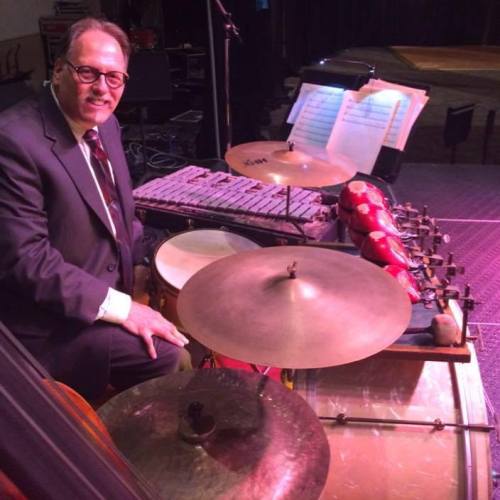 Hal Smith is someone whose music I’ve admired long before I was able to meet him and hear the magic he works from a front-row seat.  Dogs bark; cats meow; Hal swings, and I’ve never known him to fail.  Better than CPR.

Put it another way: I’ve had a driver’s license for decades, and am thus less comfortable in the passenger seat.  When I hear a performance with Hal at the drums, I can relax — the same way I do when Jo or Sidney or Wettling or Tough is in control: I know everything’s going to be all right.

A new CD with Hal is always a pleasure; the debut recording of a new Hal Smith band is an event, one to be celebrated.  SWING CENTRAL lives up to its title, and there’s more at work here than a) a quintet playing a swing repertoire and b) that the musicians all live in the Central time zone.

Those musicians — exuberant and focused at the same time are, besides Hal — Jonathan Doyle on clarinet; Dan Walton, piano; Jamey Cummins, guitar; Steve Pikal, string bass, and appearing on one track, Joshua Hoag, also on bass.

What makes this clarinet-plus rhythm group different and thus a treasure is vividly apparent from the first notes of the first track.  For one thing, SWING CENTRAL is aware that there is music not played by Benny Goodman.  Heresy to some, I know, and I treasure my Goodman records as much as anyone, but this band and this disc go another way. And that way is the endearingly individualistic way mapped out by Lester Young, Pee Wee Russell, Frank Chace, and Charlie Christian.  SWING CENTRAL is a hot band, but not an exhibitionistic one: on this CD or in performance, you won’t hear a ten-minute version of SEVEN COME ELEVEN that’s capped with a drum solo.  Hearing the disc again, I thought, “This band is playing for the music, not for the audience,” which is a beautiful and rare thing.  And the musicians know the records, but have absorbed them into their cell memory, so that they can play themselves, which is the only way to honor the innovators.  “Feelin’ the spirit,” as they used to say. 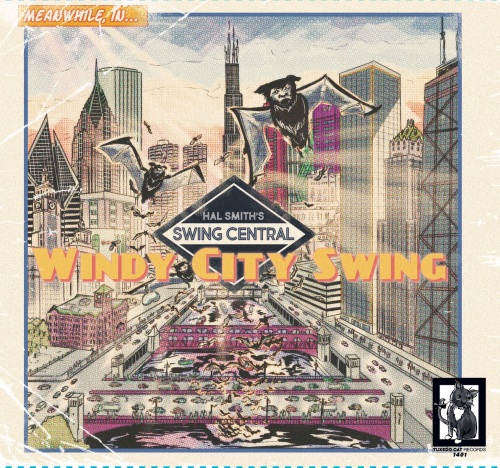 Now that you’ve gotten over the pleasant shock of the remarkable cover art by JP Ardee Navarro, hear and see the band in performance (Austin’s Central Market, 2016) for yourself:

Hal asked me if I would write something for this CD, and I was honored.  Here’s what I came up with: easy to tell the truth, and easy to express happiness in words.  (And in case what I’ve written seems to favor Jon Doyle and the leader, I will say only that I’d like to hear a CD led by Dan Walton, Jamey, or Steve.)

A MEETING OF KINDRED SOULS

A true story. Dizzy Gillespie and Thelonious Monk were in a taxi, discussing “the beat”. Monk favored surprising shifts but Dizzy disagreed. “What would you do if your heart beat irregular? The steady beat is the principle of life.” My cardiologist would agree: healthy, happy organisms swing from the inside out. Hal Smith’s Swing Central is not only a wondrous cohesive group, inspired by the music of Pee Wee Russell, Lester Young, Frank Chace, and friends, but it affirms joyous principles. From Austin, Texas, comes healing jazz.

Leader Hal tells how this band came to be:

I’ve known Jon Doyle since 2009. The first time I heard him warming up on clarinet, quoting Pres’ solo from “I Want A Little Girl,” the seed was planted for this band. Steve Pikal and I worked together in the Jim Cullum Jazz Band in 2010. Steve’s outgoing personality and propulsive bass playing is always a positive influence. Dan Walton introduced me to the Western Swing scene in Texas. We played together with Jason Roberts’ band and later with Dan’s own Jump Swing Imperials. He understands that “less is more” and it shows. Jamey Cummins has been in Austin for some time, and is finally receiving the attention he deserves. He plays wonderful Freddie Green-like time and inventive, highly rhythmic solos.

We decided not to pursue the familiar Goodman-based clarinet-and-rhythm repertoire but rather to explore the more introverted music of Pee Wee Russell, Lester Young, Frank Chace. Jon Doyle took to the idea like a bat takes to the Congress Ave. Bridge. When we began, the musicians lived in the Central Time zone, so the band name suggested itself. (However, we are not going to add “Pacific” when a couple of our musicians have relocated to the West Coast!)

This was the easiest recording session I have ever done, and several other band members agreed. I think you’ll hear what a good time we had.

This quietly thrilling band reminds me not only of the three inspiring clarinet playing individualists, but of the possibilities of music that gently breaks down the barriers some listeners and journalists build, cubicles labeled “schools” and “styles.” Swing Central takes familiar songs and make them fresh and dewy; Jon’s compositions and reinventions are witty beyond their titles. And these players – happy rovers in the land of Medium Tempo, great ensemble players as well as inspiring soloists — go for themselves rather than copying.

About the repertoire. Listeners will hear the chord structures of SUGAR, MY GAL SAL, I FOUND A NEW BABY, and LADY BE GOOD reinvigorated. An answer key is available at the end of your workbook, but no peeking until you’ve handed in your finished pages.

BIG AL evokes Mr. Capone, who would have tipped Swing Central generously to keep playing his favorite song. Hal explains BATS ON A BRIDGE as “a real Austin phenomenon, and five of the six musicians here have deep roots in Texas’ weirdest city. http://www.batcon.org/index.php/our-work/regions/usa-canada/protect-mega-populations/cab-intro. HI, FISHIES comes from a sweet cross-species story. Ask Jon when you meet him on a gig. REPEATER PENCIL is for Lester, and for this band: artists who honor the innovators by being innovative themselves.

LONG-DISTANCE MAN owes its title to a Pres-and-Chace story recalled by Larry Kart: “[Chace] also told a very ‘Frank’ story about his encounter with Lester Young in 1957 in Pres’s hotel room in (I think) Indianapolis, where Frank was playing at a club and Pres was in town with a non-JATP package tour. The drummer in the band Frank was part of, Buddy Smith, suggested that they pay Pres a visit after the gig, and when they got there, Frank (‘I’m shy,’ he said), hung back while the other guys gathered around Pres. Having noticed this bit of behavior, Pres beckoned Frank to come closer, addressing him softly as ‘long-distance man.’ Probably a meeting of kindred souls.”

SHEIK OF AIRBNB is named thus because Jamey stayed in an AirBnB directly below the studio where the session was recorded. I MUST HAVE THAT MAN is from the band’s live gig at Central Market in Austin on Aug. 28, 2016. Josh Hoag (now with Asleep at the Wheel) filled in for Steve. The band decided that they must share this track with us: a lovely gift. When you are enjoying SUNDAY, don’t be surprised when the track fades out. Do not adjust your set. Hal explains, “Alex Hall’s reliable recording equipment may have been affected by a sun spot, or maybe one of Doyle’s blue notes. But we liked the overall feel so much — particularly Jon’s playing — that we decided to keep as much as possible and fade before the sudden ending.”

Sir John Davies, a Renaissance poet, wrote ORCHESTRA, his conception of a cosmos vibrating in symphonic harmony. If we are very fortunate, the world might vibrate as does Hal Smith’s Swing Central – tender, relaxed, urgent. We have a long way to go, but it’s a noble aspiration.

Here is the link to hear samples, purchase an actual disc, or a download.  Hal and SWING CENTRAL will be appearing at the Bix Festival on the first weekend of August in Davenport, Iowa. . . so you can have the mutual pleasure of buying CDs from the band there, also.  And here is the place to find out about all things Smith — the swinging ones, of course.