I try to avoid hyperbole, but what I present here is twelve minutes of frankly incredible music — intense swing created by six masterful individualists.

The songs performed by the “All American Quintet [sic]” are JUST YOU, JUST ME, and I FOUND A NEW BABY — for a “Jubilee” broadcast in California, at the very beginning of 1945. “Jubilee” was a half-hour radio program aimed at an African-American audience, created and distributed on transcription discs by the Armed Forces Radio Service beginning in 1942.  Much more information, including an index to the programs until mid-1953, can be found here. 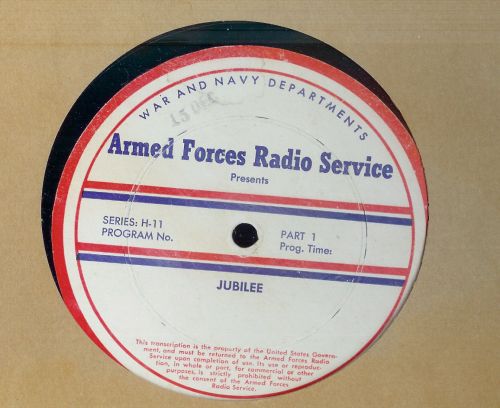 The musicians are Vic Dickenson, trombone; Willie Smith, alto saxophone; Eddie Heywood, piano; Les Paul, guitar; Oscar Pettiford, string bass; Sidney Catlett, drums. My copy of this music comes from a bootleg lp on the Jazum label purchased perhaps forty-five years ago.  The extended performances — longer than was possible on any commercial recording of the time — make for wonderful solos and a combination of intensity and ease.  The two songs were well-established vehicles for improvisation, JUST YOU, JUST ME, and I FOUND A NEW BABY.  Although the group technically had no leader — it’s a very egalitarian gathering — I’ve given Sidney Catlett pride of place for reasons you will hear, but everyone plays magnificently:

These performances are very dear to me.  I hope you find them equally thrilling.

Posted in "Thanks A Million", Bliss!, Generosities, Hotter Than That, Ideal Places, Irreplaceable, It's All True, Jazz Titans, Mmmmmmmmmmmmm!, Pay Attention!, SURPRISE!, Swing You Cats!, That Was Fun!, The Real Thing, The Things We Love, Wow!

Feeling lower than a snake’s belly?  Or perhaps is “fump” the objective correlative for now?  (Milt Hinton would be happy to explain.) Is the inside of your skull terribly dark these days?

This might help.  The elixir of life mixes the inspiring shades of Louis Armstrong and Hoagy Carmichael with the real-life inspirations offered us by Jon-Erik Kellso, Evan Arntzen, Rossano Sportiello, Frank Tate and someone holding a video camera — on December 22, 2016, at Luca’s Jazz Corner (1712 First Avenue, New York City).  There are no artistic or audible flaws in this video, but there are a few seconds where the focus blurs.  I wasn’t trying out new special effects, but the bright light from above confused the camera’s little brain.  However, blessedly, the sound is unaltered.  Hear for yourself:

Here is more evidence of the cosmic happiness that took place that night: RUNNIN’ WILD and FINE AND DANDY.  Incidentally, a young musician (I believe he plays trumpet) named Wynton Marsalis came in for the second set.  I am sure that he inspired the band, but I am even more sure that this delicious quartet inspired him as well.  As they did me.

Jon-Erik will be bringing a quartet back to Luca’s on March 23, 2017.  I plan and hope to be there.  You should come too.  (Other heroes — Gabrielle Stravelli, Michael Kanan, Pat O’Leary, and Ken Peplowski — have gigs coming up.)

You can experience the joy of Part One here.  All I will say is that I hope the MacArthur “genius grant” people are viewing this and the previous post: letters should be sent out now.  I won’t share their addresses, but the three superb creators of Melody and Swing are Tim Laughlin (clarinet), New Orleans; Kris Tokarski (piano), the same city; Hal Smith (drums), Searcy, Arkansas.

For the second part of the musical offering, here are two songs by Hoagy Carmichael.  The first has a glorious Louis Armstrong connection — both on disc and on film.  The second is a mournful poem in praise of the Crescent City, and the first recording of it I know features a young Jimmy Rushing with the Bennie Moten band.  Heroic antecedents, I would say.

and NEW ORLEANS, with the verse no one does:

And this just in.  My phone made a peculiar sound.  There was a text from a private number — a huge smiling emoticon with the initials H.C. beneath it. I take that as a celestial vote of confidence!

I don’t think I have to reiterate what a glorious time I had at the 2016 Evergreen Jazz Festival.  The music, as they say, speaks for itself.  And there’s more to come. 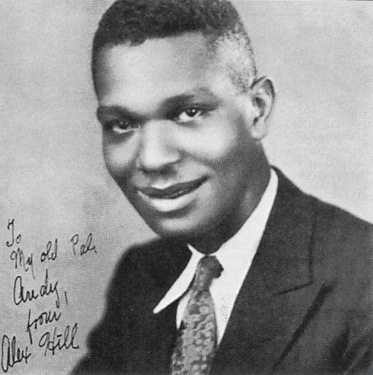 I don’t make resolutions, but if I did perhaps one of them would be to pay attention to the late Alex Hill (pianist, composer, arranger, singer, bandleader) who died of tuberculosis at 30.  What better place to begin than his early-Thirties romp — part invitation to a wingding, part sermon, part exultation with hopes to send the Depression flying out of the window — LET’S HAVE A JUBILEE? 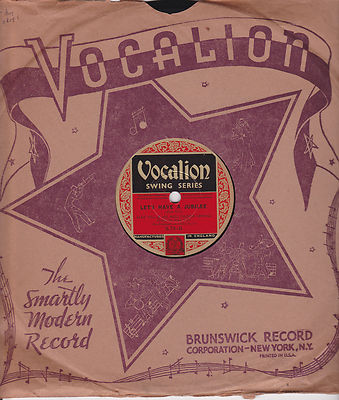 First, by the Mills Blue Rhythm Band, instrumentally, in what may be the first recorded version of the song:

Louis Prima and his New Orleans Gang, all satirically identified, in two takes: 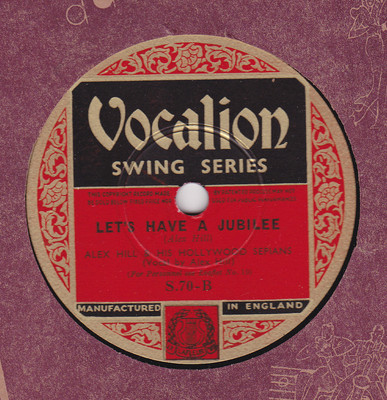 Alex himself “and his Hollywood Sepians”:

What a charming singer he was!  (I thought of the slightly cloudy voice of John W. Bubbles.)

And the Ellington version (the first recording of the tune I ever heard) with the glorious Ivie Anderson:

It’s unfair to Harry Roy to play his recording after Duke’s, but it represents the way a listener might have encountered the song as a new pop hit in early 1935:

Bringing us almost in to this century, here’s the delicious 1999 version by Hal Smith and his Rhythmakers featuring Rebecca Kilgore:

(I just saw that a 2012 CD by the wonderful hot band KUSTBANDET has this song as its title . . . must search out that disc.)

If you’re not even mildly jubilant at this point, there isn’t much more JAZZ LIVES can offer.  I hope it works!