WHAT DOES THE CAMERA SEE? LEE WILEY’S LOVE LIFE IN PHOTOGRAPHS

Rather, I present to you two public photographs just encountered on eBay — each one oddly evocative, both presenting and concealing.

The first finds Miss Wiley with the composer Victor Young — a publicity shot from the early Thirties (circa 1934-6) for Al Jolson’s radio program SHELL CHATEAU:

and the slip glued to the photograph’s back: 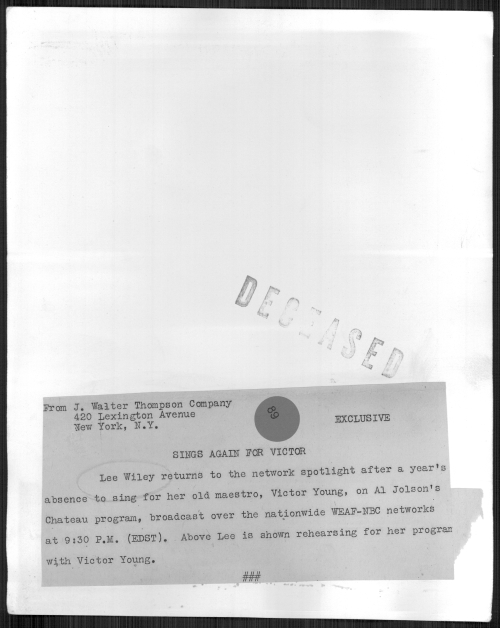 That photograph has an understandable stiffness: two musicians caught in the act of pretending to rehearse.  Everything is too neat: the “informal” clothing; the way that they are both looking at the camera while trying not to — not at each other.  I can hear the photographer: “Look like you’re singing, Lee.  Victor, don’t look down at the piano.  Look as if you’re accompanying her but don’t look at her.”

From this photograph, one wouldn’t know that Lee and Victor were “an item,” lovers for a long time.  There was a Mrs. Young, but the Wiley-Young affair was known among musicians.  The photograph of “Lee Wiley . . . and her old maestro” doesn’t even look as if they knew each other before this session. The truth of Lee and Victor — one of the possible truths — would not have been captured for the public eye.  Is it fitting that Lee and Victor made music together most frequently for records and radio broadcasts, where they would have been heard but never seen?

Slightly less than a decade later, another uncomfortable photograph freezes a present moment and accurately forecasts a less happy future:

Granted, wedding pictures do not always catch the moment in authentic ways, but the body language of this couple is less than ardent: their hands barely touch, their gazes are remote.  Even the text of the press release is more concerned with Lieut. Boettcher than with Jess Stacy, a great artist and a gentle man but hardly a “member of a wealthy Denver family.”  (Was this Charles Boettcher II, who had been kidnapped in 1933 and a $60,000 ransom paid?)

The back of the picture tells its own story.  The marriage did not last five years.

These photographs come from the files of J. Walter Thompson.  Years later, an administrative assistant went through the files with a rubber stamp, noting the DECEASED — a job with certain melancholy overtones.  (I think of Bartelby in the Dead-Letter Office.)  Someone on eBay will buy these as cheerful nostalgic artifacts.

CARELESS LOVE is from 1934 — Lee, with Victor directing.

And — since I can’t see it too often — here is Joe Rushton’s home movie of Lee and Jess, newly married, walking down the street.  Is it the same day as the press photograph? Lee has on a different outfit; Jess wears what seems to be the same double-breasted suit.  Consider what this shows of their marriage.

Does the camera capture only a moment of staged reality or does it show more than we know at the time?

Posted in "Thanks A Million", Awful Sad, It's A Mystery, It's All True, Swing You Cats!