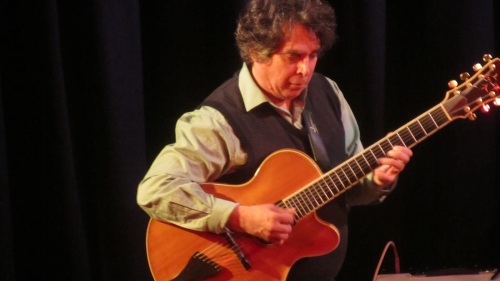 Even at 10:30 in the morning, the great artists create lovely subtle art — as did Howard Alden, guitar, and Joe Wilder, trumpet and flugelhorn.  This telepathic pair made beauty tangible at the Jazz at Chautauqua weekend in mid-September 2009, and I am delighted to be able to present two duets.

People who knew Joe well will also notice his uncharacteristically informal attire — one of the few times he was ever seen without a suit and tie — and I delight, on SAMBA, that he is using his green plastic cup (‘from the five and ten,” he told me) as a mute.

My videos are characteristically imperfect, even more so because I was not supposed to be shooting them: people pass by and pause, and I think my camera rises and falls with my breathing.  But I’d rather have these moments, preserved.

Howard has been incredibly gracious about allowing me to video-record him and then to post selected performances: if you search JAZZ LIVES posts, he is part of more than one hundred.  Joe appeared most recently in a 2009 session with Rossano Sportiello, Harry Allen, and Jon Burr, and the first part is here.  Bless them both.