Imagine, if you will, a friendly conversation between Bix Beiderbecke and Hugo Gernsback — rendered without a word, in lovely mysterious music — and you have some idea of what follows.

I don’t care to rank artists — let others create pyramids with The Hero(ine) at the apex — but it fascinates me that the collective grief at the death of Bix is so strong that generations of musicians have energized themselves in homages, exact or imaginative.  It is as if we cannot endure the fact of his death, so musicians invent contexts in which his glowing spirit can be summoned anew. It used to take the form of copying a Bix solo (SINGIN’ THE BLUES might be the most copied one I know) but that had its limits, so musicians began to imagine alternate universes.  What if Bix had played Gershwin?  What if we could know what CLOUDY sounded like?  And, most recently, how might Bix have sounded on songs of his time and place that he never recorded?

In 2015, the same players — with Michael McQuaid taking Mauro’s place — played another set: the delightful results below.  Andy provides commentary as needed.

Beautiful performances of songs that haven’t been overplayed, all in the idiom but expansively imagined.

The songs are Ol’ Man River; Milenberg Joys; Chloe; Mandy Make Up your Mind; Who’s It; Put ‘Em Down Blues; Whispering; Manhattan; Skid-Dat-De-Dat; Bessie Couldn’t Help It; Come On and Stomp, Stomp, Stomp; My Melancholy Baby; When She Came To Me; I’m Just Wild About Harry; The Baltimore.

A copy is winging its way to me through the mail. Details (of a digital sort) here.

Thank you, gentlemen — alive and dead. 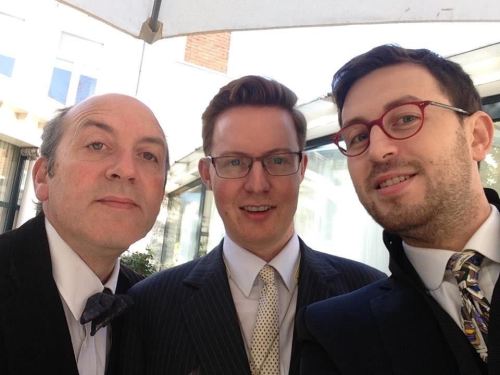 EVERY EVENING (with a vocal by Spats and a wonderful alto solo):

A rollicking LET ME CALL YOU SWEETHEART, with the rarely-heard verse and thrilling drumming from Nick Ward, as always:

A searing CHICAGO RHYTHM, a performance full of surprises:

I write this in January 2016 with temperatures properly wintry and a much-publicized blizzard announced: were I to play this music loudly through my open windows, it would turn bleak cold into balmy April: salutary global warming through expert heartfelt hot jazz.

“BIX OFF THE RECORD” and ON THE BANDSTAND

I confess I come late to this party — the delightful CD below was released almost five months ago — but I don’t arrive empty-handed.  The words tell it all.

And the music is joyful — more than the solemn faces on the cover suggest.

For whatever reasons — an elusive individual who thrills his contemporaries and vanishes, a creator of inexplicable delicate beauty — Bix Beiderbecke has been the subject of more inquiry, more debate, and more mythology than any other jazz musician.  I stand back from such diligence, although I admire its limitless energy.  What fascinates me is the music: the music Bix created and its reverberations after his death.

Many “Bix tributes,” to my ears, are laboring under burdens even before the first note is played or recorded.  Audiences sigh more fervently than they ever did for the young Sinatra when the first cornet notes of the SINGIN’ THE BLUES solo launch into the air.  Other bands offer exquisitely accurate copies of those OKehs and Gennetts.  Just the sort of thing for those who like that sort of thing.  “Perhaps if we can summon up GOOSE PIMPLES note for note, Bix will never have died?”

But BIX OFF THE RECORD is a more imaginative project.  It doesn’t seek to say, “What would Bix have played had he been on Fifty-Second Street alongside Hawkins in 1944,” or “Let’s score Bix for string orchestra.”  Rather, it imagines a lovely, plausible alternate universe where Bix, in the recording studios more often (although never enough) got to play and record songs he would have known, was known to have played, among his peers and contemporaries.

Enough words for the moment?  Hear sound samples here: three full tracks from the CD, ending with a touching cornet-piano duet on MEAN TO ME.  Aside from the brilliant (although honest) recorded sound, the first thing you will notice is the band.  No one is imitating Lennie Hayton, Bill Rank, or Min Leibrook.  The musicians — not tied to the original Bix oeuvre — are free to roam within the conventions of the genre, but not stiffly or formally.  And rather than having this session be a feature for the heartening cornet of Andy Schumm, it features everyone, with delightful arranging touches that make the result more than “Let’s blow on DINAH for five minutes, solos for everyone.” Each performance has sly, sweet, effective glances at other Bix recordings and recordings of the time.  It’s truly uplifting fun, not a class trip to the Museum of Jazz.  And you can’t read the very fine and informative liner notes by Julio Schwarz Andrade here, but they are worth the price of admission.

The Lake Records Facebook page is full of good things, including news of a new duo-release by Jeff Barnhart and Spats Langham called WE WISH THAT WE WERE TWINS, a title both enticing and philosophically deep.

But back to Bix — in his century and in ours simultaneously.

I said I came to this party with gifts, and here are two.  On November 7, 2014, eleven months ago, a sextet assembled on the bandstand of the Village Hotel Newcastle Inspiration Suite — where the glories of the 2014 Whitley Bay Classic Jazz Party took place — to play some of the songs that would be explored on the CD above.  Messrs Duffee, Sjostrom, Boeddinghaus, Porro, Kompen, and Schumm, if you need reminding.  I was there with one of several video cameras and (although there are heads intermittently in the way) the sound of the band was thrilling.  Here are two selections from that evening’s offering.

One, a pop song of the day much beloved by Bix (an improvisation on its chords and its intent became FOR NO REASON AT ALL IN C), I’D CLIMB THE HIGHEST MOUNTAIN:

Then, Morton’s WOLVERINE BLUES as if imagined by the Wolverine Orchestra:

These two performances are, I hope, inducements for those who can to hie themselves to the Mike Durham Classic Jazz Party — the Whitley Bay party appropriately renamed for its beloved, intent, humorous founder — which will start on Thursday night, November 5, 2015, with a concert / jam session by the exalted Union Rhythm Kings, and end somewhere between Sunday night and Monday morning, leaving us all weak with pleasure. Here is all you need to know to make that state of being yours. See you there in a month’s time!

And just because it is possible to do so . . . here is the brilliantly screwy surrealistic Fleischer Screen Song (1931) of I’D CLIMB THE HIGHEST MOUNTAIN — primitive karaoke through a distorting lens:

Posted in "Thanks A Million", Bliss!, Generosities, Hotter Than That, Ideal Places, Irreplaceable, It's A Mystery, It's All True, Jazz Titans, Pay Attention!, Swing You Cats!, That Was Fun!, The Heroes Among Us, The Real Thing, The Things We Love, Wow!

JANICE DAY IS OPTIMISTIC AND RIGHTLY SO

And in a few seconds more than three minutes — the length of a 78 — she makes us all feel more optimistic.  Janice can affect us in many ways, but at her core is a gentle winsomeness, which comes through so easily here.

“Why not grin?” indeed.  We have Janice Day and Her Gang to inspire us.  And this November, there will be another Party — celebrating a quarter-century of the best hot music, November 6-8, 2015.

First, two from the collaboration of the New Orleans Rhythm Kings and Jelly Roll Morton:

And from the Wolverines book —

SUSIE (she was from the Islands, if I recall.  Which ones?):

If you feel like visiting the real thing in its native element, I can’t urge you too much to investigate an actual pilgrimage to the Mike Durham Classic Jazz Party which will happen Nov. 6-8, 2015.  I know from past experience that tickets and seats are quickly getting snapped up.  And it’s never to early to make plans to get hot.

Before the band starts MILENBERG JOYS, Claus asks, gently, “Wonderful, isn’t it?”  I would change the question to an affirmation.

David Boeddinghaus is a superb pianist and arranger, but I’ve never had the pleasure of watching him time-travel back to the Twenties in ways exuberant and exact.  Here he is at the 2014 Whitley Bay Classic Jazz Party, with Andy Schumm, cornet; Kristoffer Kompen, trombone; Mauro Porro, Matthias Seuffert [only on SHE’S CRYING FOR ME], reeds; Spats Langham, banjo; Malcolm Sked, brass bass; Josh Duffee, drums.

SHE’S CRYING FOR ME:

FIREWORKS (harking back to the Original Memphis Five, not Louis and Earl):

WALKIN’ THE DOG (in honor of Carmichael’s Collegians):

What fine hot music they make.  And there’s more to come in November 2015 at

Posted in "Thanks A Million", Bliss!, Generosities, Hotter Than That, Ideal Places, Jazz Titans, Pay Attention!, Swing You Cats!, That Was Fun!, The Heroes Among Us, The Real Thing, The Things We Love, Wow! 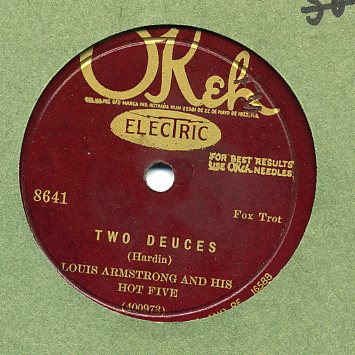 I thought, “What could I give the JAZZ LIVES audience for Christmas 2014?”

I am not in the habit of giving holiday presents, but I thought this would do the trick: a wonderfully sustained six-minute exploration of the 1928 classic TWO DEUCES (summoning up Louis Armstrong and Earl Hines in their youth) by some of Gabriel’s boys: Enrico Tomasso and Bent Persson, trumpets; Jean-Francois Bonnel, Mauro Porro (grinning), Claus Jacobi, reeds; Alistair Allan, trombone; David Boeddinghaus (brilliantly Hinesian), piano; Martin Wheatley, banjo / guitar; Henri Lemaire, string bass; Nick Ball, drums.  Recorded on November 9, 2014, at the Whitley Bay Classic Jazz Party:

This music embodies joy for all.  It won’t be stale on December 26.  And if you would allow me to send the Official JAZZ LIVES Holiday Message, it would be just six words and a few punctuation marks: