UP IN THE CLOUDS with BILL COLEMAN

No other trumpeter sounded quite like graceful Bill Coleman, who should have put his profession as “aerialist” on his passport.

It wasn’t a matter of playing high notes, for other trumpeters have gone higher, but the ease with which Coleman accomplished his arcs in the sky.  Most astonishingly, he made the whole thing sound so easy, which even non-trumpeters will know is a great feat of magic. And his sound!  Not brass and valves and air pressure and force, but “gold to airy thinness beat.” 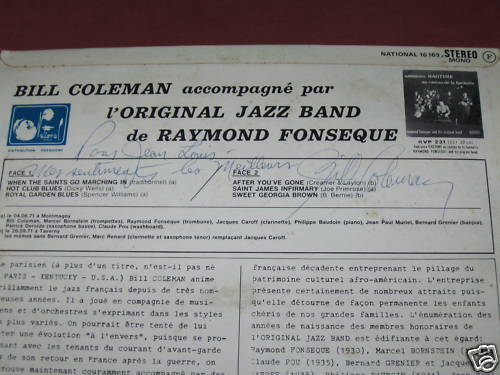 Postscripts: I realized, perhaps too late, that this blogpost was seriously indebted to that of my friend Michael McQuaid, hot musician from Australia, who had recently paid homage to Bill with THE OBJECT OF MY AFFECTION.  The evidence of the borrowing is here, but the theft was purely imitation as the sincerest form of flattery.  And — also from Oz — the trumpet player who most reminds me of Mr. Coleman is the equally dazzling Bob Barnard.

Posted in "Thanks A Million", Jazz Titans, Pay Attention!, Swing You Cats!, The Real Thing, The Things We Love