Any documentation of an artist’s work may be distant from the day-to-day reality of the work.  In the case of the noble trumpeter Bunny Berigan, many of his admirers understandably focus on those record sessions where he is most out in the open — aside from the Victor I CAN’T GET STARTED, the small-group recordings with Holiday, Norvo, Bailey, the Boswell Sisters, Bud Freeman, Fats Waller, and so on.  Some, rather like those who listen to Whiteman for Bix, delve into hot dance / swing band sides for Bunny’s solos: I know the delightful shock of hearing a Fred Rich side and finding a Berigan explosion when the side is nearly over.

But the Berigan chronology — on display in Michael Zirpolo’s superb book, MR. TRUMPET — as well as the discography shows that Bunny spent much of his life as a player and (too infrequently) a singer with large ensembles: studio groups, Whiteman, Hal Kemp, Goodman, Tommy Dorsey, before forming his own big band for the last six years of his very short life.

Ignoring Berigan’s big band records would be unthinkable, even for someone not choosing to hear everything.  Goodman’s KING PORTER STOMP and SOMETIMES I’M HAPPY, the Dorsey MARIE and SONG OF INDIA; Berigan’s own Victors.  Of course, like other bandleaders of the time, he was required to record a fairly substantial assortment of thin material.  Almost always, Berigan bravely transcends what the song-pluggers insisted he record.

Even the bands that came through well on records sounded better in live performance.  There is something chilly about a recording studio, especially when there are more than a dozen people trying to play arrangements flawlessly, that occasionally holds back the explorer’s courage. So if one wants to hear what a band was capable of, one must rely on recordings of radio broadcasts (and the much rarer on-location recordings from a dance date, such as the Ellington band at Fargo, North Dakota — itself a miracle).  Radio was consoling in its apparent evanescence; if you made a mistake, it was there and gone.  Who knew, fluffling a note nationwide, that someone with a disc cutter in Minneapolis was recording it for posterity?

Up to this point, there has been a small but solid collection of Berigan “live” material on vinyl — a good deal of it issued by Jerry Valburn and Bozy White in their prime.  I cannot offer my experience as comprehensive, but I recall listening to many of those recordings and enjoying their rocking intensity, but often waiting until Bunny took the solo.  But there were worlds of music I and others were unaware of. 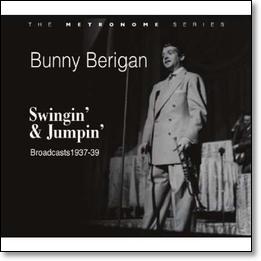 A new CD release on the Hep label, “BUNNY BERIGAN: SWINGIN’ AND JUMPIN'” is a delight all through.  It collects seventy-one minutes of material from 1937-39, nicely varied between well-played pop tunes and jazz classics. An extensive booklet with notes by the Berigan expert Michael Zirpolo (and some unusual photographs) completes the panorama.  Eleven of the nineteen selections have never been issued before, and there is a snippet of Bunny speaking.  The sound (under the wise guidance of Doug Pomeroy) is splendid.

Listening to this music is an especially revealing experience.  Stories of Berigan’s alcoholism are so much a part of his mythic chronicle that many listeners — from a distance — tend to think of him as helplessly drunk much of the time, falling into the orchestra pit, a musician made barely competent by his dependence on alcohol.

No one can deny that Berigan shortened his life by his illness . . . but the man we hear on these sides is not only a glorious soloist but a spectacular leader of the trumpet section and a wonderful bandleader.  The band itself is a real pleasure, with memorable playing from George Auld (in his energetic pre-Ben Webster phase — often sounding like a wild version of Charlie Barnet), George Wettling, Johnny Blowers, and Buddy Rich, Ray Conniff and others.

One could play excerpts from these recordings — skipping Berigan’s solos — and an astute listener to the music of the late Thirties would be impressed by the fine section work and good overall sound of the band.  The “girl singers” are also charming: no one has to apologize for Gail Reese, for one.

Did I say that Berigan’s trumpet playing is consistently spectacular?  If it needs to be said, let that be sufficient.  A number of times in these recordings, he takes such dazzling chances — and succeeds — that I found myself replaying performances in amazement.  Only Louis and Roy, I think, were possessed of such masterful daring.

And we are spared RINKA TINKA MAN in favor of much better material: MAHOGANY HALL STOMP, THEY ALL LAUGHED, BACK IN YOUR OWN BACKYARD, BIG JOHN SPECIAL, LOUISIANA, TREES, ROYAL GARDEN BLUES, SHANGHAI  SHUFFLE, HOW’D YOU LIKE TO LOVE ME?, and some hot originals.

This disc doesn’t simply add more than an hour of music to most people’s Berigan collection: it corrects and sharpens the picture many have of him. Even if you care little for mythic portraiture, you will find much to like here. It is available here.  To learn more about the wonderful story of how this music came to be in our hands and, even better, to hear an excerpt from ROYAL GARDEN BLUES, click here.

Posted in "Thanks A Million", Bliss!, Generosities, Hotter Than That, Jazz Titans, Pay Attention!, Swing You Cats!, That Was Fun!, The Heroes Among Us, The Real Thing, The Things We Love, Wow!

But if the evidence around me is to be taken seriously, many people are rushing around in search of the perfect last-minute holiday gifts.  I have a great deal of ambivalence about this, although I haven’t renounced materialism entirely.  The holiday season intensifies the loud drumbeat of the online entreaty BUY THIS NOW AND BE HAPPY!  Once you are past childhood, you sense that some purchases lead to nothing more than January remorse.  How many sweaters does anyone need, especially when we know that some people don’t have sufficient clothing to keep them warm?

But — even with all that in mind, I wish to quietly offer a few last-minute JAZZ LIVES  suggestions for gifts that won’t be tossed aside on December 27.

Tops on my list is a membership in support of the Louis Armstrong House Museum.  Here’s the link: LOUIS!  There are benefits and perks to becoming e member, supporting the best museum I know.  But even if you don’t have the minimum amount for membership, generosity is possible on a smaller scale.  If everyone who ever was moved by a Louis Armstrong recording or video sent the museum a dollar, it would make it possible for the LAHM to keep the legacy of Louis vivid and tangible in this century.

Perhaps you would like something for your contribution?  If you live close enough to Corona, Queens, New York, to pay the LAHM a visit, paradise awaits those who walk through the front door, in the gift shop.  Alas, the SATCHMO box sets have all been bought up, but there are racks and shelves of Louis-related gifts, from bags of rice with his picture on them, boxes of Swiss Kriss (something for Secret Santa at work, perhaps?), wonderful books by Ricky Riccardi, Michael Cogswell, and Jos Willems, DVDs and compact discs.

Did someone say “compact discs”?

The LAHM is the only place on the planet that has Gosta Hagglof’s lovely Ambassador series of discs — a wonderful labor of love, documenting Louis’ great work in the Thirties and Forties (and beyond) — with the Decca recordings, broadcasts, and more.  In fact, several of the Ambassador CDs contain music you can’t find anywhere else: the “Dancing Parties” one, devoted to Louis’ live recordings with Sidney Catlett, many of them from the Cotton Club, is extraordinary, as is the first volume of Louis and the All-Stars in Philadelphia 1948.  Unfortunately, the LAHM can’t ship you a boxful . . . you’ll just have to come to Corona in person, which is a life-changing experience.

So is Dr. Judith Schlesinger’s feisty and compelling THE INSANITY HOAX.  Check it out here

Dawn Lambeth is coming out with a new DVD (hooray for Dawn and Chris Dawson) and there is a DVD documentary devoted to Marty Grosz, RHYTHM IS HIS BUSINESS.  Details to follow!

Another possibility — giving thanks directly — is to go to a local jazz club.  Listen closely to the men and women swinging so deliciously.  Put something more than a dollar in the tip jar.  Buy a CD or DVD directly from the players.

And if all of this is beyond your capabilities, make sure you have jazz playing in your house . . . to lift your spirits, to make the rafters ring ‘way up to Heaven, and to enlighten your visitors.  If one more person gets to hear the 1938 Basie band, or George Wettling, or any jazz that makes you tingle, we are that much closer to creating and maintaining the wonderful world Louis sang about.