MANTLE or MARIS? and other PLAYGROUND ARGUMENTS 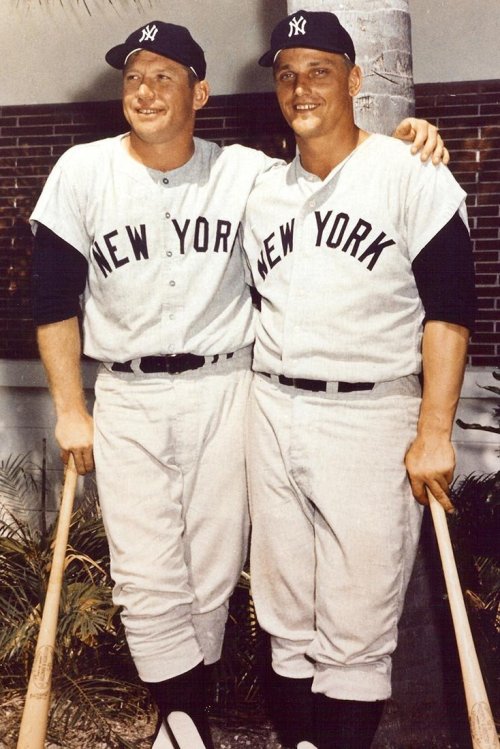 I have never been involved in sports as participant or spectator.  But when I was not yet ten, at recess, there were intense discussions, often arguments, among my male classmates about the merits of baseball stars Mickey Mantle or Roger Maris, competing to break Babe Ruth’s home run record.  I tried to join in, because I wanted to belong, and it would have been foolish to say, “Who cares?”  Looking back at least in this situation, we had statistical evidence: hits, runs, RBI’s and the like.  But this hierarchical squabbling struck me as silly then, and seems even sillier now when applied to art and creativity.

I should preface what follows by writing that jazz is a holy art to me, to quote Schubert.  And if what follows sounds irritable, you can say, “Michael’s gotten crabby in semi-quarantine, I see,” and I wouldn’t argue the point.  But the reason for this post is that it disturbs me when I see people who believe themselves experts and advocates about the music debasing it by their reactions.

A day or so ago I made the mistake of entering into a Facebook discussion on a wonderful page devoted to Lester Young, where someone with fine taste posted Lester’s 1942 version of BODY AND SOUL (Nat Cole and Red Callender).  The first response that caught my eye?  I quote, “Sorry, but coleman hawkins owns this song.”  Various people chimed in to proclaim the superiority of their favorite player, and I, rather than leaving the keyboard, wrote, “Art is not a competitive sport,” which also met with a variety of responses, which I won’t go into here.

On another page, someone posted that a revered drummer was the “GOAT,” or “Greatest of All Time,” not an omnivorous animal.  You can imagine the discussions that ensued, the rimshots and ride-cymbal crashes.

I found it odd that fans were so much more vehement about presumed superiority than most musicians were and are.

I don’t deny that some musicians were competitive by nature, wanting to show their powers, their mastery.  Some of the greatest lived to “battle,” among them Roy Eldridge, and “cutting contests” have a long history.  Norman Granz, knowing his audience, made these tests of strength and audience appeal the center of Jazz at the Philharmonic with “the drum battle” between Buddy Rich and Gene Krupa, or gladiatorial exercises between Illinois Jacquet and Flip Phillips, between Roy and Dizzy GIllespie.  However, when the concert was over, these musicians were friends who rode the band bus in harmony.  Artists with even a small amount of self-awareness respect each other, because they know how hard it is to play or to sing well, how it requires great skill and constant devotion to the art and the craft.

So these discussions of WHO’S THE BEST? are driven by audiences who want to see their team win.  They are also fueled by journalism and press-agentry.  Jazz has been weighed and measured by people who gave recordings and concerts stars and letter grades, in magazines that encouraged readers to vote for their favorites.  People would then buy the next issue to see how their votes counted.  All of this seems inexplicable now, that in 1956 a new record that we think a classic was given two stars in Down Beat when it appeared.  Or that X placed forty-seventh in the Critics’ Poll for that year.  Polls and year-end lists of the Ten Best CDs of the Year still go on, the latter energized by people of good character, but I think of them as marketing tools, not much else.  These competitions were good business for winners: if you won the poll, your price would increase.

We continue to live in a culture that greatly values the subjective opinion of the audience member(s).  I bought kitchen knives recently, and the company invited me to “submit my review.”  I was happy to, because the knives are exceedingly sharp.  But my review was a way of their getting free copywriting.  What I wrote might motivate someone to buy a knife, but it would have no effect on the knife’s quality.  It remains that way in art.  If you say that Tatum is your favorite pianist, does his work get any better: if you say he is too ornate, does he falter?  I am also reminded of someone who ran a jazz club, who told me that the way they knew if a band was good was the number of people in the room.  To me, the symphony means more than the volume of applause.

In print and in person, there were and are the jazz ideologues offering verdicts.  M “is the greatest jazz singer,” where P “is just a pop vocalist.”  C is “ground-breaking,” “harmonically adventurous,” “innovative,” “cutting-edge,” “genre-bending.” Reading this, I must assume that everyone else is sitting in the dirt, looking sadly at their dinner, a half-done potato covered with ash.

Art does not lend itself to the collection of evidence that baseball does.  If a singer has a larger range, is she a “better” artist?  If a drummer has a more dazzling technique, is he the King?  Is the superior musician the one who has more gigs, more fame, more money, more recognition?

I understand that there are artists who have been justifiably elevated to the pantheon (which, to me, is different than anyone’s “Hall of Fame”) but this also speaks to the Star System in Jazz, where there must be only one supernova in the galaxy.  For you, it’s Miles or Trane, for you Bird or Rollins, for you, Duke, for you, Louis.  The Star System is evident in what passes for “jazz criticism,” but perhaps most forcefully in Jazz Studies textbooks, where the Stars whiz by at blurry speed.  Louis-Roy-Dizzy-Miles.  James P.-Earl-Teddy-Tatum-Monk-Cecil.  And so on.  No room for Tony Fruscella or Buster Bailey because the publisher’s budget only allows for 650 pages and this price point.

Mind you, not only have I no objection to a rainbow of personal tastes, because I am a walking collection of them, and I revel in this.  If the music that makes you most happy is on an Impulse CD or a Dial 78 or an American Music one, who would I be to say that your feelings should be challenged?

But let us give up pretending that preference is empirical judgment.  Let us not treat individual reaction as law for everyone.  To write that someone is “the best,” or “better than,” is an attempt to say, “I like this.  Therefore it is good, because my judgment is always valid,” and then, “Why do you assert that something else that I do not champion is better?  Are you attacking my discernment?  I must defend my family’s honor!  Pistols at dawn!”

We are thus back at recess, a bunch of quarrelsome fourth-grade boys.  Art deserves reverence.  And the most reverent response may be rapt silence.

Posted in Awful Sad, It's A Mystery, It's All True, Jazz Worth Reading, The Things We Love