NAOMI AND HER HANDSOME DEVILS: “THE DEVILS’ MUSIC”

This is an irresistible CD.  The first time I put it in the player, after about a half-chorus, I leaned forward and raised the volume.  When I had heard Naomi sing ISN’T IT ROMANTIC? for the first time, I played it again.  And then again.  And several times over.  And (I know this might seem monotonous) I played the disc again from the start.  That should serve as the JAZZ LIVES Seal of Approval, shouldn’t it?  (Note: the apostrophe in the title is also a hilarious gift to us.) 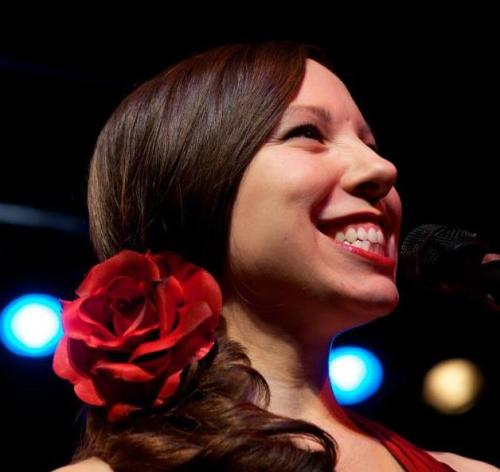 If you visit YouTube and type in “Naomi Uyama,” you will find many videos showing her as a championship swing dancer.  But I first encountered Naomi as a singer, and a fine one — singing a chorus from a Boswell Sisters recording alongside Tamar Korn and Mimi Terris — on a cold night in 2009 outside Banjo Jim’s.  Naomi and her expert friends resurfaced with their first CD, which I reviewed here with great pleasure in August 2014.

Here are several tracks from that CD — to show you that Naomi and her Devils know and knew how to do it.  Lil Johnson’s TAKE IT EASY, GREASY:

Something more polite, the Basie GEORGIANNA:

I know I’m getting carried away here — a wonderfully sweet / swinging performance of IF I COULD BE WITH YOU:

Naomi and the Devils write, “Our hope was to show the growth we’ve had as a unit since our debut album was released 2 years prior. Our focus: having original arrangements of swinging tunes – some well loved by the dance community and other hidden gems. We also added to our line-up, and over half the songs on this album feature Mike Davis on trumpet, expanding our hot horn harmonies and giving us a new sound. Lastly Naomi wrote the band’s first original composition, track 1 “Little Girl Blues,” putting something out there that you can’t hear from any other swing band. With a vintage ear and expertise from recording engineer Alex Hall we’ve mixed and mastered the whole shebang and can’t wait for the world to hear it. We hope you enjoy “The Devils’ Music”.

Now, some comments from me.  Naomi, as I hope you’ve already heard, is not just someone who sings: she is a singer, with a voice that’s attractive in itself, which she uses to great effect, depending on the material.  She can handle complicated lyrics at a fast tempo; she swings; she has a sure sense of dynamics. She doesn’t copy old records; she doesn’t overdramatize; she understands the songs; she can be rueful, tender, brassy, and she’s always lively.  Her phrasing is playful, and she’s no swing robot — by which I mean she’s loose, not repeating a set of gestures.  And a witty lyricist on LITTLE GIRL BLUES.

I also think that it is so much harder to sing ISN’T IT ROMANTIC than a swing number, and on this delicate love song Naomi captivates me.  The same for IF WE NEVER MEET AGAIN, even when Gerlach’s lyrics defy logic.  Her I’M LIVIN’ IN A GREAT BIG WAY made my living room rock, and I nearly hurt my neck bobbing my head to SHOO SHOO BABY.  Having heard Louis, Bing, and Billie make imperishable versions of PENNIES FROM HEAVEN, I’ve come to dread contemporary versions, but hers is special, with a hilarious scat break.

That band!  I’ve met and admired six of the players in person (to me, their names are an assurance of swing).  I bow to them.  I’ve not met Jeremy Noller, but he is another Worthy — a rocking Worthy at that. Catch his tom-tom work on ROSE OF THE RIO GRANDE.  And although the Devils sit so comfortably in a Basie / Lunceford / small-group Ellington groove, there’s a delicious c. 1929 A GOOD MAN IS HARD TO FIND, completely convincing.  (The band likes to riff, with about half of the tracks arranged by Naomi or Jake: nice uncluttered charts, expertly rehearsed but never stiff.)  Naomi lays out on PERDIDO (a good thing, considering the thin lyrics), BLUES WITH A BEAT (a Forties-sounding romp), DELTA BOUND (a pleasure at any tempo), and a grooving THESE FOOLISH THINGS.

This is a long expression of praise, but you will notice I haven’t listed all the delightful moments on the CD; were I to do so, the post would be three times longer.

You can download the CD here ($13) or see how to buy a physical disc on the same page . . . AND . . . you can hear all the tracks on the disc.  “If that don’t get it, well,  forget it right now,” to quote Jack Teagarden, more or less, on the 1947 SAY IT SIMPLE.  For more first-hand information, here is the band’s Facebook page, and here is Naomi’s page.

It’s all quite devilishly wonderful.

NAOMI AND HER HANDSOME DEVILS

I first met Naomi Uyama in a downtown New York music club five years ago. Soon, we adjourned to the sidewalk.

It’s less melodramatic or noir than it appears.  The club was Banjo Jim’s — ‘way down yonder on Avenue C — where a variety of jazz-folk-dance groups appeared in 2009. The most famous was the Cangelosi Cards, in their original manifestation, featuring among others Tamar Korn, Jake Sanders, Marcus Milius, Cassidy Holden, Gordon Webster, Kevin Dorn. Tamar, who has always admired the Boswell Sisters, got together with singers Naomi and Mimi Terris to perform some Boswell numbers as “The Three Diamonds.” On one cold night, the three singers joined forces on the sidewalk to serenade myself, Jim and Grace Balantic, and unaware passers-by with a Boswell hot chorus of EVERYBODY LOVES MY BABY. Tamar has recorded on her own, as has Mimi, but I and others have been waiting for Naomi to record, to share her sweet swing with the world. And the disc is delightful.

The first thing one notices about the disc is its authentic swing feel courtesy of players who have a deep affection for a late-Basie rhythmic surge and melodic ingenuity: Jake Sanders, guitar; Dalton Ridenhour, piano; Jared Engel, string bass; Jeremy Noller, drums, and a two-person frontline of Adrian Cunningham, tenor saxophone and clarinet; Matt Musselman, trombone.  The band is neither over-rehearsed or overly casual; they provoke regular movements of the listener’s head, torso, and limbs.  (I can attest to this.)  They aren’t busily copying the sound of classic recordings; they are swinging out in fine style. I heard echoes of Illinois Jacquet and Al Grey, of a Buddy Tate band uptown or a Forties Jay McShann small group, of Tiny Grimes and Sir Charles Thompson — those players who swung as reliably as breathing. The band never gets in Naomi’s way, and they make happy music for dancers, riffing as if to the manner born.

But this might seem to ignore Naomi, which would be unthinkable. She came to jazz through lindy hop, which means her rhythm has a cheerful bounce to it, even on slower numbers. But she knows well that making music is more than beating a solid 4/4 so that the dancers know where one is. Naomi is an effective melodist, not tied to the paper but eminently respectful of the melodies we know. Her improvisations tend to be subtle, but when she breaks loose (trading scat phrases with the horns on MARIE) she never puts a foot wrong. (MARIE, incidentally, is the fastest track on the disc — 223 beats per minute — and it never seems rushed. I approve that Naomi and her Handsome Devils understand the beautiful shadings possible within medium-tempo rocking music.)

Naomi’s voice is a pleasure in itself — no rough edges, with a wide palette of timbres, but perfectly focused and with an effective phrase-ending vibrato. She doesn’t sound like someone who has spent her life memorizing Ella, Billie, or a dozen others; she sounds, rather, like someone who has fallen in love with the repertoire and decided to sing it, as if she were a bird bursting into song. In swingtime, of course. On Lil Johnson’s seductive encouragement, TAKE IT EASY, GREASY, she does her own version of a Mae West meow, but she doesn’t go in for effects and tricks. Her phrases fall in the right places, and she sounds natural — not always the case among musicians offering milkless milk and silkless silk in the name of Swing.

And I had a small epiphany while listening to this CD. A front-line of trombone and reed (mostly tenor) is hardly unusual, and it became even less so from the middle Forties onwards, but it makes complete aesthetic sense here, because the spare instrumentation (two horns, powerful yet light rhythm section) gives Naomi the room she needs to be the graceful and memorable trumpet player of this little band. Think, perhaps, of Buck Clayton: sweet, inventive, bluesy, creating wonderful phrases on the simplest material, and the place Naomi has made for herself in the band seems clear and inevitable.

The songs also suggest a wider knowledge of the Swing repertoire than is usual: Basie is represented not with a Joe Williams blues, but with the 1938 GLORIANNA, and the Dorsey MARIE is an evocation rather than a small-band copy. There are blues — I KNOW HOW TO DO IT and the aforementioned TAKE IT EASY, GREASY — as well as classic pop standards that feel fresh: I CAN’T GIVE YOU ANYTHING BUT LOVE, ONE HOUR, LOVER, COME BACK TO ME, AFTER I SAY I’M SORRY, GOODY GOODY, IS YOU IS OR IS YOU AIN’T MY BABY, WHAM, and THIS CAN’T BE LOVE.

The disc offers nothing but good music, never ironic or post-modern, neither copying nor satirizing, just beautifully crafted melodic Swing.  Welcome, Naomi — with your Handsome Devils alongside. On with the dance!

Now, some bits of information. You can find Naomi on Facebook here; the band has its own page here. To buy the disc (or a download), visit here, where you also can hear samples of the songs. To hear complete songs, visit here. Naomi and a version of her Devils can be found on YouTube, and here is her channel. Enough data for anyone: listen to the music and you’ll be convinced.

Posted in "Thanks A Million", Bliss!, Generosities, Pay Attention!, Swing You Cats!, That Was Fun!, The Heroes Among Us, The Real Thing, The Things We Love