THE RUBAIYAT OF MARTY GROSZ

Tidying one’s apartment has unforeseen benefits.  Not only can one find things that should be disposed of, but objects forgotten or unknown bob to the surface. Domestic archaeology.

This little piece of paper has been on my kitchen counter for some time now: who would throw out a scrap of paper handwritten (a holograph manuscript) from the Most Revered Martin Oliver Grosz?

With the help of the experts at the British Museum and the Berg Collection at the New York Public Library, who offered their best carbon-dating and electron-microscope expertise, their deep analysis of paper fibers and ink, we have an approximate date of early 2011.  I could have told them that . . . but experts must be allowed to play.

Marty and Co. (including Jon-Erik Kellso, Dan Block, Scott Robinson, James Dapogny, Vince Giordano, Arnie Kinsella, and “Panic Slim”) had recorded a CD called THE JAMES P. JOHNSON SONGBOOK (Arbors).  I had been allowed to attend the recording sessions in Union City, New Jersey — on October 27, 28, 29, 2010. Here’s a link to find out more. Some months later, when the finished CD was ready but not yet released to the eager public, Marty sent me a copy and enclosed this gnomic utterance:

In the presence of such wisdom, any commentary would be profane.

In the illustration below, Omar Khayyam is being serenaded by Saki.  Historians are uncertain whether she is using the Carl Kress tuning. Research! 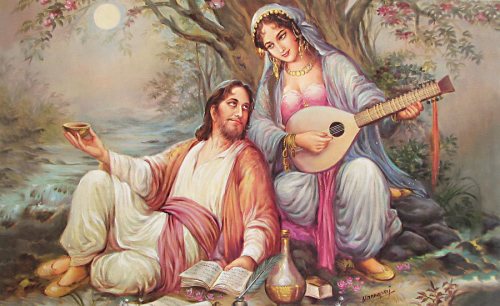 Posted in "Thanks A Million", Irreplaceable, It's A Mystery, It's All True, Jazz Worth Reading, Pay Attention!, Swing You Cats!, That Was Fun!, The Heroes Among Us, The Real Thing, The Things We Love

Thanks to Bob Erwig for posting this clip of the Ruby Braff-George Barnes Quartet, perhaps in Berlin in 1974.  The other heroes here are the Wayne Wright and Michael Moore — singing their way through Ellington’s “Solitude” as if it were a hymn and they were divinely inspired.  I remember seeing this quartet accomplish artistic miracles in Bryant Park, outside the New York Public Library on 42nd Street.  To say their performance was unforgettable is simple accuracy.

Posted in "Thanks A Million", Irreplaceable, Jazz Titans, The Real Thing, The Things We Love