What does that lovely calligraphic logo have to do with jazz or JAZZ LIVES?

Easy.  Let’s start with someone I admire, the fine musician Emily Asher. If you’ve been paying attention to the scene for the last ten years, you’ve heard and seen Emily — an inventive trombonist, a winning singer, a delightful composer, arranger, and leader of fine appealing ensembles — on her own, with her Garden Party, her Endangered Species Trio, with Wycliffe Gordon, with Shannon  Barnett, as a charter member of Mighty Aphrodite, around New York and the Pacific Northwest . . . wherever good music can be found.  I’ve featured her on this blog (visit the handy search bar when you have an hour or so).

But Emily is more than a fine, consistently inspiring musician.  Early in her career, she was leading groups — sometimes an unrewarding experience — and from that, she learned a great deal . . . practical knowledge about how to survive in that thing called “the music business,” where dealing with clubowners, getting gigs, maintaining good relations with other musicians, being paid fairly — all the things that audiences don’t see when the band takes the stage.  Emily has a big heart as well as a big range, so rather than jealously keep her wisdom to herself, she founded the Nobilis Music Group with the idea of helping other musicians and groups avoid pitfalls and — dare we say it — happily make a living.

She was not content to print up business cards, rent office space, and sit at a desk behind a sign reading Sole Proprietor. That’s not her style.  (Emily runs marathons.)

Last month, on April 2, Nobilis held its first evening — six bands showed what they could do (and more) to an intent and amazed audience. Here is the YouTube playlist of the musicians who performed that night.  Although some might call Emily’s usual music a cross between Old Time Modern and New Lyrical (she writes and sings songs that are reminiscent of her idol Hoagy Carmichael) the range of music under the Nobilis banner is astonishing, from 1926 Hot to twenty-first century Modern to surrealistic rock-opera.  All of it genuine, original, lively. 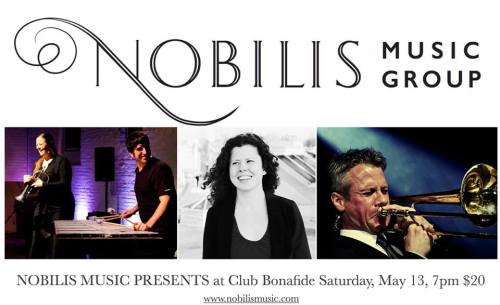 The second Nobilis evening (as depicted above) will feature Marshall Gilkes, Eric Doob, and Matt Clohesy; Michele Zayla; Nadje Noorhuis and James Shipp. All of this will happen on Friday, May 13, from 7-11 PM.  (Twenty dollars for four hours of music is a deep bargain, as jazz listeners know.)  This energized creativity will take place at Club Bonafide, 212 E 52nd Street, Third Floor, New York, New York 10022.  And you can learn more here.

Here is the Facebook event page, and here is the link to purchase tickets (inexpensive ones for a night of music) online.

I urge you to drop by (Club Bonafide is very inviting — cozy, too — not for the usual platitudes.  “For the good of the music.”  “To keep live jazz alive.”  “To support a worthy venture.”  Those are all true, but I know, from the first Nobilis evening, that you won’t yawn, scowl, feel bored, or feel the need to check your phone.  Rare experiences in this time and place.  The press release describes the three bands as “sonically luscious.”  If that isn’t an inducement to show up, look at yourself closely in the mirror next time you pass by and ask, “Who is that person?”

Posted in "Thanks A Million", Bliss!, Generosities, It's All True, Pay Attention!, Swing You Cats!, That Was Fun!, The Heroes Among Us, The Real Thing, The Things We Love, Wow!