My posting of Stompy Jones’s memories of watching Eddie Condon’s Floor Show have resulted in some wonderful responses.  One reader of this blog, who didn’t want to be identified, offered the possibly-apocryphal story that has, he said, been circulating for years about the disappearance of the Floor Show kinescopes.  I hope that this lurid tale of criminal behavior  isn’t true and that someone like Mark Cantor stumbles upon a pile of film cans by surprise.  And then someone can find the discs of the Whiteman Old Gold radio programs.

Jim Lowe of the UK reminded me that I had left out Billie Holiday as a charter member of the Show’s cast, as indeed I had.  I also neglected to mention one of the high points — Louis Armstrong reading “The Three Bears,” a unique experience.

Rob Rothberg, whose collection of jazz-related still photographs is a marvel, sent these two along.  I assume (from the quality of their paper) that they come from newspapers of the time or perhaps Variety?

Whoever the singer is, and her identity eludes me, she surely isn’t Lee Wiley.  Was that woman even a singer, or was she a pretty secretary, added to the shot?  The people I do recognize are Roy Eldridge and a black-shirted Bobby Hackett, Peanuts Hucko, Condon himself, perhaps Jack Lesberg on bass (in sunglasses to protect himself from the bright studio lights?) and Cutty Cutshall on trombone.  An audio-only “Rose Room” from 1948 pairs Eldridge and Hackett, so perhaps this shot comes from that year. 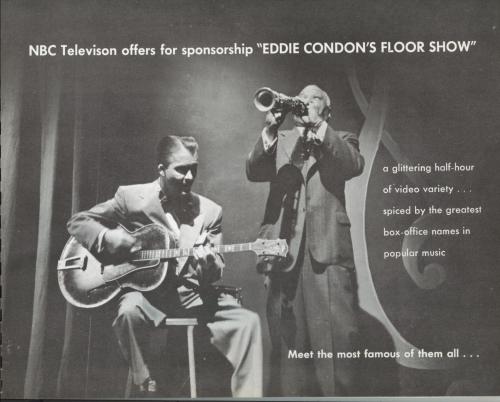 Apparently NBC thought that a photograph of Condon and Sidney Bechet, two of the “greatest names in pop music,” might attract Proctor and Gamble or Coca-Cola.  As I recall, the big companies weren’t terribly interested.  Or was it that Condon wanted to play music rather than selling detergent?

Other photographs taken on the set can be found in EDDIE CONDON’S SCRAPBOOK OF JAZZ — Hank O’Neal’s delicious trip through Condon’s photographs, letters, and memorabilia — with Eddie’s hilariously incisive comments.  There’s a tiny shot in that book of perhaps the world’s best jazz trio: Lips Page, James P. Johnson, and Zutty Singleton, the three men all looking foreshortened by the camera angle, even though we know they were giants, like Condon himself.

Posted in "Thanks A Million", It's A Mystery, Pay Attention!, The Things We Love