Yesterday the Beloved and I visited what we call “Mrs. Rodgers’ Book Barn,” although its official name is “Rodgers Book Barn” — a fine old-fashioned used bookstore (467 Rodman Road, Hillsadle, New York, 518-325-3610).  Mrs. Rodgers herself is a pleasure to talk to and deal with.  The Beloved ended up with four or five new gardening books . . . but her clever eye had spotted a stack of sheet music, and Mrs. Rodgers, seeing me clutch my purchases ardently, told me that more awited in the barn.

Aside from the one late-Thirties ringer (which you will spot easily) this is a hot collection circa 1931, with photos of musicians and bandleaders I had not seen before.  The original owner or owners had an ear for lively pop music.

I had never seen the music for this song before and was dismayed to find it has a truly uninspired verse, but any song made immortal by Benny Carter, Coleman Hawkins, and Django Reinhardt in 1937 and later by Dick Sudhalter and Marty Grosz is worth celebrating.

Signs of the times — the reverse of one of the music sheets (which, in other cases, show the industry at a crossroads, with ads for music, phonograph records, and piano rolls — anything to keep people from sitting in front of their radios and listening for free).

In her sweet little Alice Blue gown — a pretty waltz before the jazz players got to it!

I never heard of Walter Doyle, but was captivated by this because of the hot recording by Rube Bloom and his Bayou Boys in 1930 — and a hot performance of the song done by Spats Langham at, you guessed it, Whitley Bay.  It’s one of those period songs that threatens to terrify the listener.  Is it the Ur-text for OL’ MAN MOSE, I wonder? 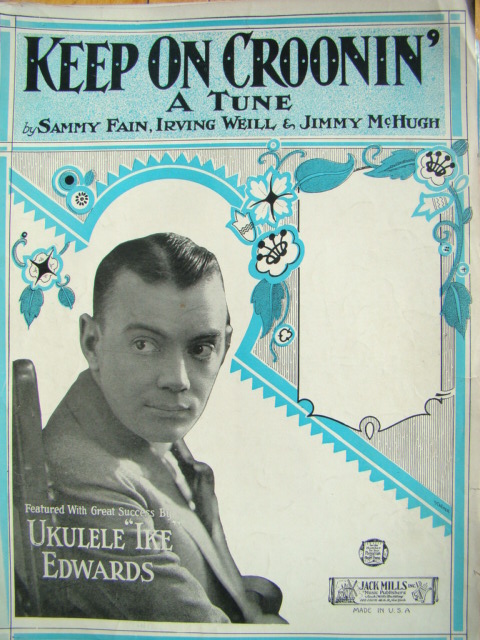 One of my heroes, looking skeptically off into the distance.  (I gather there’s never been a biography written of Cliff Edwards?)

Nice publicity still of Bing — although I have never heard him sing this song.

Then again, I never heard Gene Krupa sing this one, either. 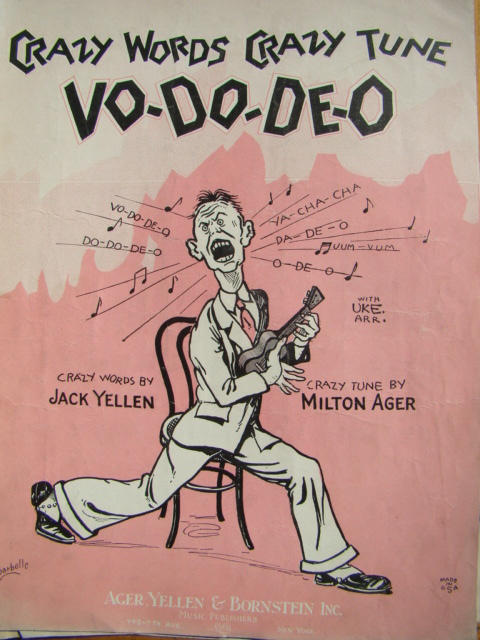 A lively cover for a hot Twenties tune — again, in my memory because of Spats Langham’s performance.

I bought this one for the cherubic Whiteman portrait.  All of the sheet music I’ve encountered here and on other vacations tends to wander far from its original source (some sheets were originally purchased in Missouri, one in a Maine music store that billed itself TEMPLE OF MUSIC) but this song must have been well-loved here or elsewhere, if the number of copies unearthed here is any indication.  “Why Wyoming?” I ask myself, with no particular hopes of an insightful answer. 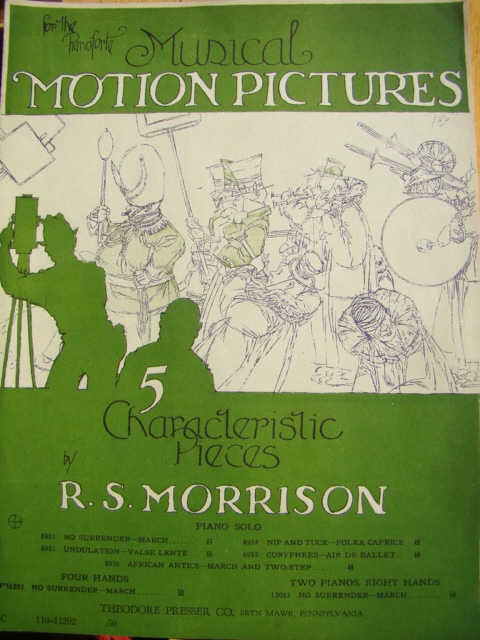 This is a real oddity — a 1913 folio of original compositions.  At first, I thought it was music for those pianists who improvised to fit what they saw onscreen (the big love scene, the terrible storm) but now I think it’s something even more subversive: music implicitly connected with those pictures and perhaps the fantasy of being the pianist in the pit . . . to make Junior put down his bat and ball and practice that piano.

Only diehard jazz fanciers will understand why I got terribly excited about the last two sheets, below: 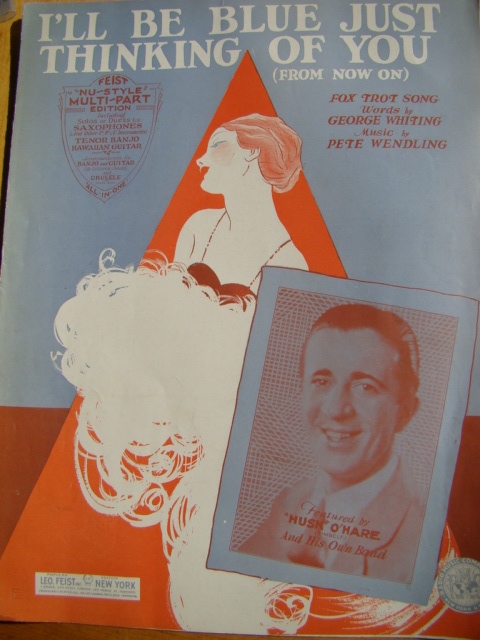 I know that that portrait finds Husk O’Hare perhaps a little past his fame as a bandleader in whose organization hot players could find work, but I’d never seen a picture of him.

I knew Pollack was famous, and that this 1929 engagement brought him fame, but I never expected to see him on the cover of this sheet music.  Of course, in an ideal world, Jack Teagarden’s picture would replace Pollack’s, but you can’t have everything.

And (speaking of crass commerce) these pieces of irreplaceable jazz ephemera cost less than an entree at the local Mexican restaurant, so I am in the unusual position of being rich in possessions and positively thrifty at the same time — thanks to the unknown Benefactors and gracious Mrs. Rodgers.

Posted in Irreplaceable, Jazz Titans, Jazz Worth Reading, Pay Attention!, Swing You Cats!, The Real Thing, The Things We Love

BIX, BING, and FRIENDS IN THE BERKSHIRES

The Beloved and I are fond of a certain kind of antique store — not too expensive, devoted to fine French furniture costing thousands, and not specializing in rusted tools and old newspapers.  She is currently entranced by certain kinds of McCoy pottery (planters, not the terrifying cookie jars); I, predictably, look for sheet music and old records.  I might gaze longingly at a Victrola but have no intention of making a commitment to one.

Sheet music is often in terrible shape if it’s been stored in the barn, and if it’s been well-cared for, the prices rise.  Today we were in Sheffield and Great Barrington, Massachusetts, and I was directed in one store to a fine small collection of music.  Someone had taste: there were Cole Porter songs I’d never heard of, a Swing Era-vintage STOMPIN’ AT THE SAVOY, and a batch of early African-Americana: IF THE MAN IN THE MOON WAS A COON and BY THE WATERMELON VINE, MAH LINDY LOU.  But these nicely-preserved artifacts were out of my price range.

Records, too, are usually disappointing: the great days of junking for Paramounts and Gennetts are long, long gone.  More typically I face Bobby Vinton and Frankie Carle, Donna Summer and Christmas songs.  Now and then a popular Goodman or Glenn Miller collection emerges, or a Jazztone from the Fifties, but such appearances are not the rule.

Today, which happened to be the first Monday in August, before we turned for our temporary country home, the Beloved said, “Let’s cross the street and go into that shop, the one advertising farm tables.”  The shop was somewhat disorderly, and the owner was surprised, he said, that he could direct me to some sheet music (which turned out to be in bad shape).  On the way there, my vigilant eye was caught by a pile of records — microgroove issues without cardboard jackets scraping against one another mingled with 78s.

When looking through records, one tends to make judgments on what one finds most often: too many Sammy Kaye and Eddie Fisher records and I begin to droop.  78s from the Fifties, obviously, are newer and have had fewer chances to crack and break.  All was reasonably dull until I came to two records, almost adjacent to one another.  I asked the owner, as innocently as I could, what he was charging, and he said, “Oh, a dollar apiece.”

When I took my two finds to him, he said, “Oh!  These are more valuable.  I thought that pile was only Sinatra and Tony Bennett.”  I stood there quietly and said, “Yes, they are more valuable.  What do you want for them?”  And he smiled at me, rather resignedly, and said, “Oh, a dollar apiece,” which I happily paid him.  It was an odd moment: he knew they were worth more but was being generous and perhaps feeling relieved of the burden of two more objects that threatened to overwhelm him.

Neither record is in splendid condition.  But they both have been played over and over again, which makes them more valuable emotionally even if some eagle-eyed grader would rate them somewhere between V- and G.  Who knew that Bix and Bing got to Massachusetts, and that they had been preceded by the Original Memphis Five?  Someone in the Twenties had, as they say, an ear.  And you can now see the results. 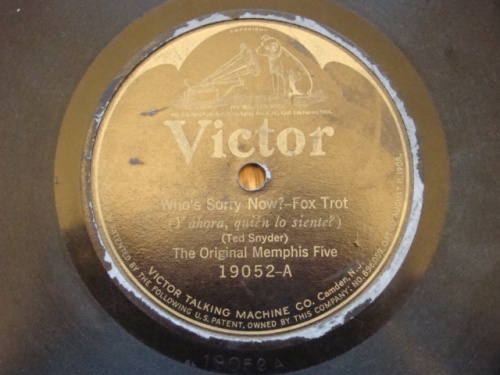 The photographs are slightly blurry, but my pleasure in these discoveries and the casual generosity of the shop owner is sharp and clear.  “From Monday on, we’ll be in clover . . . !”

Posted in "Thanks A Million", Irreplaceable, It's A Mystery, Jazz Titans, Pay Attention!, The Real Thing, The Things We Love