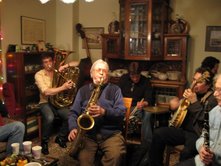 A PRINCE OF A GUY

Prequel: After spending a wonderful week in Israel (during which time he had, curiously or presciently, found the spot where he wanted his cremated ashes scattered), Sam Parkins fell gravely ill. We lost him on November 18, 2009.

Toot Toot Tootsie Goodbye
I Wish That I Could Shimmy Like My Sister Kate
I’m A Ding Dong Daddy From Dumas
On the Alamo
These were the songs that Sam choose to play (and sing boisterously!) as solos over this last year or so since I met him. And what a Sam list it is: ebullient, eccentric, retro but vividly alive, audience-engaging, and-in the case of “On the Alamo”-very, very tender.

Sam’s musical artistry was all this. He played clarinet and tenor saxophone with a gutsy intensity that could blow right through you, but sometimes the yearning tore you in half instead. He worked professionally in idioms ranging from classical (his training) to post-swing to traditional (his heartbeat). This last year found him playing with musicians spanning 60 years in age, including regular appearances with the Gotham Jazzmen and Ronnie Washam & Friends and guesting with the Cangelosi Cards. Music never got old for Sam. There was always a new clarinet on the horizon.

And that wasn’t the half of it, either. The record business knew him as a first-rate producer for over 25 years, issuing albums of artists as diverse as Charles Ives to Cecil Taylor to the Preservation Hall Jazz Band-and in his humanistic way he championed them all. (He also won a European Grammy, 4 Grammy nominations and was praised by Gary Giddins in a recent online interview as a “solid, canny producer.”) He composed chorales of startling complexity with lyrics based on Biblical references. His engrossing, ever-evolving memoir and/or ebook chronicled the musical/political/social/historical/personal cataclysms and vagaries of the last three-quarters of a century in an emotive-intellectual-poetic style, Pauline Kael crossed with Dylan Thomas.

My husband, writer Robert Levin, and I came to know Sam through the NYC traditional jazz scene and he embraced us immediately. At one point, at his request, we’d hoped to work with him on his voluminous “Journey to Bohemia” project. As can happen, however, with 3 professional agendas, he wanted both too much and too little from us, and after a delightful but revealing dinner at his apartment we realized with heavy hearts that we would have to extricate ourselves from involvement. BUT: Not to worry, dear people, said he, let’s just be friends!

So Sam. It seems clear that this smart man was remarkably able to reconcile conflicting styles, eras, genres, desires, people, and get to the good part. He knew what to keep, and he had about a billion friends because of that. Also, because he LOVED them, and so many things. He loved riding his bicycle in Central Park. He loved his cats. He loved sharing nature photography. He loved his country. He missed his wife.

And it was so Sam of the life-affirming Mr. Parkins to die on vacation, seeing beautiful things, visiting dear friends, choosing where he wanted to Rest (but maybe not so soon). Goodbye tootsie goodbye, you ding dong daddy you–and may flights of angels…

Postscript: the photograph of Sam was taken at the 2008 New Year’s Eve party at David Ostwald’s apartment.  David is to Sam’s left, Howard Alden and Joe Muranyi to his right.

Posted in "Thanks A Million", Awful Sad, Irreplaceable, Pay Attention!, Swing You Cats!, The Heroes Among Us, The Real Thing, The Things We Love