It has its own rhythm, doesn’t it?  Here are the latest delicacies up for bid on eBay.

James Moody, who just left us, with his whimsical signature:

Dear Maxine Sullivan, giving someone her home address, once upon a time: 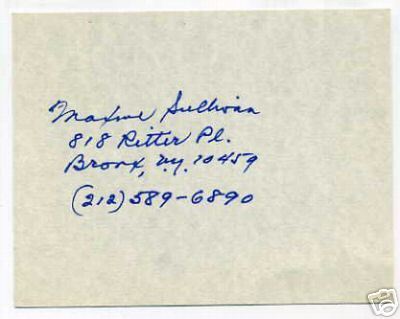 Kid Muggsy, faithful to the spirit of Joe Oliver to the end:

Now . . . shut your eyes and imagine the sound of this collective ensemble.  I hear Maxine carrying the melody line, Moody and Slim improvising vocal counterpoint behind her; Muggsy, Erroll, and Slim keep the rhythm going.

That should take your mind off of holiday shopping!

David Weiner, Swing Era scholar and friend from ‘way back, sent along these pictures of Mildred Bailey — looking more sunny — and news that she did appear in a 1933 Universal Pictures musical short subject (not yet transferred from the negative) in which she sings IS THAT RELIGION in “full go-to-meeting garb,” happily.  Waiting eagerly . . .

Until that surfaces on DVD, here are three photographs of Mildred — I’ve only seen the middle portrait study:

In the first, she’s in a CBS television studio.  The pianist is Ellis Larkins.  Can anyone identify the bassist? 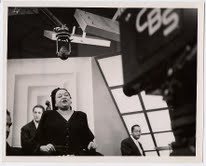 Finally, a publicity shot of Mildred and Benny Goodman — possibly 1939-40, when she recorded with the band for Columbia.  Mildred is pointing at Benny’s tiepin.  Readers are free to add their own subtexts.

Posted in "Thanks A Million", Irreplaceable, Jazz Titans, Pay Attention!, The Real Thing, The Things We Love

I doubt that my readers have been kept awake by the mysteries contained in this photograph, but I decided to open the discussion to the members of a jazz research group that includes the most respected jazz scholars . . . and they added a few insights.

Michael McQuaid had suggested that the unknown baritonist might be Bill Miles — only on the basis of Miles’s apprearance on some Wild Bill Davison Commodores.  Plausible, but neither of us had any idea of what Miles looked like.

Then Peter Vacher, someone who knows things first-hand (he’s written a fine book collecting his interviews of famous jazz players — SOLOISTS AND SIDEMEN — worth searching out) emailed me:

Your photo sent me scurrying to my photo collection.  I’m pretty sure your man is Billy Miles.  I have him in a photo that Joe Darensbourg gave me showing a jam session at the Blue Bird in LA in the early 1950s. It’s an interesting line-up with Joe, Chicago drummer Bill Winston (visiting from Honolulu) and Billy Miles, playing baritone, among others.  My picture shows Miles as identical to your picture, same facial expression, parting and hair style.  Case closed?  Hope so.

That might have been the end of it if not for Dan Morgenstern, who not only knows things but has been a part of the New York jazz scene for more than half a century.  Dan proposed that 1) he had been at Stuyvesant Casino and Central Plaza, both of which were large catering halls (Central Plaza is recognizable in photographs when musicians are posed against its multicolored venetian blinds) and that it might be Lou Terassi’s; 2) the microphone was for radio broadcast; 3) it wasn’t Sidney Catlett but Art  Trappier.  I had written here that the upholstered background seemed more a night club’s decor, but I was crestfallen to lose Big Sid, with all respects to Art.  And there the matter might rest.

But what if it was taken at a “Doctor Jazz” broadcast?  Doors shut, doors open.

Posted in Ideal Places, Irreplaceable, It's A Mystery, Jazz Titans, Pay Attention!, Swing You Cats!, The Real Thing, The Things We Love

Much earlier in 2009, a number of jazz photographs came up for sale on eBay.  They were taken at Stuyvesant Casino in 1950, and the musicians depicted were heroic figures to me.  As always on eBay, two things happened: the bidding skyrocketed at the last minute, and (in the calming grip of Prudence) I refused to plunge into three-digit prices . . . so I ended up the proud purchaser of two of a lot of five or six.  (The photograph that isn’t the subject of this blogpost showed Wild Bill Davison and Benny Morton.)  The other mild disappointment was the size of the originals, approximately two by four.  Inches.

Our subject for today is a little band of deities.  Hot Lips Page, Sidney Catlett, Pee Wee Russell, Ralph Sutton.  It’s a poignant photograph, because both Lips and Big Sid wouldn’t live much longer.  Pee Wee was months away from his hospitalization and looks gaunt; Sidney, who had suffered a heart attack, looks sadly small behind his drums.  Perhaps some of this is the camera angle and that the horns are sitting down, which isn’t the way we usually see them in photographs.

The title of this post, however, refers to the gentleman on the far right, busily playing the baritone saxophone.  He isn’t the man you would expect — Ernie Caceres — and even the photographer didn’t know who he was.  I showed a copy of this photograph around at Whitley Bay to a number of jazz scholars who happen to be splendid players: Bent Persson, frans Sjostrom, the erudite Norman Field, and Matthias Seuffert — and no one recognized the saxophonist.  Of course, it could have been someone sitting in, some alto / baritone player from a big band — but I don’t know if mere mortals ascended the stage at the Stuyvesant Casino to play alongside such deities.

I ask my readers: who’s that man?  And while they’re at it, I ask them to consider — in their mind’s ear, if there is such a thing — what this little band might have sounded like.  “Celestial” is an understatement as far as I’m concerned. 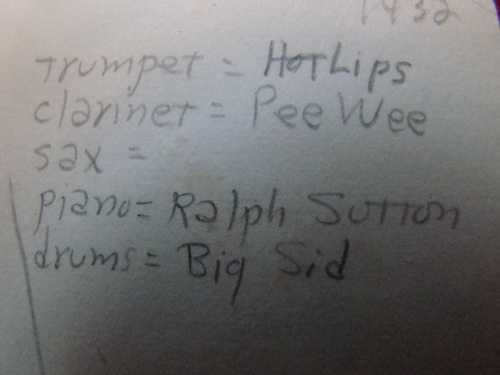 Final afterthoughts: does anyone recognize the photographer — by style or by handwriting?  Somehow I don’t think this is an amateur’s snapshot, not least because of the pencil notation “1432” we see above.  And did the Stuyvesant Casino have a bandstand like this one?  The upholstered wall (leather or naugahyde) resembles the backdrop I’ve seen in photographs of the Three Deuces.  Research!

Posted in Ideal Places, Irreplaceable, It's A Mystery, Jazz Titans, Pay Attention!, The Real Thing, The Things We Love

Here are two of William P. Gottlieb’s less known but highly evocative photographs from the collection now held by the Library of Congress.  First, a wonderful trio — three musicians who never found themselves in a recording studio, although the pianist and clarinetist joined forces, however briefly, for a famous and elusive 1936 radio broadcast called “A Demonstration of Swing.”  Here they are, circa 1939, at the National Press Club in Washington, D.C. — Joe Marsala, Zutty Singleton, and Teddy Wilson:

And this must have been a very sedate night at Jimmy Ryan’s in 1947 — featuring Hot Lips Page, J. C. Higginbotham, Bud Freeman, and Freddie Moore, with — no doubt — other stomping compatriots out of the range of the photograph.  Moore looks atypically somber, but I am sure that he was alone in that regard: