ON MATTERS OF TASTE, HERSCHEL EVANS HAD DEFINITE VIEWS

A newly discovered photograph, circa 1937, of Freddie Green and Herschel Evans, thanks to Christopher Tyle from here.

Herschel “Tex” Evans, born in Denton, Texas, did not live to see his thirtieth birthday.  We are fortunate that he was a member of the very popular Count Basie band of 1937-39, thus there are Decca studio recordings and airshots, and that John Hammond set up many small-band record dates for Basie sidemen.  One can easily hear Herschel’s features with the band — BLUE AND SENTIMENTAL and DOGGIN’ AROUND — but some of the small-group recordings are not as often heard.  A sample below.

Here he is with a Harry James small group (among others, Vernon Brown, Jess Stacy, Walter Page, Jo Jones) for ONE O’CLOCK JUMP:

from the same session, IT’S THE NATURAL THING TO DO:

And HEAVEN HELP THIS HEART OF MINE:

from a Harry James date, I CAN DREAM, CAN’T I? with a sweet vocal by Helen Humes:

Herschel has been overshadowed by Lester Young, and has been seen by many as the artistically conservative foil to Lester’s amazing inventions — but one hears in Herschel something lasting, a deep, leisurely, soulful romanticism.  In sixteen bars at a slow or medium tempo, he emerges as a leisurely explorer of sound and timbre, a man sending romantic love through his tenor saxophone. Listening to Herschel is rather like having a big woolly coat thrown around one’s shoulders on a cold night, his sound is so embracing and so warm.

So we might encapsulate Herschel as a young man who died far too soon and as a great Romantic.

But he was also remembered by his colleagues as a serious discerning person, someone with strong opinions and positions, fiercely defended positions.  The excerpts below come from the delightful book BUCK CLAYTON’S JAZZ WORLD (Oxford University Press, 1987, pp. 111, 108):

Herschel Evans was one of the neatest dressers I had ever known and would always take some time to dress. Tex was so immaculate that he wouldn’t go out of his room until everything, and I mean everything, was just right.  He looked more like a very handsome schoolteacher or a lawyer than a jazz musician.  He was very popular with the ladies and didn’t either smoke or drink.  I should say that he was popular with most ladies, because I can’t say that Billie  Holiday was in the same category. From the very first time they laid eyes on each other there was a deep dislike for each other. Neither had done anything to the other, they just couldn’t stand each other and that was the only reason. Sometimes, when Herschel wouldn’t even be aware of Billie looking at him, she would say, “Look at that MF, I can’t stand him.  Look at him, standing back on his legs and sucking his teeth.  He thinks he’s cute.”  And Herschel would do the same thing when Billie wasn’t looking.  He’d say, “Look at that old bitch.  Who the hell does she think she is?” In other words they got along like a cat and a dog, natural enemies if there ever were any (111).

. . . shortly after Basie had arrived in New York and we didn’t know anybody, we were invited by John Hammond to attend a big jam session where Chick Webb was going to play.  Duke Ellington was going to be there with his band, Eddie Condon was going to be there with all his dixieland guys and a lot of other musicians who lived in New York.  Basie accepted the invitation and we all went to this big bash downtown somewhere in New York on the 16th floor.  I don’t remember the address nor the building but there were many, many people there to dig these three big bands and all the other cats.  It was there that I first saw Stanley Dance, who had just been in New York a short while from England; he hadn’t yet married Helen Oakley, who was then very prominent in jazz circles. We arrived at the building where the jam session was being held and went downstairs to listen to whoever was playing at the time and before we were to play.  I think Duke was playing.

After digging the Duke for a few minutes I noticed that I had forgotten my little bottle of trumpet-valve oil which I needed, so I went back to the dressing room to get it.  While I was looking for it in my trumpet case Herschel Evans came in and there were only the two of us in the room.  I don’t know why he came in but a few minutes later, after we had talked about the  guys jamming downstairs, he noticed Walter Page’s sousaphone mouthpiece laying on a table, where I guess Page had left it before he went downstairs.  “Well look here,” said Herschel when he saw Page’s piece, “I won’t be hearing that damned sousaphone anymore.” Herschel hated it when Page would play the sousaphone sometimes in our arrangements.  So he goes over to the table, picked up Page’s mouthpiece, went over to the window and threw it out.  Out the window from sixteen stories up.  Then he looked at me and said, “Don’t tell anybody.”

I said, “Hell, it’s none of my business.  Why should I say anything about it?” Then he went to where Freddie Green’s pork-pie hat was hanging along with Freddie’s coat.  He walked over to the window again and threw it out of the window too.  Then he went back downstairs to the big session.  When it was all over and we went upstairs to put our instruments away Page was fuming about not finding his mouthpiece and Freddie couldn’t find his pork-pie hat. Herschel hated pork-pie hats too.  So they both just had to come back to the hotel without the mouthpiece and the hat.  I don’t think they ever knew what happened.  I know I never told them. Herschel just went in and acted like he didn’t know from nothing (108).

and Exhibit B (although the more characteristic hat seems to have been black): 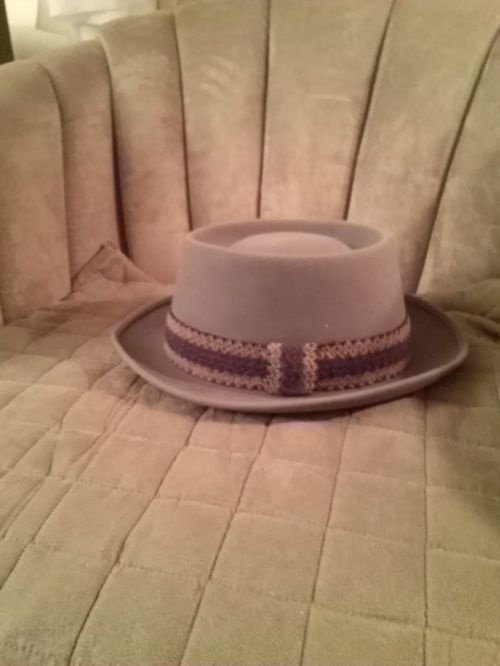 Now, this narrative is not to be construed as JAZZ LIVES’ endorsement of such capricious behavior.  Theft of property is a serious offense.  However, there were no police reports of any innocent passers-by below suffering a concussion because of a sousaphone mouthpiece dropped from sixteen floors up (perhaps a calculation for a swing Galileo?) and perhaps someone with less exalted fashion standards than Herschel’s took the pork-pie hat as a stylish gift from Heaven.

Some may see Herschel’s behavior as deplorable, and I wonder what would have happened had he time-travelled to my apartment and opened my clothes closet: what would have remained on my return?  (I don’t have any pork-pie hats, but I surmise there is a goodly assortment that would offend his sensibilities.)

However, Freddie Green kept the Basie band afloat long after this mysterious incident, and if he felt a deep wound he never told anyone.  (There is a new biography of him coming out soon; I will immediately check to see “Evans, Herschel,” in the index.)

And think — if you can — of the Basie rhythm section anchored not by string bass but by sousaphone.  The mind reels.

I like people who not only state their principles but who put them into action.  So I miss Herschel Evans, singular musician and man of definite tastes.

Posted in Irreplaceable, It's A Mystery, It's All True, Jazz Titans, Jazz Worth Reading, Swing You Cats!