DENNIS LICHTMAN and THE QUEENSBORO SIX: “JUST CROSS THE RIVER” 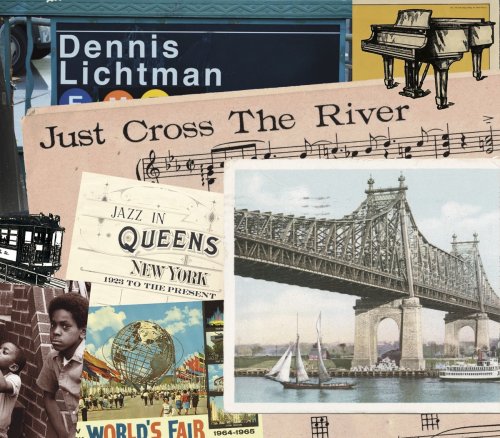 Slightly less than three years ago, the superbly gifted multi-instrumentalist / composer Dennis Lichtman assembled his Queensboro Six and gave a concert at the Louis Armstrong House Museum in Corona, Queens.  Here is the first half, and here is the second.  The music was multi-colored and seriously rewarding: Dennis’ tribute to the true jazz borough, Queens County, New York, home of so many jazz figures — from Clarence Williams and Basie to Louis and Dizzy, Milt Hinton and James P. Johnson — and currently home to so many more of the musicians we love.  Dennis assembled his Queensboro Six for a truly delightful new CD, its title above, its theme song below:

This disc is a model of how to do it — musicians and composers take note.  For one thing, the band has an immense rhythmic and melodic energy, but the pieces are compact — sometimes explosions of twenty-first century Hot, sometimes evocative mood pieces, but none of them sounding just like the preceding track.  Dennis is a real composer, so that even an exploration of Rhythm changes sounds lively and fresh.  His arrangements also make for refreshing variety, so that one doesn’t hear him as the featured soloist to the exclusion of the other luminaries, and the performances are multi-textured, harking back to the later Buck Clayton, to Charlie Shavers’ work for the John Kirby Sextet, Raymond Scott, to sensitive elegies and musings that hint at the work of Sidney Bechet and Django Reinhardt.  You’ll also notice compositions by and associated with those Queens denizens Louis, Fats, Clarence Williams.  As that borough boasts some of the finest ethnic restaurants, this disc offers one savory musical dish after another.   As they used to say, “For listening and dancing”!  Peter Karl is responsible for the lovely recorded sound and Ricky Riccardi for the fine liner notes.

Here are some details.  The musicians are Dennis, clarinet; Dalton Ridenhour, piano; Gordon Au, trumpet; J. Walter Hawkes, trombone; Rob Garcia, drums; Nathan Peck, string bass — with guest appearances by Jerron “Blind Boy” Paxton, vocal , guitar; Mazz Swift, violin, vocal; Terry Wilson, vocal; Nick Russo, guitar.  If you know even a few of those performers, you will want this disc, because they seem especially inspired by Dennis’ compositions, arrangements, and playing.  And no one imitates any of the Ancestors.

The songs are 7 EXPRESS / FOR BIX / MIDNIGHT AT THE PIERS / ROAD STREET COURT PLACE AVENUE DRIVE / SOMEDAY YOU’LL BE SORRY / WALTZ FOR CAMILA / L.I.C. STRUT / JUST CROSS THE RIVER FROM QUEENS / BLUE TURNING GREY OVER YOU / 23rd BETWEEN 23rd AND 23rd / SQUEEZE ME / THE POWER OF NOT THEN / I’D REMEMBER HAVING MET YOU / CAKE WALKING BABIES FROM HOME.

You may order a download or a disc here at very reasonable prices.

But perhaps more important than the disc itself, on August 1, the Queensboro Six will play two sets at Dizzy’s Club Coca Cola.  Tickets and details here.  Get yours today: