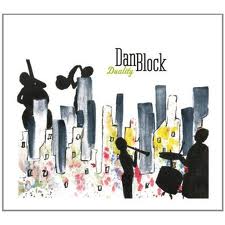 As a player expertly able to fit himself into many kinds of music, Dan Block has added his own flavorings to many sessions led by others.  But his finest accomplishments may be the four CDs under his own name: AROUND THE BLOCK (1999); DAN BLOCK PLAYS IZZY BALINE a.k.a. IRVING BERLIN (2004); ALMOST MODERN (2006); FROM HIS WORLD TO MINE: THE MUSIC OF DUKE ELLINGTON (2010).  Each of these discs is the result of deep thinking, superb musicianship, intense feeling, wit, and a pungently lively imagination.

The newest one, DUALITY, is a frankly astonishing presentation of duet performances.

The repertoire Dan has chosen ranges from Ellington, Gershwin, Styne, Beiderbecke, Kern, Dameron, from a sweetly ancient pop song to Brazilian chorino to Shostakovich.  Each piece and each performance has its own logic and splendor.  The music is varied but not self-indulgent; it is beautiful but never merely pretty.

Because creativity is intensely difficult, many experienced improvisers have a series of learned gestures appropriate to the situation they find themselves.  “You want me to fit into a 1929 big band?  OK, I’ll put on that hat.  Back a torch singer?  Can do.  It’s atonal time?  Let me rummage in my case for my special atonal galoshes.”  Dan Block never plays by-the-numbers: rather, in the best spirit, he makes it up as he goes along, adapting himself to the circumstances and adapting the circumstances to himself.

DUALITY is a beautiful representation of the many worlds Dan Block creates for us.  Each of the eleven performances has the depth of feeling and intelligence one would find in a moving one-act play.  The disc becomes a series of gratifying voyages to lands we might have thought we knew — with new beauties revealed to us on the first hearing and on subsequent visits.  There is the bouncing curiosity of THE JAZZ SAMBA, the playful conversational jousting of PITTER PANTHER PATTER, the yearning of IF YOU COULD SEE ME NOW, the water-pistol fight of LYRIC WALTZ, the shimmering melancholy of IN THE DARK . . . and so much more.

I always think it nearly rude to write, “Go here.  Buy this.  Put everything else down and listen.”  But in the case of DUALITY, I feel myself entirely justified.  Dan Block has created music that resonates long after the disc has come to a stop.  A brave explorer, he takes us along on his quests.

You can hear excerpts and purchas DUALITY here and here — and visit Dan’s own site here.

Posted in "Thanks A Million", Bliss!, Generosities, Irreplaceable, Jazz Titans, Pay Attention!, Swing You Cats!, That Was Fun!, The Heroes Among Us, The Real Thing, The Things We Love, Wow!

BIRD, JO JONES, AND THAT CYMBAL

Here, once again, is the story of a teenaged Charlie Parker, brilliant but incomplete, getting humiliated in public by drummer Jo Jones:

The tale is always told as a defining moment in the history of jazz: a youth on his own self-defined quest, being mocked and deflated by one of the aging masters — someone whom he ultimately surpasses.  It is thus a narrative of payback, of the underdog becoming the sun-god.

But every time I read it, especially since it is substantiated by Ross Russell, a notable fictionalizer, I wonder if it ever happened.  Or if it happened this way.  I met and spoke with and heard Papa Jo in his later years, and I have no trouble imagining him as a man intolerant of mediocrity, a man who spoke his mind, a man who would even be contemptuous of what he considered incompetence.

But drummers know and value and love their equipment.  They spend hours selecting the right cymbals, the right sticks.  Cymbals may be metal but they break, they bend, they become unplayable.

So I propose that what we have here is myth, inflating and uncontrolled.  Perhaps Jo made loud gonging sounds on his cymbal; perhaps his derision was palpable.  But I can’t see him throwing a cymbal, the cymbal sailing through the air, landing at the poor humiliated altoist’s feet.  You can, if you like.

UPDATE as of March 2017: all of the above might well be emotionally correct, but I must stand corrected.  I’ve learned from several sources including the very revered and reliable Dan Morgenstern that the incident of Jo, Bird, and the cymbal did happen, as witnessed by string bassist Gene Ramey.  Why am I letting this post stand, then?  Call it perversity, or call it this: anyone has the right to be wrong, and let wrongness stand as an expression of feeling, unaffected by those annoying facts.

Posted in It's A Mystery, Jazz Titans 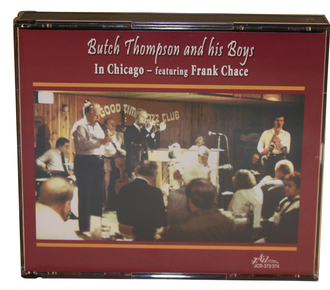 Clarinetist Frank Chace stood very still when he played, his eyes closed.  In the fashion of the true mystic, he looked inwards, seeking something new, beautiful, personal.  His own speech, his own pathways.

A Chace solo winds around the melody and the chords, hesitant but guided by its own self-trust: “I don’t know the way but I know where I’m going.”

He didn’t record enough for any of us, and often he seemed to be making his way through his fellow players — yearning to break free.  When he was playing alongside his great friends Don Ewell or Marty Grosz, he knew that they would supply an indefatigable rhythmic pulse, they would lay down the right chords, and he could then soar.

And soar he did.

In 1985, when I had only recently encountered the mysterious, elliptical Chace universe, Jazzology Records issued a record of a live session led by pianist Butch Thompson.  I thought it remarkable that here was a new Frank Chace record: it remains a treasure.  Charlie DeVore, cornet, John Otto, clarinet, alto sax, vocal; Hal Smith, drums; Jack Meilahn, guitar; Bill Evans, bass, were the other fellows on the stand.  And the session was full of delights, aside from Frank: Hal’s press rolls and shimmering hi-hat; the solid rhythm section; Otto’s sweet, thoughtful alto; De Vore’s Muggy Spanier-emphases.  But Frank Chace produces marvel after marvel.

Hear him chart his own paths, his eyes closed, his only goal to create his own speech.  Frank was rarely — if ever — satisfied with something he had recorded, so I can’t say that he was complacently pleased with this or any other disc.  About an early session with the Salty Dogs, he told me, “I was fighting for my life!”  But no strain can be heard here: just beauty, impassioned or quietly subversive.

Now, the complete session (offering twenty-four selections) is available on a double-CD Jazzology set.  (JCD 373/374), available at a variety of online sources.  I can’t praise it highly enough.

The selections are I FOUND A NEW BABY / ROSE ROOM / I SURRENDER, DEAR / I CAN’T BELIEVE THAT YOU’RE IN LOVE WITH ME / SWEET SUBSTITUTE / SWEETHEARTS ON PARADE / ONE HOUR / JAZZ BAND BALL / IDA / I WOULD DO ANYTHING FOR YOU / SWEET LORRAINE / THERE’LL BE SOME CHANGES MADE / NOBODY’S SWEETHEART / HOME / JELLY ROLL / YOU TOOK ADVANTAGE OF ME / BLUE TURNING GREY OVER YOU / OH, SISTER, AIN’T THAT HOT? / DO YOU KNOW WHAT IT MEANS TO MISS NEW ORLEANS? / FROM MONDAY ON / S’POSIN’ / SHIM-ME-SHA-WABBLE / MY HONEY’S LOVIN’ ARMS / THANKS A MILLION.

Frank doesn’t make an obsession out of being “untraditional,” but he won’t play the expected lines, the predictable harmonies.  You might think you know where his next phrase is going . . . but it turns out that he has led us in his own way, eyes closed, finding new surprises.

Listen to his ardor, his courage, his whimsical explorations.

“THANKS A MILLION”: CLICK HERE.  ALL MONEY GOES TO THE MUSICIANS!

FOUR STRINGS IN MY FUTURE?

Two days ago on Maui, we wandered into a second-hand store in Wailuku and I saw a beautiful ukulele hanging on the wall.  In the grip of musical hubris and hopefulness, I asked to see it and improvised a simple Thirties single-note riff, impressing the Beloved, who said, “I didn’t know you could play!”  “I didn’t either,” I replied.

Since I was quite young, I have made half-hearted attempts at learning a number of musical instruments.  Some of those nstruments ornament my apartment, although I am cautious lest it turn into a one-bedroom version of a music store / pawnshop.

The ukulele has appealed to me for a long time, because I had the notion that it might be fairly simple to play — four strings rather than some more intimidating number, and not a great deal of aesthetic ambition attached to it (unlike, say, the violin).  It also has a Jazz Age history — on all the Twenties and Thirties sheet music I collect, the line above the treble clef has chord diagrams for imagined ukulele players to read off the page — and the diagrams are just my speed, a diagram of the four strings with a dot on each string to show where the novice should place his or her fingers.

I haven’t bought the ukulele yet, although we visited the Mele store, where Peter (the resident self-taught virtuouso) tried to teach me to play YOU ARE MY SUNSHINE, with middling results. (I am a recalcitrant, stubborn pupil.)   The second-hand store was closed today, and I refuse to pay full price unless I am compelled to by circumstances.  I also don’t plan to turn into Arthur Godfrey, Don Ho, or Tiny Tim, never fear.  My aesthetic model is Cliff Edwards. I don’t aspire to starring in Technicolor, being the voice of a Disney character, or dying penniless, but his swinging insouciance is immensely appealing.

There are many wonderful Ukulele Ike clips on YouTube — too many to up or download, so you might want to investigate them on your own.  I’ll report back about the results of my four-string quest.

(On YouTube, you can also see a brief clip of Buster Keaton at home in 1965, happily croaking his way through “June Night,” accompanying himself on a tenor guitar with a fair deal of skill.  Who knew?)

Posted in The Things We Love