The global attic / museum / antique shop known as eBay never fails to surprise.  Here’s something recently posted — the sheet music for a James P. Johnson / Andy Razaf song, HAVIN’ A BALL.  I don’t think it enjoyed wide currency, and I suspect it was another version of SPREADIN’ RHYTHM AROUND and THE JOINT IS JUMPIN’ — that is, once the music is hot, everyone is happy.  Valid enough. 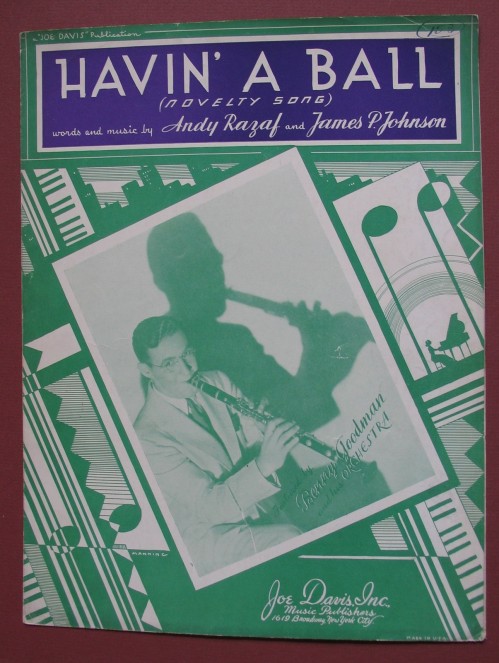 James P. recorded it for Columbia in 1939 — under the aegis of John Hammond — with a band including Henry “Red” Allen, Gene Sedric, J. C. Higginbotham, and Sidney Catlett — but the sides weren’t issued at the time and they only emerged on a 1962 compilation of James P.’s Columbia recordings.

Sometimes the business of music is as intriguing as the music itself.  Too much has been made of Goodman as Caucasian exploiter, and in 1937 he hardly needed to extort money from James P., Razaf, or Joe Davis to have his picture on the cover — a sure guarantee of increased sales.  And he isn’t a “co-composer” here, which suggests that the Goodman band actually played this song.  Goodman expert/ discographer David Jessup says that no broadcast performances of it exist to his knowledge.  Of course, the band might have played it at a dance that wasn’t documented or for a broadcast that wasn’t notated by Bob Inman or captured by an enthusiast with a disc recorder.

But I wonder how this partnership came to be.  Did one of the composers or publisher Davis “reach out” (as they used to say on television police shows) to a Goodman arranger and work out a mutually advantageous arrangement: a good tune for a swing band, let’s get it some airplay?  Youth wants to know.

Alas, I can’t provide an audio track.  You’ll have to find a copy of the Columbia lp FATHER OF THE STRIDE PIANO or the Classics CD on which it appears: I recall a Meritt Record Society vinyl issue had several alternate takes.

In its heyday, the tune was recorded by Fats Waller, Billy Kyle, George Zack, Max Kaminsky . . . and there is presumably a 1958 Goodman version, which suggests that an actual arrangement was created.  But when?  The only contemporary version I know is found on the Arbors CD by the International Hot Jazz Quartet — Duke Heitger, Engelbert Wroebel, Paolo Alderighi, Oliver Mewes.

Have yourself a ball!

Posted in "Thanks A Million", It's A Mystery, Jazz Titans, Swing You Cats!, The Things We Love

Wordsworth was correct when he wrote that in “getting and spending” we “lay waste our powers.”  I live not too far from a large shopping mall, and visit it only when other ways to buy something necessary are worse.  But certain kinds of “getting” and “spending” aren’t so bad: when the purchases uplift the spirits and don’t cost much.  Exhibits below.  First, sheet music from a Vallejo, California antique shop. 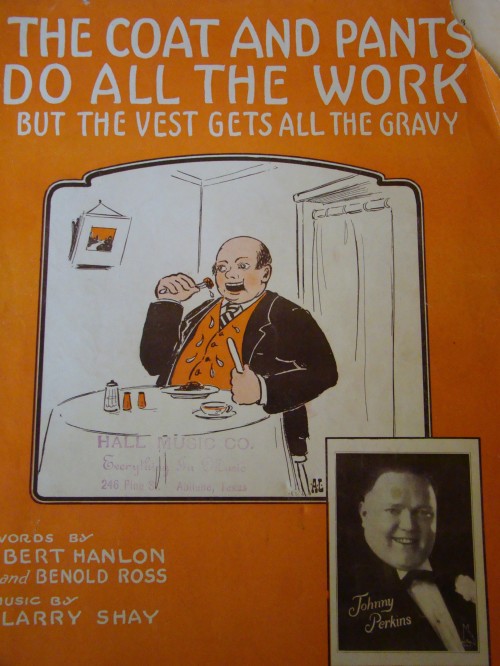 I was motivated to buy this 1926 laff-riot because of the title and the line drawing — I sympathize with that fellow, even though I haven’t worn a three-piece suit in years.  However, instead of being a comic ditty about table manners, it is more literal — X does all the work but Y, who doesn’t, gets all the credit.  And it must have been a smash in vaudeville, for the inside front cover contains 24 knock-em-dead versions of the chorus.  I will spare you.  And if the name “Larry Shay” looks familiar, he was in part responsible for WHEN YOU’RE SMILING. 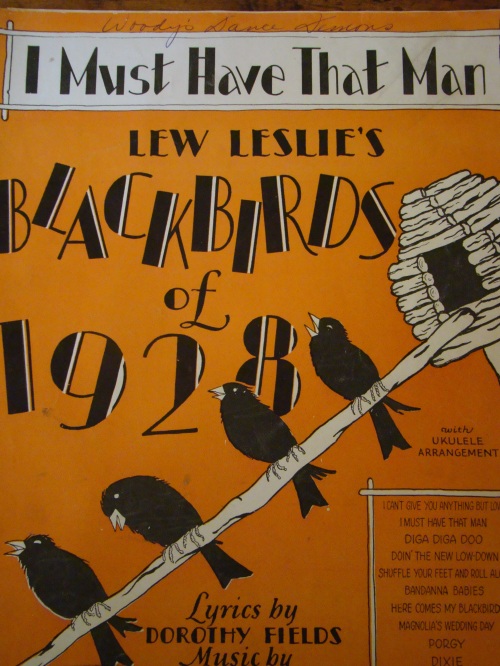 A much more seriously valuable song: I can hear Billie singing it or Ed Hall playing it.  The most touching part of this sheet music is the inscription of ownership on top — I don’t know if it’s entirely visible, but this copy was the property of WOODY’S DANCE DEMONS.  I looked them up on Google and didn’t find anything, but that doesn’t mean they didn’t play well in 1929 or 1930.

This song is deeply unimaginative, but I thought that if the Benson Orchestra had played it and its composer had written OKLAHOMA INDIAN JAZZ, it might have some merit.  We live in hope. 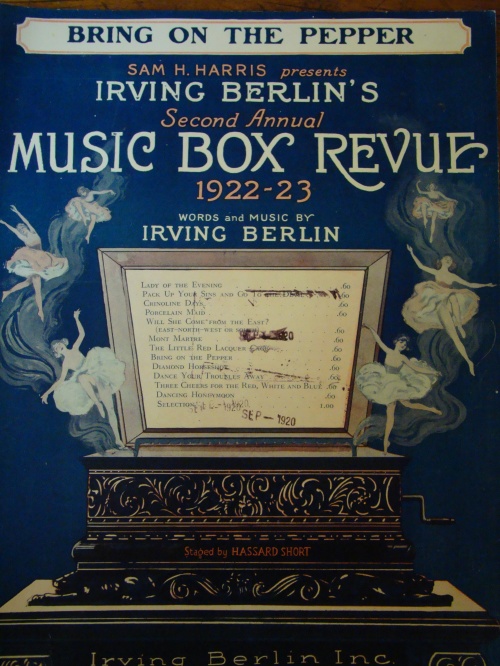 I wouldn’t call this a memorable Berlin tune (I suspect it was meant as a frisky dance number) but it does contain the lines, “Let me mingle with a peppy jingle / That the jazz bands love to play,” which is certainly hip for 1922.

I heard Rosy McHargue sing this on a Stomp Off recording (he must have been in his middle eighties) and thought it was hilarious.  Also, isn’t that the most thoroughly anthropomorphized dog face you’ve ever seen?  Now for several artifacts that are more fragile, heavier, and harder to pack — but no less irresistible. 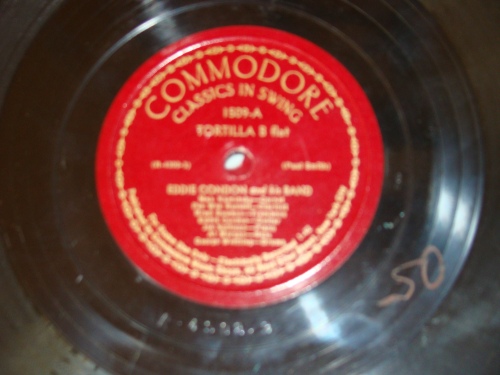 Although I can’t imagine Eddie Condon with a novel in front of him, he admired John Steinbeck and was very proud that they were friends.  Steinbeck loved the music that Eddie and the boys created, with only one caveat: he kept asking Eddie to take up the banjo again, an offer Eddie steadfastly pushed aside.  This 12″ 78 cost more than fifty cents when it was new, and the band is flawless.

Also (not pictured, but you can imagine):

another Commodore 12″ of OH, KATHARINA and BASIN STREET BLUES; a Blue Note Jazzmen 12″ of WHO’S SORRY NOW (no question mark) and BALLIN’ THE JACK.  Moving into the microgroove era, I proudly snapped up a Collectors’ Classics lp of the Red Allen Vocalions 1934-5 (with the exultant ROLL ALONG, PRAIRIE MOON), Ray Skjelbred’s first solo session for Berkeley Rhythm Records, from 1973-4 (signed by the artist), and the JUMP compilation of (Charles) LaVere’s Chicago Loopers, with Jack Teagarden, Joe Venuti, Nick Fatool, and other stalwarts.

Posted in "Thanks A Million", Ideal Places, Irreplaceable, Jazz Titans, Pay Attention!, Swing You Cats!, The Things We Love

Recorded by Red and Miff’s Stompers and featured on Broadway! 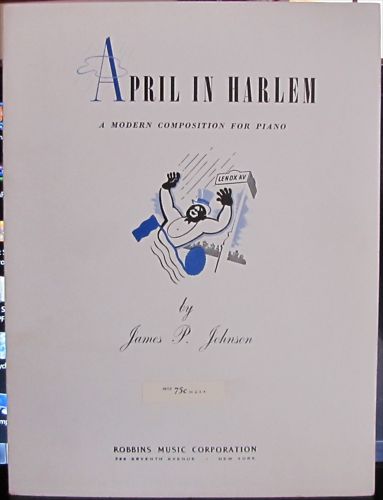 Has anyone heard this? 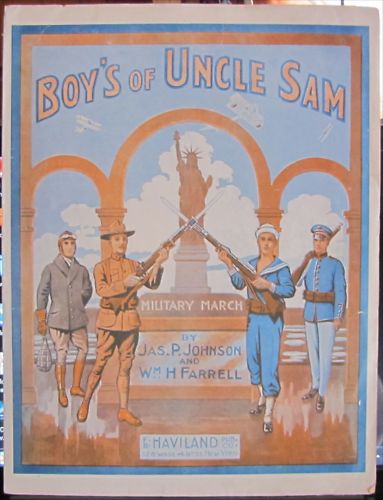 I’d never noticed the superfluous apostrophe before — but a James P. military march is something to marvel at (a patriotic precursor to UNCLE SAMMY, HERE I AM?) 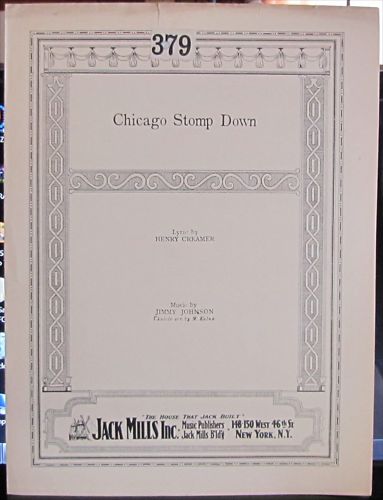 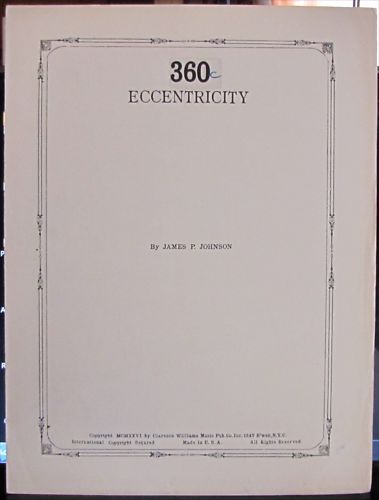 Fifty cents!  Did James P. (who might have thought boogie-woogie monotonous) write these pieces?  I know he recorded one or two boogie-woogie originals for Blue Note and Asch, but these titles are (typically) not familiar.

Yes, that is the correct title for this Novelette.

Not only an ambitious composition, but the soundtrack for the film of the same name.

I’ve been collecting these images from eBay for a few weeks — and they provoke mixed feelings.  I’m delighted that someone so earnestly collected James P. Johnson’s sheet music, a little sorry that it’s being transferred from one collector to another (it would be nice to see and hear these pieces) but grateful that we can see these images.

For all of you to see and admire — more remarkable music from James P. Johnson, the father of the stride piano and so much more.  Courtesy of our national museum-attic-consignment shop-marketplace, eBay:

and the second half (obviously a woman of substance, this 1917 MAMA): 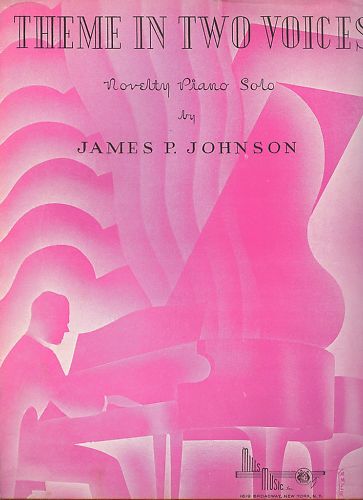 And another rarity (I knew MY SWEET HUNK OF TRASH and YOU CAN’T LOSE A BROKEN HEART, but not this): 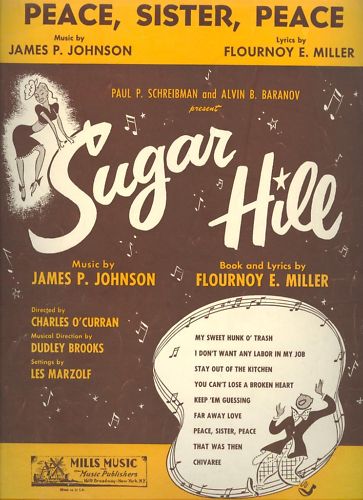 (If someone has a copy of I DON’T WANT ANY LABOR IN MY JOB, please take pity on me: my curiosity is a terrible burden.)

Here’s some sound to go with the Deco covers — James P.’s virtuosic solo recording of CAPRICE RAG (1943, Blue Note), at a tempo both thrilling and exhausting:

Who knows what other treasures the eBay museum has in store?