REVERE THE DEAD, EMBRACE THE LIVING 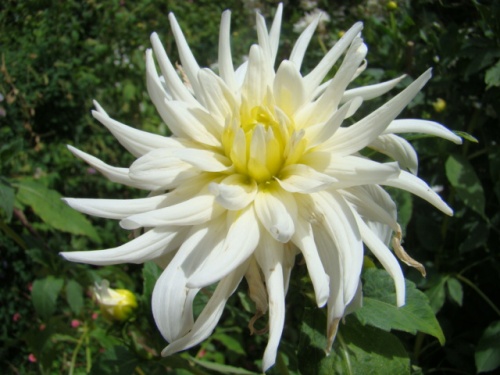 From an English formal garden, 2010, a flower that is very much alive. Photograph by Michael Steinman

When does deep reverence become a self-created prison?

With my video camera, I attempt to capture what I think of as emotionally powerful performances by musicians playing and singing in 2012.  I don’t expect everyone to share my preferences.  But a comment posted on a YouTube video of an artist who isn’t yet forty took me by surprise.  Here it is, paraphrased:

Younger Artist’s performance is alright but isn’t distinct enough. Where are the Xs, Ys, and Zs (insert the names of Great Dead Musicians here)?

My first reaction was annoyance on behalf of the Younger Artist, someone whose work I admire, being made tiny in comparison with The Heroic Dead.

And then I felt sad for the commenter, whose ears were so full of the dead artists he loved that he didn’t have room in his consciousness for someone living who sounded different.

Many of us who love this music have spent a long time entranced by the sounds and images of those people who have “made the transition,” who are no longer on the planet.  Charlie Christian and Jimmie Blanton died before I was born, and that doesn’t obstruct my admiration for them.  So a historical perspective — something to be cultivated — has a good deal of reverence for the dead as its foundation.  Otherwise the reader / listener / viewer chases Novelty: this is the best band because it’s the newest, and Thursday’s child is fairer of face than Tuesday’s.  What was his name again?

But for some listeners, the dark shadow of NOT AS GOOD AS hangs over their experience of this lively art.  So that Kid J, a wonderful musician, is somehow unworthy when compared to Bix, Louis, Bunk, Coltrane, Jo, Billie . . .  And because we can so easily acquire almost every note that Lester Young or Peggy Lee (to pick names at random) recorded, we can fill our ears and iPods with the almost three-dimensional aural presence of our Gods and Goddesses from morning to night.  Very seductive!

What if that idolatry closes the door on our ability to appreciate the men and women who are creating it LIVE for us in clubs, concerts, dance halls, videos, discs, and the like?  The experience of being in the same place as musicians who are improvising is not the same as listening to a recording or even watching the video clip.

The improviser or improvisers creates something new and tangy, something that didn’t exist before, right in front of us.  And if there’s no one recording it with a video camera or an iPhone, it’s gone into memory.  The people on the bandstand giggle, take a deep breath, wipe their faces, take a swig of water, and prepare to create something vibrant on the next song.

This williingness to take risks in the name of music is very brave and very beautiful, and we should embrace the living people who are attempting to make a living by making art.  There will be time to sit on the couch and listen to records or mp3s.  There will be time to make critical judgments that the Living aren’t as good as the Dead.

In the recent past, I have heard tenor saxophonists who made me feel the same way Ben Webster does, pianists who make me as elated as Mel Powell does . . . and I could keep both perceptions in my mind, honoring the living and the dead.

I am not, by the way, saying that Everyone has to like Everything.  My own range is narrow by many people’s standards.  But when I hear an artist I’ve never encountered before, and (s)he elates me, it is a deep reward.  It doesn’t mean I am being disloyal to the dead if I applaud a living musician, does it?  But I think some people live in the land of Either / Or and thus, unwittingly, cut themselves off from possible pleasure.

I imagine someone, seventeen or so, walking past the Greenwich Village club called THE PIED PIPER or the RIVIERA (the latter stands, although without music) in 1944, looking at the sandwich sign on the street, advertising James P. Johnson, Max Kaminsky, Rod Cless, Frank Orchard . . . and thinking, “Nah.  He’s no Fats Waller; he’s no Bix; he’s no Tesch; he’s no Jimmy Harrison,” and choosing not to go in . . . and having the next fifty or sixty years to regret his choice.

Artists (and people) are perhaps only Different . . . not Better or Worse.

Posted in Awful Sad, It's A Mystery, Jazz Titans, Jazz Worth Reading, Pay Attention!, The Heroes Among Us, The Real Thing, The Things We Love