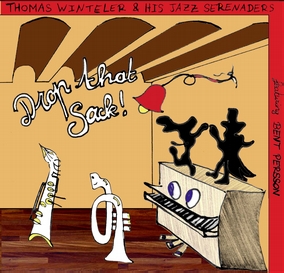 Thomas and his Jazz Serenaders have recorded DROP THAT SACK! — a CD of music associated with Louis and Sidney Bechet, including their collaborations and ending with two songs associated with later Bechet.  The songs are ONCE IN A WHILE / ALLIGATOR CRAWL / SAVOY BLUES / ORIENTAL STRUT / TEXAS MOANER / DROP THAT SACK! / OLD-FASHIONED LOVE / BIG FAT MA AND SKINNY PA / PUT ‘EM DOWN BLUES / NOBODY KNOWS YOU WHEN YOU’RE DOWN AND OUT / DON’T FORGET TO MESS AROUND / PERDIDO STREET BLUES / DOWN IN HONKY TONK TOWN / STRANGE FRUIT / VIPER MAD / PETITE FLEUR.

I hadn’t heard or heard of Thomas before the 2010 festival, but Bent Persson made a special point of recommending him to me — and when Bent recommends another musician, I take it seriously.  Thomas is a superb player; like Bent, he understands not only the records but the idiom, and can nimbly become Bechet or Johnny Dodds while sounding like himself — no small accomplishment.  And the CD is a delightful representation both of the Masters and of the twenty-first century musicians doing them honor.  It’s always a pleasure to hear some of the less-recorded Hot Five and Hot Seven material, and this band is able to summon up the deep melancholy of STRANGE FRUIT as well as the jubilant elevation of VIPER MAD.

Ideally, one would buy a copy of the CD from Thomas at a gig, but for those who aren’t flying around Europe in search of the real thing, the financial details are:

You can find out more about Thomas and his friends (including his substantial discography complete with music clips) at his website, http://www.winteler-music.ch/.

Finally, some speculative etymology.  I think with affection of the Czech novelist Josef Skvorecky, who wrote in his novel THE COWARDS (or his novella THE BASS SAXOPHONE) of his difficulties with jazz-related English (he was a youthful amateur tenor player during the Second World War): encountering “Struttin’ With Some Barbecue” for the first time, he was puzzled by the word-by-word translation: could it really mean “Walking pompously with an animal carcass roasted whole”?

I have the same feelings about “Drop that sack!”  Is it really an old-time racially-based joke about chicken-stealing, or did it mean, “Let’s get out of here” or “Get rid of that unattractive person”?

It adds something to the resonance of the words that DROP THAT SACK was one of the two titles that Louis recorded “anonymously” with Lil’s Hot Shots for a competing label while he was under contract to OKeh — trying to hide Louis’s conception and sound would be like pretending the great Chicago Fire wasn’t burning . . . . but I wonder if there are hidden meanings to the expression, just as we later learned that “Struttin’ with some barbecue” was a pre-PC way of saying, “Walking proudly with my beautiful girlfriend.”

Posted in "Thanks A Million", Jazz Titans, Pay Attention!, Swing You Cats!, The Heroes Among Us, The Real Thing, The Things We Love