THEY CAN REALLY DO THAT THING, AND MORE: FLOYD DOMINO’S ALL-STARS 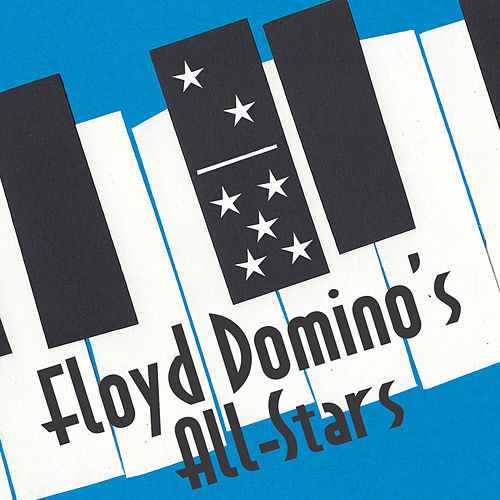 And here’s a lively audio sample:

and another, with organic Lester-and-Buck flavoring:

I know that there are many excellent small and mid-sized “swing dance” units in operation these days, and if you’ve been reading JAZZ LIVES, you’ve heard my praise of them from New York to Vancouver and Texas.  We live in an age of good music (so those who lament the death of jazz are just wrong) but Floyd’s group has that most wonderful quality, a completely recognizable sound: individuals in solo and in ensemble.  I don’t have to clamber up on my soapbox and say that “When I was a boy you could tell who someone was in four quarter notes: Frank Newton didn’t sound like Charlie Shavers,” and so on.  But you know it’s true.

Again, if you’ve been paying attention, you know these musicians — or the two videos have offered convincing evidence of why you should.  But rather than write a handful of enthusiastic character sketches, for once I want to say something about the band, which has all the glide and grit of a working unit.  Smooth, but hardly decaffeinated.  What I hear in these performances is a kind of easy rhythmic intensity — think of a Forties small unit that has understood that shuffle rhythm, never heavy or obvious, gets the dancers on the floor.  (Although RIFF BLUES and the powerful MESS AROUND are solid exceptions: house-rocking music.)

The arrangements, as well, often feature Floyd’s groovy piano, but he isn’t always all alone. Rather, in the fashion of Basie and McShann, the piano often works against horn backgrounds (although the first choruses of HONEYSUCKLE give a nice simulation of Basie-time without any of the patented cliches, and DO YOU KNOW WHAT IT MEANS starts off with a honeyed sixteen bars of piano-and-rhythm before some pretty horn solos.  For the rest, you’re on your own, with notepad and pen if you please).

This CD is a homage to the music of another age, but it’s not imitative, although I now know the new lyrics to BLUE SKIES come from Slim Gaillard and the Royal Rhythm Boys; ‘WAY DOWN YONDER bows low to the Kansas City Six.

I will break with what I wrote earlier to say that Ms. Gamble is a wow: begin with her EXACTLY LIKE YOU and AFTER YOU’VE GONE.  “Tonation and phrasing” in abundance!

The preponderance of “standard repertoire” on the disc, incidentally, should not drive any listener away.  Yes, you’ve heard TEA FOR TWO countless times, but this band makes even the most ancient song seem fresh and vivid, and, yes, that is a little cap-tip to Tatum.  I know also that the phrase “little arranging touches” is so overused that I should banish it, but in this case it’s true: the balance of ensemble and solos is so very pleasing, novel without being ostentatiously “innovative.”

How can you bring this joy into your own life?  Ideally, if you’re at one of Floyd’s gigs, bring money and buy a cluster of CDs.  The holidays are coming, and so much holiday merchandise is designed to be obsolete the next morning.  This CD won’t be.  Or visit here and spread some joy.  But don’t give all the copies away: you’ll be sorry.

All I can say — for those who get the joke — is that if this band had existed in 1947, Jack Kapp or Herman Lubinsky would have signed them to disastrously corrupt contracts and they would be absolutely legendary.  How lovely it is that they are alive and well in our own century.

Posted in "Thanks A Million", Bliss!, Generosities, Hotter Than That, Jazz Titans, Pay Attention!, Swing You Cats!, That Was Fun!, The Heroes Among Us, The Real Thing, The Things We Love, Wow!

Egged on by the inestimable Messrs. Riccardi and Hutchinson, I present my unexpurgated and hugely idiosyncratic list of the first 25 selections on my iPod, no cheating.  Readers of similar temperaments are encouraged to respond:

Blame it On the Blues, Duke Heitger’s Big Four

It’s A Sin to Tell A Lie, Humphrey Lyttelton

Walk It To Me, Hot Lips Page

Under A Texas Moon, Seger Ellis

They Say, Echoes of Swing

There’s Something In My Mind, Ruby Braff

Down By The Old Mill Stream, Benny Goodman

Take the “A” Train, Duke Ellington

Stay On the Right Side of the Road, Bing Crosby

All That Meat and No Potatoes, The Three Keys

Stompin’ at the Savoy – Fine and Dandy, Coleman Hawkins (1967 JATP with Teddy Wilson)

I’ll See You In My Dreams, Jeff Healey

Perhaps not a scientific cross-section or a scholarly sample, but those tracks — in that idiosyncratic assortment — offer great happiness.  Anyone care to join in?

Posted in "Thanks A Million", Irreplaceable, It's A Mystery, Jazz Titans, The Real Thing, The Things We Love

My iPod isn’t always a subject for philosophical contemplation.  More often it’s merely a calming talisman in my battle against airplane claustrophobia and tedium.  But recent experiences have made me think about it as more thought-provoking than a twentieth-century version of the transistor radio and cassette player of my past.

It began when I unintentionally erased not only the contents of my iPod but also my iTunes library.  How that happened is not a subject for this blog, but I erased eight thousand tracks.  (Or, to use “the male passive,” I could write “eight thousand tracks had been erased,” but no matter.)  Preparing to go off on vacation far from my CD collection, I began to stuff compact discs into my iTunes library.  This, as readers will know, is a nuisance, and at times I wished for a youthful niece or nephew to whom I could say, “Want a hundred dollars?  Put each of the CDs in that bookcase into iTunes for me, will you?”  The computer did its job well, but it required me to check on it every six or seven minutes.  I began with the tail end of my collection — that’s Lester Young, the Yerba Buena Jazz Band, Ben Webster, Lee Wiley, and so on, and worked my way back to the Allens, Harry and Henry Red, in the space of ten days.

This combination of obsessiveness and diligence resulted in an iPod with more than fifteen thousand tracks on it — the Hot Fives and Sevens, the Basie Deccas, the Lester Verves, the Billie Vocalions, the Teddy Wilson School for Pianists, the Blue Note Jazzmen, Fats Waller from 1922 to 1935, Mel Powell on Vanguard, Ruby Braff and Ellis Larkins . . . all I could desire, more than a hundred full days of music.

But I kept silently asking myself, “What do you need all this music for, knowing that you couldn’t listen to it all in the space of the next twelve months?”

Another King kept insisting that I pay attention to him.  He didn’t play cornet; he would have been out of place at the Lincoln Gardens.  I had taught a course in Shakepearian tragedy this summer, and ended it with KING LEAR — adding a few scenes from the 1982 Granada television presentation with Sir Laurence Olivier.

Early in the play, when Lear still thinks he has imperial powers (even though he has renounced the throne), he bargains with his daughters about whose house he shall stay at first, casually letting them know that he will arrive with a hundred knights.  Although Goneril and Regan are cruelly inhuman, I always feel for them at this point, as they ask their father, with some irritable reasonableness, why he, no longer King, needs a retinue.  Lear responds:

O reason not the need! Our basest beggars

Are in the poorest thing superfluous.

Man’s life is as cheap as beast’s.

In the most commonsensical way, I take these lines to suggest that the difference between a reasonably privileged person and a Maltese terrier is that the person, when the impulse strikes, can go to the kitchen cabinet and have another cookie or pretzel.  Choice is at work here, unlike the dog who has to wait for the owner to fill his bowl.  “Need” is constricting; luxury is the freedom to transcend mere needs.  Or, in other terms, to have merely “enough” — the spiritual equivalent of eight hundred calories a day — is emotionally insufficient.

I knew that I didn’t “have to have” Ella Fitzgerald singing MY MELANCHOLY BABY (Teddy Wilson, Frank Newton, Benny Morton, 1936) in the same way I need food and drink.  I could capably replay most of that performance in my mind.  But not having it accessible provokes feelings of inadequacy, of being separated from my music.  To some, this will seem like an exercise in superfluity: I know there are people in other countries who don’t have clean water, let alone alternate takes of the Albert Ammons Commodores, and I feel for them, but the sensation of having more music than I can possibly listen to is luxuriant bliss.  It means that if, upon awaking, I really NEED to hear Dicky Wells and Bill Coleman play SWEET SUE . . . there it is.

Which leads me to the most brilliant feature of the iPod — not the ability to reproduce album cover artwork (!) but the ability to shuffle songs.  I plugged it in here and started it up . . . so that Dizzy Gillespie followed Mamie Smith who followed the West Jesmond Rhythm Kings who followed Hawkins . . . . a floating Blindfold Test, full of surprises and gratifications.  And no worrying about the hundred knights drinking up all the milk in the refrigerator.

Olivier and Oliver, in perfect harmony.

Posted in "Thanks A Million", Irreplaceable, It's A Mystery, Jazz Titans, Pay Attention!, The Things We Love