Since childhood, Sonny LaRosa, trumpeter, has given himself body and soul to the music he loves and creates.  Here he is, two years ago, at 88: 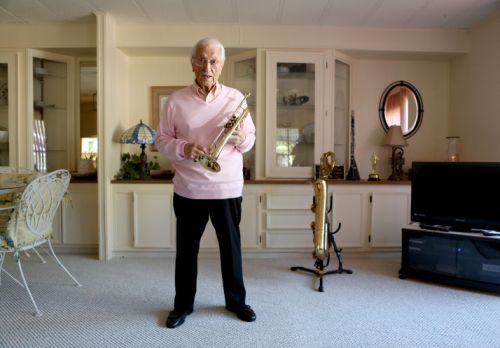 And here is the February 2015 newspaper story, how Sonny retired from 36 years of leading his own generous creation, America’s Youngest Jazz Band. But this is not a story about a frail nonaganerian.  This is not a tribute to a man who is, as they say, “resting on his morals.”  This is a salute to a glorious trumpet player . . . although he might have escaped your notice.

Sonny’s approach is a kind of trumpet playing you don’t hear often enough: a languorous, full-toned, loving approach to the melody.  He clearly is deeply affectionate: when he plays YOU GO TO MY HEAD or IMAGINATION, what you hear first is a beautiful act of reverence to the composer.  This isn’t to say that he is tied to the written manuscript.  No, he has a subtle rhythmic lilt, and when he improvises, you hear that he knows sophisticated harmonies.  Nothing’s formulaic or mechanical in his playing, and although his art is virtuosic, he doesn’t show off: no ascents into the highest register, no blurts of volume.

You wouldn’t expect anything else from a man whose father played him Louis records from age 4 onwards.  And even better — Sonny, in his early teens, met and spoke to Louis, who encouraged him and recommended a “good teacher,” who turned out to be Maurice Grupp.  Sonny had many teachers, but ultimately went his own way — away from the symphony, deep into the world of beautiful sounds.  He is one of those rare ambassadors of beauty, his music unfussy, humble, and loving.  His goal, he says, was to have “a pure dark tone,” and he’s succeeded nobly. 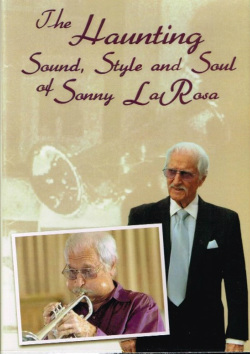 Here you can hear Sonny play ANGEL EYES from his most recent CD, which is called THE HAUNTING SOUND, STYLE AND SOUL OF SONNY LA ROSA — and that title, to me, isn’t in the least hyperbolic.  When asked about his passion, he’s said, “I like that feeling of playing like somebody would sing . . . the way Sinatra would sing a song.  God gave me the gift of sound,” and that is no boast.

The CD offers twelve lovely standards: ANGEL EYES / IMAGINATION / MISTY / JUST ONE MORE CHANCE / BY THE TIME I GET TO PHOENIX / MY FUNNY VALENTINE / I GOT IT BAD AND THAT AIN’T GOOD / YOU GO TO MY HEAD / AUTUMN IN NEW YORK / SOLITUDE / CLOSE TO YOU / Theme from LOVE STORY — and two dazzling etudes at the end, KEEL ROW, played straight, and then as a Sonny-plus-Sonny duet which swings mightily. The backgrounds are very simple; the performances are unadorned explorations of song, and most of them end with a gentle fade, as if a beautiful sailboat was drifting into the distance.

If you scroll down to the bottom of this page, you can hear a few more samples from the CD.

I have been enjoying this CD for its masterful yet quietly glowing trumpet playing — and I’ve also played it in the car for a friend who says “I don’t like jazz,” but who said, “Wow! That is gorgeous!  I like that!” so the CD works on many levels.

You can purchase the CD (and I encourage you to!) for $15, which includes postage, directly from Sonny.  Contact him here and tell him JAZZ LIVES sent you.  This world can be very dark these days.  I think of Sonny’s art as healing for our troubles.  It’s music that comes from his heart, and it will gently make its way into yours.

Posted in "Thanks A Million", Bliss!, Generosities, It's All True, Pay Attention!, The Heroes Among Us, The Real Thing, The Things We Love