THE BAND THE ANGELS HIRED FOR THEIR PROM (January 15, 1967, Carnegie Hall)

Some may read those words as blasphemy, but the music is its own divine truth.

One of John Hammond’s best ideas, and he had many, was the two FROM SPIRITUALS TO SWING concerts in 1938 and 1939: marvelous events with irreplaceable music from Benny Goodman, Sidney Bechet, James P. Johnson, Charlie Christian, Lester Young, Hot Lips Page, Ida Cox, Big Bill Broonzy, Sonny Terry, Brownie McGhee, Count Basie, and more.  The music was recorded, and even with some technical flaws, it remains monumental.  Because of Hammond’s connection with Vanguard Records, it was issued there — first a two-record set, and more recently, on CDs.  (Like most CD sets, it’s “out of print,” but you can find copies.) 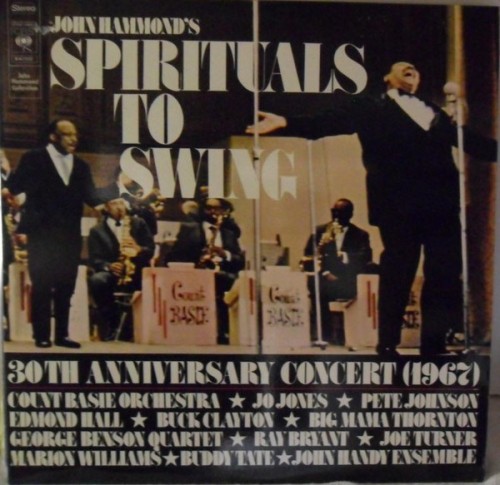 In 1967, someone had the good idea of booking Carnegie Hall for a thirtieth anniversary concert, and selections from the concert were recorded and (five years later) issued on a two-record set featuring Basie, Big Joe Turner, Big Mama Thornton, John Handy, George Benson, and Marion Williams.  I wrote on the back of my copy that I bought it at Record World, a local chain, for $5.29, on April 23, 1972.  (I no longer annotate purchases this way: life got more complicated.)  The segment I love the most has a distinct Basie flavor.

In conversation with a new erudite jazz friend, Randy Smith, I found that we both had hoped for this music to be issued on CD, but obviously the glory days of jazz reissues are gone for whatever corporate entity controls this music, and even the European issuers have not touched it.  So — since yesterday was oddly and happily quiet in my apartment building, the families and dogs elsewhere for the moment, I made a DIY transfer of the music.  There’s a certain echo-y quality, but pretend that you have been taken by magic back to Carnegie Hall on January 15, 1967, and let me — and us — have our fun.

Goddard Lieberson introduces the “Cafe Society Band,” with some rueful amusement that the crowd response to that fabled place is small (the generation that had heard Frank Newton and Billie Holiday, Teddy Wilson, and Basie there had probably stayed at home) and he stumbles over Milt Hinton’s name, but he brings on the celestial orchestra: Count Basie, piano; Buck Clayton, trumpet; Buddy Tate, tenor saxophone; Edmond Hall, clarinet; Milt Hinton, string bass; Jo Jones, drums, for SWINGIN’ THE BLUES.  I won’t explicate the delights here, but these nine minutes have been special music since 1972, and when I return to this performance I hear gratifying surprises, the hallmark of the greatest art.

The solos and ensemble interplay between Buck, Ed, and Buddy are priceless, showing that the players so brilliant in 1937 were still brilliant thirty years later, without a hint of repeating their routines.  (How DO they age so well?)  For me, though, this is a post-graduate seminar in rhythm-section playing, with each of the three “in the back” bringing so much sonic and textural variety, playing little aural games of hide-and-seek.  Basie, especially, shows once again that he was not only the master of silence, which is not a paradox, but of how to push a soloist with the right note or propulsive chord.  I think only Sidney Catlett approached his mastery in this — when to bide his time, when to create one accent that would have the effect of a “Yeah!”:

“They called him a shouter.”  Big Joe Turner, who had appeared at Hammond’s original concerts, comes onstage.  In his later years, he often appeared to be very little concerned with what verses he sang in what order (although he may have had a plan that I am not able to discern) and the result was a kind of swing autopilot, where I and others just listened to the majestic roar and holler of his voice.  But here, on a blues called (perhaps after the fact) I’M GOING AWAY TO WEAR YOU OFF MY MIND, his dramatic gift, his sadness, is lovely and powerful.  Hear how he sings his initial “Thank you,” and note the wonderful support Ray Bryant gives him, Buck’s solo, and Jo Jones’ exhortations:

Then, ROLL’EM, PETE — which Joe and Pete Johnson first recorded in 1938.  Pete Johnson had been ill, but he was at this concert.  I’ll let Dan Morgenstern, who was also there, describe the scene that you will hear, as he did in DOWN BEAT (included in Don DeMicheal’s fine liner notes):

Then, for the concert’s most moving moment, Lieberson escorted Pete Johnson on stage and introduced him as one of the participants in the original Spirituals to Swing and the greatest boogie-woogie pianist. Johnson had suffered a series of paralytic strokes and had not played piano for many years. His old buddy, Turner, took him by the hand, and for a moment the two middle-aged men looked touchingly like little boys.

Turner dedicated ROLL ‘EM PETE to his old friend, as Lieberson and Johnson were about to leave the stage. Instead, they stopped, and the pianist seated himself next to Bryant at the piano and began to play the treble part of his old showpiece, Bryant handling the bass. Johnson was a bit shaky but game, gaining in confidence as the number built in intensity:

It wasn’t 1938 any longer, but it was a damned fine evocation, with Buddy Tate at his vocal best, Edmond Hall matching him in exuberance (Hall died later that year), Buck and Jo building castles of swing as only they could:

In 2020, no one who sang or played on that stage in 1967 is around to uplift us.  (I take pleasure in knowing that Dan Morgenstern will read this post.)

But their sounds, their passion, their grace remains.

Posted in "Thanks A Million", Bliss!, Generosities, Hotter Than That, Ideal Places, Irreplaceable, It's All True, Jazz Titans, Pay Attention!, SURPRISE!, Swing You Cats!, That Was Fun!, The Real Thing, The Things We Love, Wow!

The biographies of jazz musicians often follow a predictable path, from Mother at the organ or Dad’s 78s, precocious talent, hours of rigorous training, encounters with older professionals, early gigs, and then success.  If the musician is stable and fortunate, the narrative quiets down to a series of gigs and concerts; if the subject is tragic, the pages darken: alcohol, drugs, abusive relationships, auto accident, major illness, premature death.

The jazz eminences who have written autobiographies (excepting Billie Holiday and Anita O’Day, although I am sure some readers will add to that list) have been the more fortunate ones, and their books depict elders looking back on friendships and triumphs.  Often the narrator is justly proud, and his / her singular personality is a strong consistent presence.

But this long list of names isn’t all there is to JAZZ ME BLUES (written with the very capable help of Alyn Shipton . . . Barber says in his acknowledgments that they first talked about this book in 1982) — published this year by Equinox in their Popular Music History series.

Barber follows the usual chronological path from his early encounter with jazz to becoming an international eminence. However, it took me about thirty-five pages (the book is 172 long) to settle in to JAZZ ME BLUES because of his distinctive personality.

He isn’t forceful or self-absorbed, telling us of the wonderful thing he did next. Barber comes across as a quietly modest man who has no need for us to admire him. Chronicling his life, he is so placidly matter-of-fact that it might take readers by surprise. But once we do, the absence of self-congratulation is refreshing, as if we were introduced to a very talented person who had been brought up to think self-praise was vulgar.

An interval for music.  First, STEAMBOAT BILL and HIGH SOCIETY from the Fifties:

Aside from its subject’s remarkably modest approach to his own life, JAZZ ME BLUES has two great pleasures.  One is Barber’s unwillingness to stay neatly in the style that had brought him success. Beginning in the Sixties, his band takes on different shadings while not abandoning the music he loves: he brings in electric guitarist John Slaughter, altoist Joe Harriott, organist Brian Auger; he works and records with blues and gospel legends; he plays extended compositions. Again, since Barber speaks about these events with polite restraint, one must estimate the emotional effect of being booed by British traditionalist fans who wanted “their” music to stay the same. Barber is not making changes to woo a larger audience or to stay in the public eye, but because he is genuinely interested in adding other flavorings to a familiar dish. He is a determined seeker, and he grows more intriguing in his quests.

The other pleasure I alluded to at the start, delightful first-hand anecdotes. Readers deprived of their own contact with their heroes always want to know what the great men and women were like, and JAZZ ME BLUES — although never mean-spirited in its quick sketches — is a banquet here. Not only do we hear about Sonny Boy Williamson and Zutty Singleton (the latter saying he is most happy in a band without a piano because pianists all “lose time”) but about Van Morrison, George Harrison (who likes the 1930 BARNACLE BILL THE SAILOR) and colleagues Lennon and McCartney; we read of Howlin’ Wolf saying grace quietly and sweetly before a meal. Trumpeter Ed Allen tells Barber that he always used to learn the songs for Clarence Williams record dates in the taxi on the way to the studio.

And Barber has been in the right place at the right time. When he comes to America, he sits in at Condon’s. After an uneventful beginning, “. . . suddenly the rhythm section started to swing. I looked round and Eddie had picked up his guitar and joined in. From then on, with him there, every tempo was just right, and everything swung. His presence was subtle, but it made the world of difference. I knew what a fine player he could be, as, when the band had appeared at the Royal Festival Hall in 1957. I’d gone along to their late night concert. The thing that sticks in my memory from that night was Eddie taking a half-chorus solo on a tune in the ballad medley. It was just perfect, and with the tuning of his four-string tenor guitar it had a very distinctive sound. It reminded me of Carmen Mastren, who was a true virtuoso.”

JAZZ ME BLUES is an engaging portrait of a continuing life in jazz (with rare photographs, a selective discography, and an index). It is available in North America exclusively through ISD ($34.95 hardcover): ISD, 70 Enterprise Drive, Suite 2, Bristol, CT 00610: orders@isdistribution.com.

Posted in "Thanks A Million", It's All True, Jazz Worth Reading, Pay Attention!, Swing You Cats!, That Was Fun!, The Heroes Among Us, The Real Thing, The Things We Love