Thanks to the tireless and exacting Mark Cantor, we have this 1946 Soundie of clarinetist Joe Marsala and his wife, harpist Adele Girard, performing MILLENIUM JUMP — familiar chord changes in a swinging way — with fine assistance from musicians who didn’t become famous.

All brought to you in under three minutes.  Get your change ready.  Play it again!

Be sure to visit the Facebook page devoted to Adele and Joe — surprises await here.

Posted in "Thanks A Million", Bliss!, Generosities, Jazz Titans, Swing You Cats!, That Was Fun!, The Heroes Among Us, The Real Thing, The Things We Love

It’s always fascinating to take old assumptions and hold them up to the light.  For years, I assumed along with most that the song called “SHINE,” or sometimes “S-H-I-N-E,” had disgracefully racist lyrics, and that having someone proud of his African-American heritage — such as Louis Armstrong — sing it was a deep insult.  “Poor Louis,” we thought, “forced to endure material unworthy of him, degrading to his race and self,” although he doesn’t seem abashed in what follows.

Here’s the version from RHAPSODY IN BLACK AND BLUE (with a nice close-up of drummer Tubby Hall):

And a decade or so later, a Soundie of SHINE from 1942 (with closeups of Sidney Catlett and dancer Nick Stewart):

“Those poor Mills Brothers — other singers saddled with demeaning material.”  That there seemed to be other lyrics — in Bing Crosby’s version — was puzzling, but I think many assumed that this was part of a clean-up campaign or some racist plot against people of color.

The song — as “THAT’S WHY THEY CALL ME ‘SHINE,'” dates from 1910* and was composed by Ford Dabney (music) and, more importantly, Cecil Mack (born Richard C. McPherson), both African-Americans.  That in itself wouldn’t have prevented them from creating a song that later generations would have found demeaning.  But the lyrics of “THAT’S WHY THEY CALL ME ‘SHINE'” are anything but self-deprecating.

When I was born they christened me plain Samuel Johnson Brown,

Had changed it ’round to Sambo, I was Rastus to a few,

Then Choc’late Drop was added by some others that I knew,

When someone shouted, “Fellers, hey, come on and pipe the Shine.”

Here’s how I figure it.

‘Cause my hair is curly,

‘Cause my teeth are pearly,

Just because I always wear a smile,

Just because my color’s shady,

That’s why they call me “Shine.”

A rose, they say, by any other name would smell as sweet,

So if that’s right, why should a nickname take me off my feet?

Why, ev’rything that’s precious from a gold piece to a dime

And diamonds, pearls, and rubies ain’t no good unless they shine.

So when these clever people call me “shine” or “coon” or “smoke,”

I simply smile, and smile some more, and vote them all a joke.

What is there in a name?

I think — having read these lyrics, especially the verse! — some of us might have to reconsider our perceptions of this song.  The lyrics, by the way, come from READING LYRICS, ed. Robert Gottlieb and Robert Kimball (Pantheon, 2000); they date the song as 1924.  Text courtesy of the Beloved’s bookcase.

ONCE THERE WAS A HOUSE ON FIFTY-SECOND STREET (Henry “Red” Allen, 1946)

The Soundies — a kind of early video jukebox — seem very primitive today.  Watch more than two at a time by the same band, and it’s clear they were done rapidly, cheaply, and without much emphasis on variety.  The same sets and presentation continue throughout a series,  and the musicians are clearly miming to a pre-recorded soundtrack.  But how else would we see Henry “Red” Allen and his sidekick J. C. Higginbotham in performance in 1946?

This Soundie — HOUSE ON 52nd STREET — was not intended as a follow-up to Red’s moody THERE’S A HOUSE IN HARLEM, but it seems an extension of songs like GIMME A PIGFOOT and THE JOINT IS JUMPIN’ — efforts to invent a party scene in less than three minutes.

Its rather thin melody and lyrics already must have seemed nostalgic for a scene rapidly slipping away. By 1946, I think “the Street” was in decline: the returning servicemen had already decided to take their girlfriends to the suburbs, own some lawn, raise families — and I do not scoff at these activities, for they delineate aspects of my early life . . . but domesticity meant that you didn’t stay up late listening to jazz in the city.  And then there was television, a few years later . . . 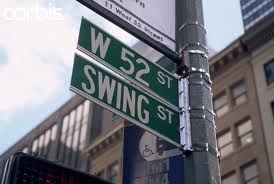 In Manhattan, I believe that the block between Sixth and Seventh Avenues on Fifty-Second Street is called SWING STREET on the green-and-white sign, but that’s possibly the only thing swinging there now.

But we can return to this invented scene — sixty-five years ago now! — and hear Red, Higgy, Don Stovall, alto; Bill Thompson, piano; Benny Moten, string bass; Alvin Burroughs, drums; Johni Weaver and Harry Turner, dancers.  And Red obviously didn’t develop his stage presence only at the Metropole: he has it here, exuberantly selling this song:

Thanks again to Franz Hoffmann for delving even deeper into his treasure-chest and letting us see and hear these prizes.

Posted in "Thanks A Million", Generosities, Irreplaceable, Jazz Titans, Pay Attention!, Swing You Cats!, The Heroes Among Us, The Real Thing, The Things We Love

William “Sonny” Greer, who played drums for Duke Ellington for nearly thirty years, never received the acknowledgment he deserves.  True, he could be more interested in decorating the ensemble than in simply driving them to the finish line.  Musicians who played with Sonny as he got older said that he was sometimes unreliable, that he drank too much.  But all those statements matter very little when measured against the musical evidence.

Today I was listening to the second half of the 1940 Fargo, North Dakota dance date.  That evening has achieved mythic status because two undergraduates recorded the music and kept the discs safe — so we can hear Ben Webster and Jimmy Blanton tenderly exploring STARDUST.  But consider “Fargo, North Dakota,” and “dance date,” both factors to be examined: a touring band played a thousand such dates, and there was no reason for the musicians to be particularly attentive on any given night.  Wintry North Dakota was far away from uptown New York in ways that transcend the distance one could measure on a map.  But Greer’s playing is simply extraordinary: the ebb and flow of the sounds he creates (he didn’t have one or two trademark patterns — think of Cozy Cole’s press roll or Jo Jones’s hi-hat).  Sonny Greer made sounds that fit what everyone else was playing — or perhaps he made the sounds that pleased him most at that split-second.  So to those listeners who are accustomed to drumming that utilizes a steady ride-cymbal beat, for instance, Greer at first sounds like an accompanist rather than a jazz drummer, echoing what the soloist is doing with a splash or an auditory comment.  But closer listening reveals that he is leading far more than following, and that the surging rhythms he creates are pushing the band.  Of course, some of what Greer was doing in 1940 got picked up by people who didn’t understand how a drummer could be playing loudly, creatively, and exuberantly — and still not overshadow the other players.  Sonny could do that, as could Sidney Catlett.

But John Hammond criticized him in print, as did others.  However, Hammond and the others always had their own ideas of what the Ellington band and other bands should sound like.  Ellington wouldn’t have kept Greer at his side for so long simply for youthful loyaty.  (Keeping Greer on salary until his death was an example of such feelings, but Ellington didn’t keep anyone in the band whose work didn’t add something — whether or not jazz critics recognized it mattered not at all.)

So I would send readers back to the Fargo concert, to ROCKIN’ IN RHYTHM and ST. LOUIS BLUES, and to the panoply of tone colors Greer adds even at slow tempos.

My friend the Jazz Sage Sam Parkins sent in this story: “One ‘once in a life-time’ jazz event: In spring of ’58 or so I was doing Yale Reunion with Eli’s Chosen Six, only 2 Yalies left (Roswell Rudd and bassist Bob Morgan). We were doing class of ’48; Sleepy Hall showed up and played awesome banjo – voice leading like a Bach chorale. In the tent next to us, some class had signed on Bud Freeman and a quintet. Now Sonny Greer was a bit of a laughing stock – drunk, didn’t play too good at best etc. Here he is on a Saturday afternoon, hadn’t had a drink yet, and I’m transfixed. Never settles down to press rolls or a steady cymbal beat like Jo Jones. He’s dancing lightly all over the kit, with clean even swing, and propelling the band out the door. Never seen anything remotely resembling it before or since. AND – the next fall there’s a typical quasi-Jazz at the Philharmonic monster rally at the Cinderella Club, incl. me – and Greer. Playing barely so-so. The jazz life.”

I have my own Sonny Greer story.  In the early Seventies he and the brilliantly eccentric pianist Brooks Kerr had a duo gig at Gregory’s, a shoebox of a club.  I took my then-girlfriend there one night.  She was a classic Irish Catholic beauty: shining dark hair, pale skin, and blue eyes.  That night she sported a fake fur coat.  Between sets, I approached Sonny and asked him if he would autograph an Ellington lp that had his picture on the cover, which he did happily.  He seemed minute and beautifully-preserved: a wonderful miniature figure of A Jazz Drummer.  But nothing got past him.  He spotted my girlfriend and locked his eyes to hers with a steady devouring stare and the quietly exuberant words, “Sonny just LOOOOOOVES YOU,” which I hear as I write this.

On the left is an Ellington 78 issued under Sonny’s name, and here’s that famous Soundie (1942) of the Ellington band performing C JAM BLUES.
The short film is called “JAM SESSION,” and its fictions are endearing: the musicians are of course performing to their own soundtrack, but it doesn’t matter.  Notice Rex Stewart pretending to unpack his cornet while Ray Nance is playing, Ben Webster rising from his lunch-counter stool, playing as he goes, Tricky Sam Nanton waggling his plunger, and Sonny — beaming at the camera in his beautiful clothing before crossing to the drums to play a wondrously showy hot solo, twirling his sticks as he goes.
“Luck always” is what Sonny wrote above his name on the cover of my record.  Clearly, he had it and shared it with us.
Something I find particularly thrilling in the online playground is that if you go to the Rutgers University Libraries website:http://newarkwww.rutgers.edu/IJS/johpaudio/SonnyGreer_audio.html
you can hear Sonny himself telling stories.  Priceless generosity on all fronts!

Posted in Jazz Titans, Swing You Cats!, The Real Thing, The Things We Love