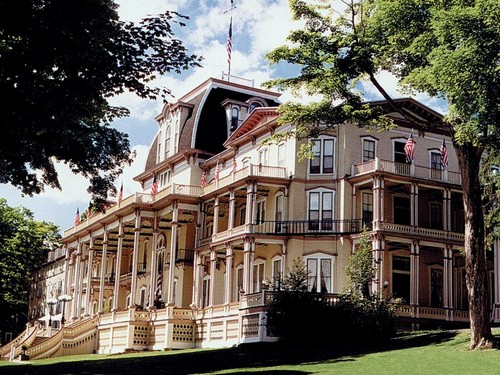 The music that follows requires some prelude.  It was created at the now-legendary Jazz at Chautauqua, almost seven years ago — which seems like several lifetimes.  The founder and imperial monarch of this jazz weekend, Joe Boughton, responsible for so many hours and days of wonderful jazz music, loathed what he thought of as overplayed repertoire.  SWEET GEORGIA BROWN was forbidden; A GARDEN IN THE RAIN was bliss.  Not for him Hot Lips Page’s ecumenical idea, “The material is immaterial.”  But, whether it was Jon-Erik Kellso’s idea or Joe’s, a set called “‘WAY DOWN YONDER IN NEW ORLEANS,” its repertoire consisting of well-worn Bourbon Street favorites, happened.  And it was wonderful.

The regular band was Pete Siers, drums; Kerry Lewis, string bass; John Sheridan, piano; Dan Block, clarinet; Bob Havens, trombone; Jon-Erik Kellso,  trumpet.  But one of Jon-Erik’s Michigander friends, the fine multi-instrumentalist — clarinet, soprano saxophone, banjo, tenor guitar and perhaps more — Tom Bogardus, was also at Chautauqua, and Jon-Erik not only invited him to join in for this set, but Howard Alden generously lent Tom his tenor banjo and Tom added so much to the sound.  He told me recently, “This was a big night in my musical career, getting to play with these outstanding musicians in today’s jazz. I am so thankful that Jon-Erik asked me and Howard Alden let me use his banjo. Now I have video proof.  It’s a 4 string tenor banjo with traditional tenor tuning. I think it’s a Bacon & Day, but am not sure.”

Before we move on to the music, a small — possibly irrelevant — personal note.  I sat at my table with my video camera on a tripod, as if it were my date, and the world of people talking, getting up for drink refills, and having dinner happily swirled around me.  So the first voice you will hear on the first video is the amiable waitperson asking me, as they are trained to do, if I was finished, “Can I take that away for you?  Are you through?” which is really, “Let me get all the dishes off the tables as we are required to do,” and my response — I am proud to say, not in a snarl, “No.”  My people have certain boundary issues: “Touch my food if I haven’t offered it to you, and I will be unhappy,” which is why I weigh more now than in 2013.  But I digress.

‘WAY DOWN YONDER IN NEW ORLEANS:

DO YOU KNOW WHAT IT MEANS TO MISS NEW ORLEANS?:

Alas, Jazz at Chautauqua and its successors, the Allegheny Jazz Party and the Cleveland Classic Jazz Party, are no more, but we have our happy memories and these videos.  Incidentally, when I asked Jon-Erik for permission to post these videos, “Happy memories!” is what he said.  So true.  Thanks to the musicians, to Joe Boughton and all his family, to Nancy Hancock Griffith and Kathy Hancock.  And to my polite waitperson: can’t forget her.

Posted in "Thanks A Million", Bliss!, Generosities, Hotter Than That, Ideal Places, Irreplaceable, It's All True, Jazz Titans, Mmmmmmmmmmmmm!, Pay Attention!, SURPRISE!, Swing You Cats!, That Was Fun!, The Heroes Among Us, The Real Thing, The Things We Love, Wow!