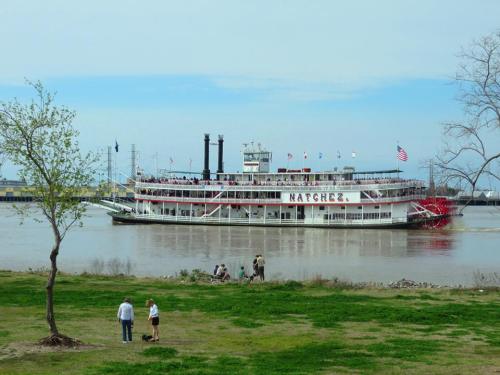 I am not sure that Ralph Waldo Emerson would have instantly taken to jazz, although its energy, self-reliant independent passion might have pleased him. But he did write these words in Nature, words I have tried to take to heart: “Life only avails, not the having lived.”  Put more simply, the experience of life is both intense and fleeting: it must be savored while it is here, not in retrospect, as if leafing through a photograph album.  Or, as Patrick Dennis’ Auntie Mame says [in the play of the same name], “Life is a banquet, and most poor sons-of-bitches are starving to death!”  (It became “suckers” in the film version, alas.)

What has all this to do with JAZZ LIVES?  It is my unsubtle way of saying that the Steamboat Stomp is once again happening in New Orleans, on the dates shown above and below, and that if you can be there, your happiness will measurably increase.  This is not an idle bit of press-agentry on my part: I was there two years ago and had a wonderful time. 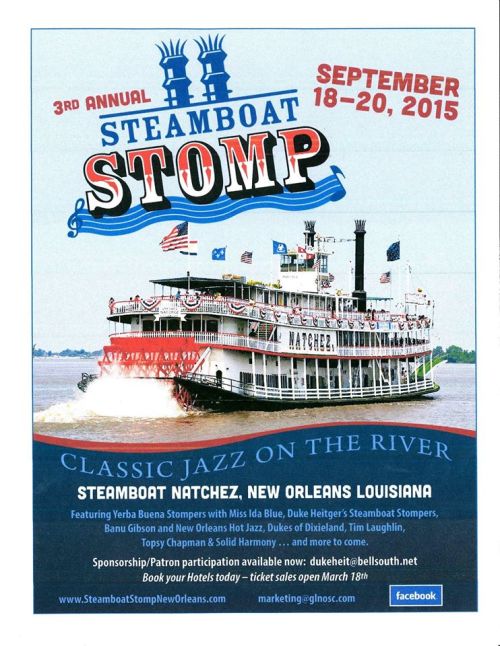 The poster tells you all you need to know, with one emendation.  The Dukes of Dixieland won’t be performing at the Stomp; instead, there will be Jacques Gauthe’s New Orleans Classic Jazz Orchestra.  AND my brilliant friends and pianists Stephanie Trick and Paolo Alderighi will be there also.

The musical festivities will begin Friday night with performances “held at a local offisite location,” which means somewhere nearby, comfortable, and on land. (Incidentally, I do not like small boats and do tend to suffer from mal-de-mer . . .  I felt fine on the Natchez.)

The main Saturday evening concerts will take place aboard a special sailing of the Steamboat Natchez. The evening will include two stages of simultaneous music along with New Orleans-style food served by the Natchez‘s own renowned chef (food not included in price).  On Sunday, a New Orleans style gospel jazz brunch (food included) will conclude the musical festivities, followed by a reception for patrons and sponsors.

Now, with all good things, a little investigation on your part is required. Emerson talked mightily of self-reliance, so one must do some legwork — or some clicking in this modern technological age. Here is the Stomp’s Facebook page.  Here you can reserve tickets and learn more.  And because — as Lester Young said in a comment I will expurgate — seeing is believing, here are a few video posts from the inaugural Stomp.  Oh what fun it was.  And will be.

If that doesn’t work, we’ll have to double the dosage of Joy.

I had a wonderful time at the inaugural Steamboat Stomp last fall — the pure pleasure of hearing hot New Orleans jazz on a steamboat cruising up and down the Mississippi River.  Mark Twain, Fate Marable, David Jones, and young Mister Armstrong all combined.

I cannot go to this year’s effusion of good times and good music (three festivals in one month is too much for me while I am attempting to hold a full-time job), so there will be an empty seat.  So I urge you to go in my place, and bring your jazz-loving friends.

Musical evidence here and here  — and there is more from the 2013 Stomp if you search JAZZ LIVES.

And here is what Duke Heitger, the generous beacon of hot jazz, has to tell us:

The second annual Steamboat Stomp is about 2 months out (November 14-16). This is a wonderful time of year to be in New Orleans, and we have added some marquee names to the already stellar roster including Evan Christopher, Jon-Erik Kellso and Hal Smith. This will surely be a weekend of great music and great fun. Weekend packages and a variety of exciting sponsorship opportunities are still available. As you know, the support and participation of folks like you are key to the success of events like Steamboat Stomp. Please visit www.steamboatstompneworleans.com for more information. If you have any questions with regards to hotels, reservations, etc… I will be happy to assist you personally at dukeheit@bellsouth.net. This promises to be a very special event. I hope to see you there!

What Duke’s letter does not say is . . . the Yerba Buena Stompers, Banu Gibson, Tim Laughlin, Topsy Chapman, Solid Harmony, the Dukes of Dixieland . . . joy-spreaders all.  Don’t let this weekend event steam right by you.

Posted in Bliss!, Generosities, Hotter Than That, Ideal Places, Irreplaceable, Jazz Titans, Pay Attention!, Swing You Cats!, The Heroes Among Us, The Real Thing, The Things We Love

The real thing — lyrical New Orleans jazz recorded on the steamboat Natchez sailing up and back the Mississippi River.  In 2013, not 1926, too.  What could be nicer?

All of this was the idea (the dream, perhaps) of our friend and hero Duke Heitger, who launched the first STEAMBOAT STOMP in October 2013.

A riverboat favorite, SAILING DOWN THE CHESAPEAKE BAY:

Duke never speaks roughly to anyone, so this traditional end-of-night New Orleans tune has to be taken as a gentle embrace rather than a rough shove out the door — GET OUT OF HERE (AND GO ON HOME):

I’ll keep you posted on the plans for the 2014 Steamboat Stomp, I promise. For the moment, admire these players: they can swing and they can float.

Posted in "Thanks A Million", Bliss!, Generosities, Hotter Than That, Ideal Places, Irreplaceable, It's All True, Jazz Titans, Pay Attention!, Swing You Cats!, That Was Fun!, The Heroes Among Us, The Real Thing, The Things We Love