One of the first musicians I met when I returned to live jazz in New York (2004-2005) was the wonderful drummer Kevin Dorn, and through Kevin I met a number of musical individualists.  One who made a powerful impression on me was saxophone master — no hyperbole here — Michael Hashim , whom I have heard over the years, memorably, on alto, tenor, and soprano.  If you’ve been on the scene since the middle Seventies, you’ve run into Michael (sometimes “Mike”) playing with everyone from Jimmy Rowles, Benny Carter, Sammy Price, the Widespread Jazz Orchestra, and now with a variety of small groups and happily with the Microscopic Septet. 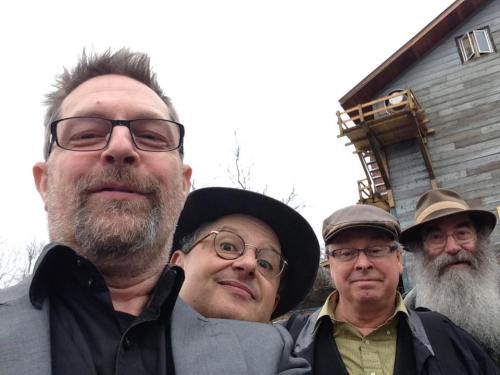 Michael is also singular because of his sharply focused memory for people and sounds and events (and, sometimes, absurdities) and his wide range of interests. I can talk with him about art, comix, photography, literature, and I will come away more deeply informed.  You will also see in these video interviews his dazzling articulateness: none of this is scripted, but he’s never at a loss for words: he’s not affected but his speech is polished and balanced.

Earlier this summer, as another tributary to the interviews I’ve been doing with Dan Morgenstern (and there are more), I casually asked Michael if he’d be interested in sitting for my camera.  He was, and so we spent a few hours on the afternoon of July 19, my admiring Michael’s insights and feeling terribly fortunate that I could record them for posterity.  And, as you can see, he enjoyed himself.

Incidentally, since I called on Michael (in the words of that venerable magazine feature by Pete Martin in The Saturday Evening Post sixty years ago) to tell us stories, to be a spiritual tour guide to worlds that many of us never encountered, I have chosen photographs of his very expressive face — without the ubiquitous saxophone attached.

Here are two of the five segments I recorded: lose yourself in Michael’s tales. They are memorable and irreplaceable, full of surprises.

First, a wonderful collection of faces and places, including — in one breath — Miles Davis and the World’s Greatest Jazz Band, memories of the great jazz film collector David Chertok, ending with words of wisdom from patriarch Jon Hendricks:

Second, recollections of Jimmy Rowles and his world:

And since Michael is music as well as words, here is a 2012 duet performance with pianist Spike Wilner of a beautiful Ellington song:

There’s more to come.  How reassuring it is to me to know that Michael Hashim exists and flourishes.