DO WHAT ORY SAY: “CREOLE TROMBONE: KID ORY AND THE EARLY YEARS OF JAZZ,” by JOHN McCUSKER

It’s always a pleasure to encounter a new jazz book that’s not a rehash of overexposed source materials or burdened by academic ideologies, and John McCusker’s fresh look at the life and music of trombonist / composer / bandleader Edward “Kid” Ory (1886-1973) is just such an engaging book. 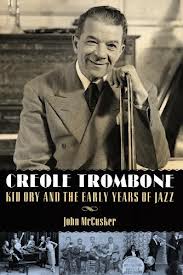 In CREOLE TROMBONE, McCusker carefully documents Ory’s roots, his development as an artist, and the scenes in which he lived and workd — not only rural Louisiana and New Orleans, but California in the early years of the twentieth century and Chicago in the Twenties.

We learn a great deal about a variety of subjects — life on a sugar cane plantation, New Orleans band battles and etiquette, early recordings and the music business.  And there are portraits, some of them from an unusual angle or an unexpected perspective, of Joe Oliver, young Louis Armstrong, Mutt Carey, Jelly Roll Morton, Freddie Keppard, Buddy Bolden, and others.

McCusker is praised for his “meticulous research” in three of the back-cover blurbs, and the book does not disappoint here.  Not only does he make use of published work by scholars including David Sager, Henry Kmen, Al Rose, and interviews with the surviving musicians held in the Hogan Jazz Archive, Tulane University, but he has spoken to Ory’s relatives and drawn liberally on Ory’s unpublished autobiography (made available to him through the generosity of Ory’s daughter Babette).  As usual, there are brief “historical” passages in which the author works to set the scene for those unfamiliar with it, and the expected use of census and baptismal records. 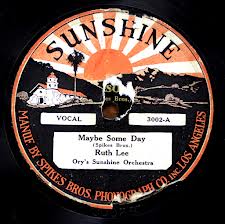 The book offers thirty pages of endnotes, contains twenty photographs of Ory, his family, and the bands — only three of which will be familiar.  CREOLE TROMBONE also reproduces lead sheets from six unpublished Ory songs — the most intriguing being MUSSOLINI CARRIES THE DRUM FOR HITLER and DON’T FORGET THE SANTA FE TRAIN AND BUS.  (Do I hear a CD project, “The Unrecorded Kid Ory,” in the works?)

I came away from the book with an increased awareness of and respect for Ory — not only as independent and ambitious, but someone with a keen eye for making his musical activities pay off.  I was struck by Ory the entrepreneur (circa 1912-13) who not only booked his own dances — arranging for his band to play in a hall he had rented — but because he was worried about competition, paying to rent a hall two blocks away and keep it dark that night.

The most animated parts of the book, of course, are the first-hand recollections of the musicians: a leisurely word-picture of the worst place Ory ever played, Spano’s, that catered to prostitutes and “freakish” men and women; his depiction of life in a Storyville brothel, where a customer who hung his trousers over a chair would find himself wishing he had been more cautious.  McCusker’s research delves into the musical communication between more formal ragtime-dance music and hotter jazz, between Ory and his colleagues and the Original Dixieland Jazz Band.  Ory and Joe Oliver were advertising their band as playing “Jazz” as early as November 1917; in 1922, “Ory’s Sunshine Orchestra” was broadcasting on the radio in California.

McCusker is by profession a photographer and journalist, someone obviously wanting to add to the record and to make it accurate, so that Ory would not be overshadowed, forgotten, or ignored — very good reasons to research and write a book.  McCusker clearly admires Ory but the book is not worshipful.  His writing is lively and the book moves quickly; although he relies greatly on sources, it does not resemble an academic thesis.

Because McCusker sees Ory as a seriously influential figure, I was not surprised to find a great deal of study devoted to the years before Ory made his first recordings in 1922.  Ory’s musical career continued until 1933 or so, then — after a decade of non-musical work) it resumed for nearly two decades.  But CREOLE TROMBONE covers the years from 1943 to Ory’s death in a few quick pages.

Had Ory retreated into an old man’s obscurity, I could understand this, but in that period Ory made more than two-thirds of his recordings, many for major labels (Columbia, Decca, Victor, and the Norman Granz conglomerate) toured Europe several times — and was more popular than ever before.

Since I first encountered Ory’s music in this period — as a member of a 1946 Armstrong group and on two Verve recordings that paired him effectively with Henry “Red” Allen, I find the omission curious, and the book feels to me hurried or deflating.  This could have been an economic decision (a press choosing a manuscript of X words only and its author deciding to concentrate on the less explored early period), but the last pages of this otherwise rewarding book feel truncated.

But here’s my offering to make up for it:

Another view of the authorship of MUSKRAT RAMBLE from Louis himself — twice (thanks to Ricky Riccardi) — here.  Who knew that fried muskrat had such powers?

Posted in "Thanks A Million", Hotter Than That, Jazz Worth Reading, Pay Attention!, Swing You Cats!, The Real Thing