QUIETLY SPECTACULAR: “NICE WORK IF YOU CAN GET IT”: MARK LOPEMAN’S DEBUT CD 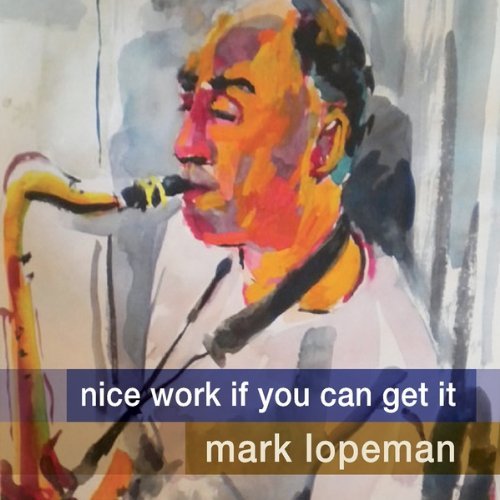 If you’ve been following the New York City jazz scene, you’ll know Mark Lopeman — a master saxophonist who’s been an invaluable addition to many bands for the past few decades.  Mark has just released his first CD under his own name, and it’s wonderful.

But if you’ve never heard or heard of Mark Lopeman (which I could understand) a few words might be in order.  Mark is another one of those people who proved F. Scott Fitzgerald wrong — not only are there second acts in American lives, but the plays we write and act in go seamlessly on without intermissions or other arbitrary divisions.  Mark is now in his early fifties, but this is no middle-aged man’s self-indulgent effort.  Rather it is beautiful music throughout — no pretenses, nothing antiquarian or postmodernist.  It is lively and fresh (locally sourced and organic, too), yet not a familiar running-through-an-hour-of-tried-and-true.  Readers of a certain age will know what I mean when I say it reminds me very happily of an imagined session for the Prestige-Swingville label, in better sound.  Mark and his colleagues know how to hit a variety of grooves, but the music never pokes a listener in the ribs and says, “Gee, look at how funky we are!”

Rather than retell Mark’s biography, I would direct you to his site — where the tale, involving the circus, a traffic ticket, Gerry Mulligan, and other notables, can be found here

I would offer my own narrow version of the Mark Lopeman saga.  When I first began to haunt New York jazz clubs, I heard Mark as a member of Vince Giordano’s Nighthawks, someone who could work his way through the reeds without fear.  He swung hard, never missed a turn, and when it came to his feature number — a transcription of the 1939 Hawkins BODY AND SOUL — he played it with accuracy and fervor, but I could hear his personality peeking out through the transcribed notes.  Then I had the good fortune to hear him as a guest EarRegular at The Ear Inn with Jon-Erik Kellso and Matt Munisteri.  To use the ancient locution, I flipped.  He swung, he soared; he was lyrical, witty, and to the point.  Ruby Braff had originally wanted to play the tenor saxophone; had he gotten his wish, he would have sounded like Mark Lopeman: wearing his heart on his sleeve but never getting in anyone’s way.

Mark is also one of those players who has thoroughly absorbed the tradition but has managed to bob along on the waves, remaining true to himself.  So a tenor aficionado will hear affectionate side-glances of Charlie Rouse and Al Cohn, Lucky Thompson and Stan Getz, but Mark is not one of those Real Book / play-along creations who coast from one learned phrase to another.  He is himself, and what a good thing that is!

Back to our story.  When I meet an artist I admire, I am not subtle or restrained in saying so.  After the first EarRegulars experience, I think I buttonholed Mark and said, “Wow, you play beautifully!  Have you got a CD of your own?”  And he looked a bit shy and said he hadn’t.  Later on, either at Sofia’s or The Ear Inn, I met his wife, the artist Susan Manley, and said (once again subtly), “Damnit, he plays so well.  When the hell is he going to make a CD of his own?”  And she agreed with me.  I can’t take any credit for helping NICE WORK IF YOU CAN GET IT see the light of day, but I would like to think that my nagging had a point: if there were enough annoying people hanging around the Lopemans making this pesky request, perhaps the CD emerged in some small part to get us to be quiet.  Maybe?

Would you like to hear some of the music?  I thought so.  Here are a whole raft of thirty-second snippets, enough to give you a sense of the CD’s candor and variety.  Click here

You can read all about the genesis of the music in Bill Kirschner’s perceptive, concise liner notes, but I would add a few things.  Mark is joined in his lyrical efforts by a splendid rhythm section of Ted Rosenthal, piano; Nicki Parrott, string bass; Tim Horner, drums.  He plays not only tenor saxophone but soprano and clarinet, and about half of the CD is illuminated by the presence of Brandon Lee on trumpet and fluegelhorn and Noah Bless on trombone — both players who know their stuff without cliche.  The repertoire is deliciously varied — from a trotting I’M ALWAYS CHASING RAINBOWS that begins and ends with a hilariously swinging Rosenthal-plays-Chopin, to the title tune, with hints of Charlie Rouse and Monk, a hip-swinging MY KIND OF GIRL (several selections have their roots in Mr. Sinatra’s repertoire), and two very intriguing Lopeman originals, WORLD ECONOMY BLUES (a collaboration with saxophonist Chris Byars) and INTENTIONS — which also feature fascinating scoring by their composer.  My absolute favorites on this disc are two Lopeman – Rosenthal duets, EVERYTHING HAPPENS TO ME (which keeps its yearning quality without any of the self-conscious pathos this song often encourages) and the heartbreaking I’M A FOOL TO WANT YOU.  (Jonathan Schwartz would love them: I hope he gets his own copy.)

I worry that JAZZ LIVES readers will think I am always tugging at their collective sleeves (and credit cards) saying “Buy this!  Buy this!”  But this CD is quietly spectacular.  Nice work indeed, Mark — and how lucky we are that we can indeed get it.

P.S.  The cover portrait is a family affair — a watercolor done with wit and affection by Rosie Lopeman . . . another artist in the house!

Posted in "Thanks A Million", Generosities, Irreplaceable, Jazz Titans, Pay Attention!, Swing You Cats!, The Heroes Among Us, The Real Thing, The Things We Love, Wow!