I had not known much about baritone saxophonist / composer Pepper Adams before a friend lent me a copy of Gary Carner’s book on him (now in paperback from Scarecrow Press) but I commend both Pepper and the book to you. 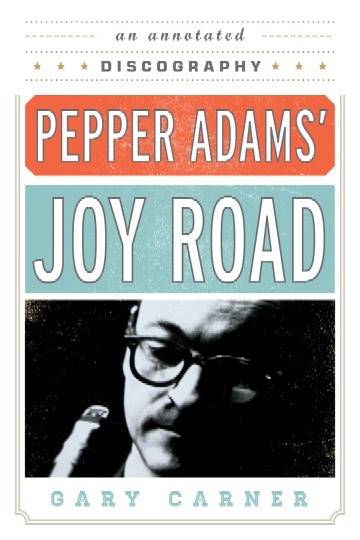 First, some music — an excerpt from an uptempo STRAIGHT, NO CHASER with Clark Terry, recorded in 1978:

The book is well-researched, rather than opinion.  Not only did its author speak with Pepper and JOY ROAD is introduced by the eminent Dan Morgenstern, but no other book I know has enthusiastic blurbs from both Phil Woods (alto) and Philip Levine (poetry).

JOY ROAD is an annotated discography.  To those not deeply involved in the music, such a work may seem a collection of marginally-useful pieces of arcane information, suitable only to those strange creatures, “record collectors,” concerned with whether that Charlie Parker solo recorded on a cardboard disc was issued on a Bolivian compact disc. I am exaggerating, but not that much.

But as an annotated bibliography would tell us a great deal about the artistic life of a writer and her relations with the marketplace, an annotated listing of a musician’s recordings would map an artistic journey. The book does not purport to be a biography — Carner is working on one now and hopes it will be finished by Adams’ centennial — but it is full of information about Adams’ life and music from 1947 to his death in 1986.  And that information is more than listings of songs, original compositions, recording data, issued or unissued performances. What makes Carner’s book more than a useful reference work is the interviews he conducted with Pepper and the people who knew and worked with him.

When I received a copy of JOY ROAD, I opened it at random, out of curiosity. I had not been terribly involved in Adams’ work — coming from a long immersion in Harry Carney and Ernie Caceres, among others.  But I stood in the middle of the living room, reading eagerly for a half hour, before remembering that a) I could sit down, and b) other tasks had to be taken care of.  If a book can “stop me in my tracks,” it is one I will read, keep, and value.

Many jazz musicians, so eloquent as creators, grow reticent when asked to speak about their art and their colleagues.  Much of what is published as treasured narrative is frankly insubstantial: “Oh, she liked her drink after the set was through!” “Did I ever tell you the story of X at the diner and what he said to the waiter?” “Y couldn’t stand Z, and always called Z names, but when they got on the stand, they blew!” If we didn’t feel that our heroes were so precious that any scrap of anecdotage, no matter how thin, brought us a step closer, no one would retell such stories. But JOY ROAD is not a collection of shards and detritus important only because they connect with someone we value. Carner’s musicians have been unsually articulate, and their stories have shape and heft.

We read about a bizarre and satisfying gig (even televised) where Pepper, David Amram, and Elvin Jones played at a Horn and Hardart automat in midtown Manhattan; Hank Jones tells Carner, “I never felt I was up to his standards, to tell you the truth.  I was reaching to play along with him”; we learn of Adams’ early work with Stan Kenton, Benny Goodman, Maynard Ferguson, Lionel Hampton, Woody Herman; encounters with Alfred Lion, Joihn Hammond, and Rudy Van Gelder; concert performances with Mingus and Monk; encounters with younger European musicians and elders of the tribe including Fess Williams, Cozy Cole, Joe Wilder, Benny Carter, Milt Hinton; the birth and development of the Thad Jones – Mel Lewis Orchestra; an informal session in Eugene H. Smith’s loft with Adams playing piano to Zoot Sims’ tenor; recordings with Donald Byrd, Oliver Nelson, Duke Pearson, Blue Mitchell, Jimmy Rowles, Joshua Breakstone, and a hundred other notables.

Equally intriguing are glimpses into the life of a valued New York session player, for Adams was understandably in-demand for pop recordings, often as an uncredited member of the ensemble, with Aretha Franklin, Dakota Staton, Sonny and Cher, The Cowsills, The Nice, The Rascals, Brook Benton, Jon Lucien, Esther Phillips, film soundtracks, industrial films, and more.

Ultimately, JOY ROAD did a number of things for me, even though my first reading of this 550-plus page book was of necessity quick rather than deep. I found recordings I’d known nothing about — Carner has had access to Adams’ personal appointment book, and has spoken with more than a hundred musicians. But more than that, I have a sense of Adams as an individual — reading Dostoevsky, listening to Berg, encouraging younger musicians, fierce when he felt unjustly treated — and I look forward to the biography, which Carner is tentatively calling In Love with Night.

I will close with my single Pepper Adams sighting. In 1972, several friends and I followed Ruby Braff to gigs.  Although Ruby was unpredictable and unreasonably given to rage, he was always pleasant to us and allowed us to tape-record him. On July 19 of that year, my friend Stu and I came to the Half Note to record Ruby with the Welsh pianist Dill Jones, bassist George Mraz (then working with Pepper in the Thad Jones – Mel Lewis ensemble, and Dottie Dodgion on drums.  About two -thirds through the evening, where the music had been very sweet, with Ruby’s characteristic leaps through the repertoire of Louis, Duke, and Billie, a tall man ascended the stand with a baritone saxophone, was greeted warmly by the players, and the quintet launched into an extended blues in Ab.  I remember Dottie Dodgion being particularly enthusiastic about the unnamed musician’s playing, who packed his horn and went off into the warm Greenwich Village night.  Who was that unmasked man?  The subject of Carner’s book, and yes, the tape exists, although not in my possession.

Posted in "Thanks A Million", Generosities, It's All True, Jazz Titans, Jazz Worth Reading, The Heroes Among Us, The Real Thing