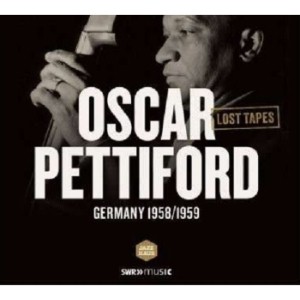 Bassist, cellist, and composer Oscar Pettiford is in the odd position of being both legendary and forgotten (as Whitney Balliett wrote of Pee Wee Russell). If you ask any aficionado of jazz string bass playing to name a dozen favorites — living and dead — it’s likely that the names will come easily.  But Pettiford’s is often not among them.

This suggests that Oscar’s peers respected him and called him for gigs and recordings.  It’s not as if he was obscure: his career was longer than, say, Blanton’s or Steve Brown’s.  But, oddly for jazz, which loves to mythologize the musicians who die young and abruptly (and Pettiford died as the result of a 1960 automobile accident) he hasn’t received the benefit of the weird reverence fans and writers have for the young dead.

Of course, it could be that bass players don’t get the respect they and their instruments deserve, but it is and was hard to ignore Pettiford on a session. He offered a rhythmic foundation that was powerful rather than obtrusive, but when he soloed, his lines have the solid eloquence that any horn player would aspire to — while seeming light rather than ponderous.  And as the list of players above suggests, his musical range was exceedingly broad: he wasn’t captured on record in free jazz or ragtime, but he elevated every other variety of jazz and jazz vocal performance he was part of.  Had he lived longer, he might have enjoyed the visibility of a Milt Hinton or a Ray Brown, but we have only brief moments of him on film (the 1945 THE CRIMSON CANARY) and a few seconds of his speaking voice.

Surely he should be better known.

Enough words and keystrokes for the moment: listen to his 1960 feature on WILLOW WEEP FOR ME:

and here he is, playing his own BLUES IN THE CLOSET — from a little-known 1953 television broadcast — on cello (which he took to for a time after breaking an arm in a baseball game):

And his stirring solo on STARDUST:

Now, two pieces of good news that might go some distance in making Oscar’s name and music known to a larger audience.  One is that there is a YouTube channel, PettifordJazz, with sixty videos of Pettiford solos, ensembles, and compositions.  That means that no one has to start collecting Oscar’s music — it is being made available to all for free.

Oscar (or “O.P.”, as his colleagues called him) also spent the last two years of his life in Europe (mostly in Scandinavia and Germany), and recorded often there.  Sessions with guitarist Attila Zoller have been issued and reissued on a variety of labels (in the vinyl era, they appeared on Black Lion) and a famous 1960 concert in Essen with Bud Powell, Kenny Clarke, and Coleman Hawkins was available forty years ago.  Recordings made in 1958-59 for the German radio network have now been issued for the first time on compact disc, in beautiful sound, as OSCAR PETTIFORD: LOST TAPES — GERMANY 1958 / 1959, on SWR Music.

American expatriates Lucky Thompson (on soprano sax for a gorgeous, melancholy SOPHISTICATED LADY) and Kenny Clarke (drums on the final five performances of the disc) are the “stars,” but Zoller stands out as a beautifully measured guitarist. 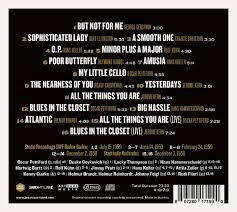 And although some US critics of the time might have been condescending to European players, this disc shows their equal mastery. Trumpeter Dusko Goykovich duets with Oscar on the opening BUT NOT FOR ME.  Other notable players here are clarinetist Rolf Kuhn; light-toned tenorist Hans Koller; baritone saxophonists Helmut Brandt, Helmut Reinhardt, Johnny Feigl; altoist Rudi Feigl; guitarist Hans Hammerschmid; drummers Jimmy Pratt and Hartwig Bartz.  The songs are a mix of standards and originals: BUT NOT FOR ME / SOPHISTICATED LADY / A SMOOTH ONE / O.P. (Hans Koller) / MINOR PLUS A MAJOR (Kuhn) / POOR BUTTERFLY / ANUSIA (Hans Koller) / MY LITTLE CELLO (Pettiford) / THE NEARNESS OF YOU / YESTERDAYS / ALL THE THINGS YOU ARE / BLUES IN THE CLOSET (Pettiford) / BIG HASSLE (Hammerschmidt) / ATLANTIC (Helmut Brandt) / ALL THE THINGS YOU ARE / BLUES IN THE CLOSET — the last two are live performances.

Ultimately, I think if you’d asked Coleman Hawkins, Duke Ellington, or any number of jazz luminaries, “What about this O.P. fellow?  Should I listen to him?” the answer would have been a very strong affirmative.  So let us do just that. These tapes were lost, but have been found: spread the word about Oscar.  Remind those who have forgotten; introduce those who never knew.  “Learn it to the younguns!” as the youthful protagonist of Ellison’s INVISIBLE MAN hears at the start of that novel.

Posted in "Thanks A Million", Awful Sad, Bliss!, Generosities, Jazz Titans, Pay Attention!, Swing You Cats!, The Heroes Among Us, The Real Thing, The Things We Love