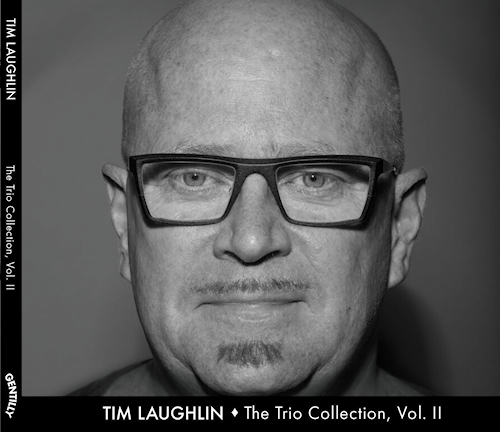 Simply stated, this is a second disc (recorded on February 7-8 of this year) by one of the world’s most satisfying jazz trios: Tim Laughlin, clarinet (and a few originals); David Boeddinghaus, piano; Hal Smith, drums.  Volume Two, logically, is the successor to Volume One, issued three years ago.  I loved the first one and said so here.

But a New York winter has been very hard on my adjective hoard, so I called upon two of the musicians to help me out — fellows who can write as well as play. (David, terribly articulate, was otherwise occupied.)

I went deeply into the Obvious and asked Tim about the arresting cover, and he said, “I ran out of pictures of steamboats and wrought iron. I have new frames for my glasses and decided to grow a pencil-thin to complete the caricature.” And we agreed that “iconic black and white” really stands out, which is what you want from multi-tasking easily distracted (my words, not Tim’s) music purchasers.

Then I thought I’d ask another member of the trio for his thoughts, and the logical choice was Hal Smith, jazz scholar and former journalism major (if we want to go back a piece):

“It amazes me that Tim continues to come up with outstanding original material — especially ‘Gert Town’ and ‘Roundabout,’ which refer to an area of New Orleans and a traffic circle, respectively.  Tim has a genuine NEW ORLEANS sound on clarinet; rich and woody in all registers. He also has a natural swing in his playing that is infectious (especially for his accompanists)!  David’s playing encompasses many of the best traditions of Classic Jazz and Swing piano — Morton, Waller, Hines, Sullivan, Wilson — but it always comes out sounding like Boeddinghaus. That’s the way piano was meant to be played!  Drumming with these guys is as easy and pleasurable as putting on slippers and settling into the recliner with a good book, an adult beverage and a black cat.”

“Easy and pleasurable” nicely characterizes the comfort this CD offers us.  It’s miles away from EASY LISTENING, but there’s no strain, no chasing after crowd-pleasing effects.  Melody, rhythm, subtle harmonies, all combine in performances that are both logical and warmly inviting.

More about the repertoire, and the sound.  The familiar songs are presented with their rarely-played verses, which are wonderful surprises in a few instances: THANKS A MILLION, ALL BY MYSELF, CABIN IN THE SKY (a small poignant masterpiece), LA VIE EN ROSE, I’VE GOT A FEELING I’M FALLING, UP A LAZY RIVER.  Then, some hot classics: WOLVERINE BLUES and PONCHARTRAIN BLUES for Mister Morton, MESSIN’ AROUND, and THERE’S YES, YES IN YOUR EYES — which has a surprise at its center, and an arrangement credit for Dan Barrett.  (Extra credit for those who know which Arbors Records session this one came from.)  Then Tim has contributed two of his own, ROUNDABOUT — where the reference is to rapid-fire playfulness in the band as well as the traffic circle — and GERT TOWN BLUES, named for a New Orleans neighborhood that is explained more fully here.

The sound of this disc deserves its own paragraph, at least.  Thanks to Ben Lario, recording engineer, and David Farrell, mastering, this is one of the most authentic-sounding CDs I’ve heard.  I  have to preface this by saying I’ve heard the three members of the trio in a variety of settings, with David’s piano and Hal’s drums the least victimized by amplification, but often I have been seated at a distance from those instruments in a large hall.  Even in small venues, the sound is compromised by people gently moving or rattling paper.  Tim’s clarinet, its sound so delicious, I’ve heard out-of-doors or again through amplification for the most part.  (And when I’ve video-recorded these players, the sound of my videos, even through a good microphone, is at some distance from the real thing.)  This CD sounds gorgeously authentic, as if I were seated in front of the trio in a moderate-sized living room.  Nothing harsh or shrill, nothing unnatural, and the balance between the three instruments is as fine as I would hear in life.

You can hear samples and buy the disc here or download the music here.

Posted in "Thanks A Million", Bliss!, Generosities, Hotter Than That, Irreplaceable, Jazz Titans, Pay Attention!, Swing You Cats!, That Was Fun!, The Heroes Among Us, The Real Thing, The Things We Love