What’s the rush?  Where’s the fire?  To what are we racing?

I see people in gas station and grocery store lines who act as if they have the most important business to get to, and surely some of them do.  But they look furious, impatient.  They are shifting from foot to foot, checking their watches, astonished at those turtles in front of them who are blocking their clear path to the Egress.  Are they their own ambulances?

So much of our culture is based on Saving Time.  Doing Things Faster.  Being More Efficient.  Multi-tasking.  If you save three seconds here and two minutes there, it must be a great satisfaction.  But where do those moments go?  I dread the thought that the people racing around will have much more time to spend in some unhappy place, like the intensive care ward.

And occasionally the people whose pants seem to be afire are rude, heedless, self-destructive.  If you rush through a task, will it be done well?  Is the world a microwave oven?  Will the young man who roared out of the gas station this morning get home safely?  I pray that he does.

For years, I have been quoting my favorite-title-of-a-record-I-have-never-heard to people.  It was a Decca “Sepia Series” side (we know what that means) circa 1941-2.  The band?  Doctor Sausage and his Five Pork Chops. The composition?  TAKE IT EASY, GREASY (YOU STILL GOT A LONG WAY TO SLIDE).

Words to live by.

But the greasiness of that composition might seem repellent.  How about making a commitment to live your life in Count Basie time?  As fast as the tempo gets, Basie never seems to rush.  He’s never hurried.  He has a goal, but he knows that breathing steadily will get him and us there just the same.

And Lester Young knew that hurry was a truly bad idea, too.  Try taking it easy and see if your slide through life is less arduous.

Posted in Awful Sad, Irreplaceable, It's A Mystery, Jazz Titans, Pay Attention!, Swing You Cats!, The Real Thing, The Things We Love

A few weeks ago, a young couple came to my apartment to buy a piece of furniture I’d hardly used.  (Now there’s more space for dancing.)  The young woman earnestly asked me about turntables — thinking of being able to play her mother’s beloved 1970 record collection.  I showed her both a modern one (and played her a track from a Marty Grosz Stomp Off record, which absolutely floored her with its bounce and warm sound).

Then I decided to become a true eccentric, a genuine suburban antiquarian and descended even deeper into history by playing her a 78 (Keynote, J.C. Heard, ALL MY LIFE) on another turntable.

I don’t think this was a transformational experience for her (and her boyfriend was pleasantly impassive through the whole thing) but it was clear she had never seen anything like it.

“How do you know where to put that thing [the stylus]?”  “What happens when it comes to the end?”  “Is that sound [the surface noise] part of the thing, the record?”  “Does that have only one song?”  And so on.

I don’t want to rehearse the discussion of iPod and MP3 downloads / compact discs / vinyl records / 78s / live performance — too many acres to plow! — but I did revert to my childhood in two sweetly nostalgic acts this morning.

One, I played a 78 record — LOW DOWN DIRTY SHAME / SOLITUDE (Vocalion 5531, rim chip, V) by Joe Sullivan and his Cafe Society Orchestra.  Lovely.  Two, I stared at the revolving disc and the diminishing circles described by the needle as the music came out of the speaker.

And I thought, not for the first time, of the beautiful paradoxes.

When the needle is lowered into the first groove, listeners enter into that musical world — new or familiar.  All experience lies before us, all possibility!  (Jack Purvis might explode in the last chorus.)  But we are always conscious of the finite limits of that world.  Listening to a live performance, we can tell when the band is near the end — although there always might be two more choruses!  A record, a disc lying on the platter, is visually bounded — its beginning and end marked out for us to see.

So as the needle follows its path, I feel the joy of hearing what’s there, perhaps the anticipatory sensation of “I can’t wait for the good part that I know is coming,” yet there’s the sad awareness of knowing the end is near.  Another sixteen bars, another thirty seconds, perhaps another two inches of black grooves.  “Oh, no, it’s going to be over!”

Everything comes to an end, we know.

But with records we have the wonderful opportunity to pick up the needle from its mindless elliptical orbits in the run-off groove and have the experience again.  Imagine being able to eat another meal in the same restaurant without monotony, without satiety.  It’s not the first kiss repeated, of course.  But second and third kisses are seriously pleasurable, too.

For those who cannot play a record today, I offer a video simulacrum — I think of it as a natural antidepressant, with no side effects:

Posted in "Thanks A Million", Irreplaceable, It's A Mystery, Jazz Titans, Pay Attention!, Swing You Cats!, The Real Thing, The Things We Love

I tried to tell Betty Sue that she didn’t need to place herself so firmly in front of her radio — it’s only Wednesday — but she said indignantly, “Don’t you know that Jon-Erik is going to be on WBGO-FM this Sunday at 11 PM?  I’m just getting ready.  I need to get a good seat, you know.”

Perhaps I should explain.  If you’ve been reading this blog and are saying “Jon-Erik who?” then you have failed the Reading Comprehension section of the examination.

That’s Jon-Erik Kellso, the Michigander Prince of Growl, who regularly leads the troops with intelligence, wit, and passion whenever he unpacks his Puje trumpet. 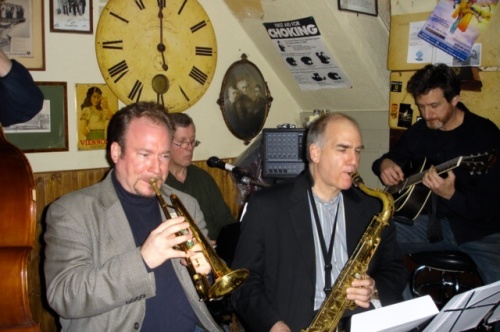 Jon-Erik will be both co-host and subject of the venerable and wonderful program JAZZ FROM THE ARCHIVES from 11 PM to midnight this coming Sunday, February 1, on WBGO-FM (88.3 on your dial).  For those of you beyond the reach of the radio signal, I understand that the program can be heard — in real time — through the station’s website:   http://www.wbgo.org/

Jon-Erik is someone much loved by listeners and his colleagues, but he hasn’t made the cover of TIME just yet, and he missed out on having Gjon Mili take his picture with Lips, Mezz, Dizzy, and Duke, alas.  So I urge all of you to listen.  He’ll be seated next to Dan Morgenstern (someone who needs no introduction if you love this music) and they will talk and play some of Jon-Erik’s own recordings and some that have pleased and inspired him.

Honoring jazz musicians on the radio is not an everyday affair, and honoring a living jazz musician is even more pleasantly unusual.  So do remember to tune in!  They tell me that there’s something going on earlier in the day that calls for beverages and snacks: a group of men do something with a ball, but that remains a mystery.  Save your energies for 11 PM.

And you might want to stake out a comfortable chair near the speaker for yourself.  It really is getting crowded in here.  Who are these people?  Did I invite any of them? 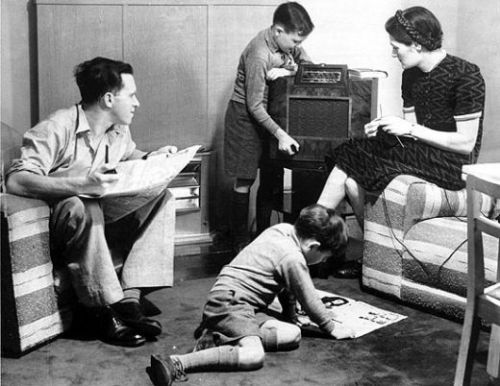 Posted in Pay Attention!, The Heroes Among Us