Buzzy Drootin was a superb jazz drummer, hardly remembered today except by the few who know their history and listen deeply.  He became a jazz musician in an era when musicians were proud of being instantly recognizable, and Buzzy was all that: hear four bars of him, in solo or ensemble, and one could tell it wasn’t George (Wettling) or Cliff (Leeman) or Gus (Johnson) or a dozen others.  His beat was steady; he wasn’t afraid to propel the band through his singular combination of time-keeping on the cymbal (ride or with rivets), snare-drum accents, and bass-drum explosions.  I never saw him play a hi-hat or brushes: he was content with his own style, which would fit with any kind of enthusiastic band.  (I can easily imagine him playing behind Dizzy as he played behind Bechet.)  You knew he was there, and his presence was both reassuring and exultant.  And he reminds me greatly of Sidney Catlett in the way his accents become a thrilling series of “Hooray!”s behind a soloist or in a rideout.

Although he was typecast as a traditional jazz musician, his work paralleled the orchestral concept of the younger “modern” musicians — a kind of oceanic commentary — and although the story may be apocryphal, I have read somewhere that Lester Young said Buzzy was his favorite drummer.  And the irascible Ruby Braff used Buzzy as often as he could.

I presume he got his nickname for the throaty roar he emitted when soloing or during exciting ensemble passages.  He was clearly having the time of his life; he didn’t coast or look bored.  (I saw him often in 1972, and because I was shy, and a criminal with a cassette recorder, I never approached him to thank him, which I regret.)

Once, jazz musicians were once accepted as part of the larger fabric of the entertainment industry; Buzzy was well-known in Boston and New York, so that when he died in 2000, the New York Times ran a substantial obituary:

Mr. Drootin’s family left Russia for the United States when he was 5, settling in Boston. His father was a clarinetist, and two of his brothers were also musicians. He began playing the drums as a teenager, earning money in a local bar, and by 1940 he was touring with the Jess Stacy All-Stars, a band that included Buck Clayton and Lee Wiley.  {Editor’s note: That date is incorrect: it would have been later in that decade; Buzzy’s first audibly documented appearances were with the Max Kaminsky – Pee Wee Russell – Brad Gowans – Teddy Roy – John Field band that played the Copley Terrace in 1945.}

From 1947 to 1951 he was the house drummer at Eddie Condon’s in New York. He also worked in clubs in Chicago and Boston, playing with musicians like Wingy Manone, Jimmy McPartland and Doc Cheatham. He made recordings in the 1950’s and 60’s with Tommy Dorsey, Bobby Hackett and the Dukes of Dixieland and played with the Dixieland All-Stars, the Jazz Giants and the Newport All-Stars, among other groups, while touring extensively in the United States and Europe.

Mr. Drootin returned to Boston in 1973 and formed the Drootin Brothers Jazz Band, with his brother Al, who survives him. In the 1980’s he appeared at the Los Angeles Classic Jazz Festival, backing up musicians like Wild Bill Davison and Chuck Hedges.

In addition to his brother Al, he is survived by a daughter, Natasha; two sons, Peter and Tony; and two other brothers, Louie and Max. 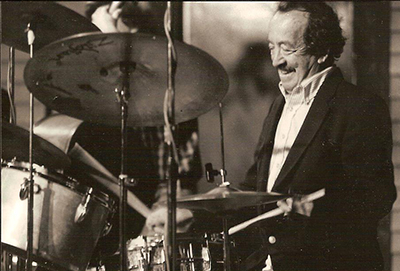 But Buzzy deserves more than a reprinted obituary, because he was often the most lively, vibrating member of the band.  A friend passed on to me — and I can share with you — a seventy-five minute videotape of Buzzy and friends doing what they did regularly and splendidly for forty years and more.  The friends are, in most cases, much better known that Buzzy, but his majestic propulsion is delightfully in evidence in every phrase — as is his grinning face and mobile body.
This session features not only Buzzy, but Wild Bill Davison, cornet; Bill Allred, trombone; Chuck Hedges, clarinet; Bob Pillsbury, piano; Jack Lesberg, then an unidentified string bassist; Carol Leigh, vocal. 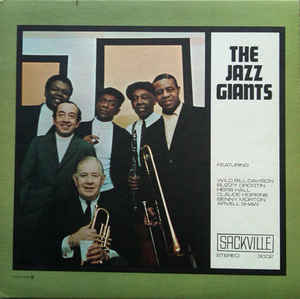 The songs are YOU’RE LUCKY TO ME / SLEEP / NOBODY’S SWEETHEART (featuring Bill Allred and Buzzy) / EXACTLY LIKE YOU (Carol Leigh) / I’LL BE A FRIEND WITH PLEASURE (Leigh) / UNDECIDED (Leigh and Wild Bill) / AVALON (Buzzy) // For the second set, the unidentified bassist replaces Lesberg: LADY BE GOOD / IF I HAD YOU / HONEYSUCKLE ROSE / KEEPIN’ OUT OF MISCHIEF NOW / STRUTTIN’ WITH SOME BARBECUE (Buzzy) //.
Thanks to my dear friend and great jazz drummer Bernard Flegar, I now know that this took place in Malmö, Sweden, in 1984, in a large hall — Wild Bill remarks on it — where food and presumably drink are being served to a quiet audience.  Both the camerawork and the sound are reasonably professional, so it’s clearly not an audience effort.

All that aside, listen to and watch Buzzy as he holds not only the band, but the music, on his shoulders, grinning away.

Thanks to Tony Drootin for being enthusiastic about this posting, and thank you, Buzzy and friends, for the wonderfully memorable noises.

Posted in "Thanks A Million", Bliss!, Generosities, Hotter Than That, Irreplaceable, It's A Mystery, It's All True, Jazz Titans, Jazz Worth Reading, Mmmmmmmmmmmmm!, Pay Attention!, SURPRISE!, Swing You Cats!, That Was Fun!, The Heroes Among Us, The Real Thing, The Things We Love, Wow!